The family behind some of RVA’s brightest holiday lights

Back in 1974, a kid fell in love with decorating his house with Christmas lights. That love has turned two Henrico homes into the epicenter of tacky lights, and earned him recognition on TLC. For most of the year, the houses at 9604 and 9606 Asbury Court are typical Henrico County homes one finds near Regency Square mall. But between Thanksgiving and the new year, the homes become anything but ordinary. Holiday lights and hand-crafted designs cover and bedazzle the facade and lawns of both homes, turning them into a tiny wonderland of holiday kitsch.

Featured on TLC, the homes have a become a landmark among fans of holiday lights from as far away as Delaware and North Carolina. While some describe the abundance of holiday lights as tacky, the inspiration behind the annual displays–now in their 38th year–is anything but.

“I do it for people to enjoy,” said Robert “Bobby” Phifer in the driveway of his home at 9606 Ashbury Court last Saturday afternoon. “It’s a fun thing to do.”

His predilection for holiday decorating began in 1974 when he helped his mother decorate her own home, next door at 9604. Phifer said they had enough lights to only decorate the door, one window, and two bushes. It was typical holiday decorative fare, the kind not uncommon at other homes. But the Phifer’s holiday decor is different than most others in one key regard: “Every year it’s grown.”

The reason? “I’ve alway had a thing for lights,” Phifer said. “When you can’t draw” or paint or possess any other traditional artistic talent, he said, arranging and creating lights became “my kind of art form.” Since 1974, Phifer has “never missed a year decorating.” 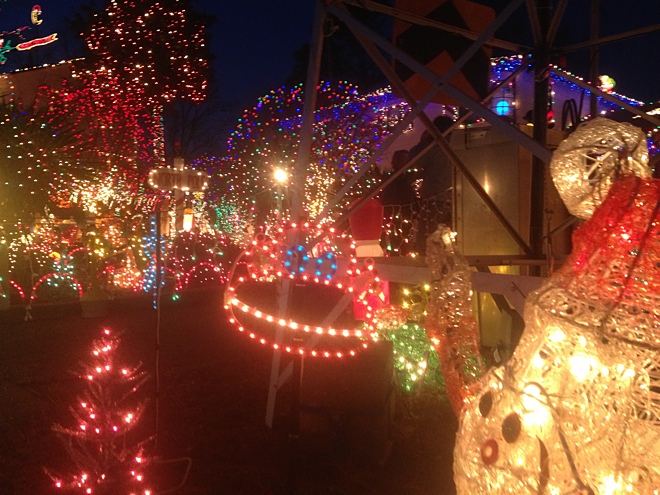 By age 10, he was proficient with a circular saw, creating home-made designs to put in the front yard at the holidays. “I was always tinkering and making stuff,” he said. Before he could legally drive, Phifer said to himself: “When I get a house I’m going to have the biggest display.”

True to his word, in June 2004, Phifer and his wife, Bobbie, purchased the home adjacent to the one Phifer grew up in.

While the exact arrangement of displays vary slightly year to year as the number of lights and figures increase, Phifer said it typically takes two and a half months to put up the lights (and two to three weeks to take down).

He uses 69 20-amp breakers for power at both his and his mother’s house, allowing the family to turn on and off the lights at will. “Anything I find that I can put a light in, I’m going to light up,” he said. When asked how many individual lights he owns, Phifer gives a sensible response: “Don’t know. Never counted.”

However, he does know that that the power bill at each house “goes up over $1,200” during the holidays because of the lights. He also estimates he and his family use about 70 rolls of electrical tape each year and about a half mile of electrical wire. Phifer said that theft, while minimal, has always been a constant. However, it decreased three years ago when a stranger, upon learning that the Phifer’s didn’t have the money to install security cameras to monitor their decorations, voluntarily installed a system out-of-pocket (there was only one theft last year).

While Phifer doesn’t know the exact number of lights he owns, to give you an idea of just how large his holiday haul is, consider the needed storage. Phifer’s mother has a 10′ x 12′ shed in her backyard to hold decorations (“That shed is packed,” he said). Not to be outdone, Phifer himself has a 24′ x 31′ garage “full” of decorations in his backyard. Despite the decorations being in use from Thanksgiving to the New Year, decorating is year-round job.

A full-time employee at Binswanger Glass, a multi-purpose glass installation company based in Richmond, Phifer will use non-December holidays to work on decorations.

While we chatted, he walked me down his driveway to a 17-foot tall structure. “This is new this year,” he said. The Santa Tracker.

Built during the Fourth of July weekend, it looks like a retro oil drilling rig. On the top is a pirouetting satellite (an old Dish TV satellite) monitoring the movements of the North Pole resident. At its base is a computer monitor that displays a radar-mimicking screensaver, meant to add a bit of playful authenticity for the younger crowd. Built when most people are at barbecues, Phifer and his family seem to always have the holidays on their mind. “Christmas is all year for us.”

Another addition is an illuminated sign that reads: Love All. Phifer explained the reason for it is the number of people from varying religious traditions that visit the homes.1 “It’s for everybody,” he said about the displays, not just those that celebrate Christmas. 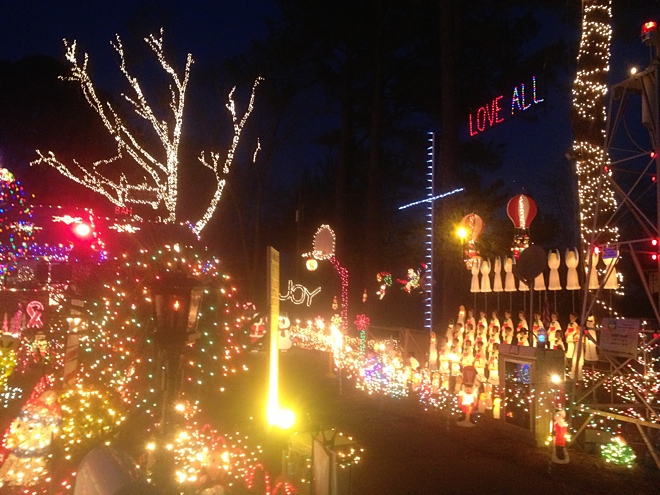 Phifer and his wife fondly recall stories of people who have thanked them for what they’ve done. From people who’ve been laid off, had beloved family members recently die, or any other traumatic life events that can keep someone from enjoying the holidays, so many have approached the Phifers to express gratitude for the displays that put downcast visitors in the Holiday spirit. “Knowing you can give people joy…and lift [their] spirits” helps motivate the family each year. He said his homemade exhibit remains free–although the Phifers do accept donations.2

But not everyone is happy with the lights and their subsequent attention.

While Phifer says that most of his neighbors are supportive (or at least accepting) of the extraordinary displays, one neighbor has been known to repeatedly speed through crowds in his car, rolling down his window to scream at the Phifers and onlookers. “Last year I almost watched him get his butt beat a couple of times,” Phifer said because of the neighbor’s reckless driving around visitors who gaze at the displays from the street.3

That neighbor’s displeasure is with warrant. As a result of the displays, the two homes in a neighborhood cul-de-sac have seen an influx of buses and limousines, all part of various holiday light/tacky light tours. Last Thursday, Phifer counted six buses and four limousines that sometimes block traffic and make an otherwise quiet block resemble the parking lot of the Diamond after a Flying Squirrels game.

As a result, Henrico Police will occasionally direct traffic to alleviate standstills. However, Phifer, who is a former EMT that worked at nearby Tuckahoe Rescue for 10 years, said that local police are supportive of his efforts (often, when the family is putting up lights, police will drive around and ask him “anything new this year?”).

Despite the peeved neighbor and the traffic overflow, most people appreciate the Phifer’s contribution to the holidays. This is perhaps best represented when, two years ago after a disastrous mismanagement and misunderstanding with their mortgage company, Phifer said he and his family “almost lost the house.” Richmonders not only donated money to supplement the family’s income, but also their resources. Phifer said that high-ups with institutions like Wachovia, as well as the general public were so outraged, they personally called the Phifer’s mortgage company to resolve the issue.4

Around the same time that the Phifer’s were in danger of losing their home, their water heater malfunctioned, and a local man installed a replacement one. “Richmond saved our ass,” Phifer said. “We were floored by how it turned around…I owe Richmond.”

The love and appreciation that the Phifer’s have for Richmond is just another reason why they do what they do each year, and the Phifer’s have no interest in stopping either. They’re already looking to make next year’s display even bigger.