The Conspirator: See how it all really happened (we think?)

Robert Redford’s new movie about the suspicious trial procedures for one of the alleged conspirators in Lincoln’s assassination is…just that!

The American Film Company, a production company that started in 2008 making historically authentic features about our country’s past, puts a lot of stock in Richmond’s opinion. At least that’s the impression they conveyed at the screening of their new film, The Conspirator, which tells the story of the Mary Surratt’s shady trial as one of Lincoln’s assassins. 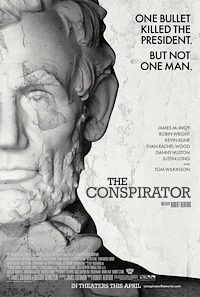 The audience of this and other cities’ screenings of the film has been lawyers (courtroom drama!) and historians (OMG Civil War!). I felt sure the next words out of producer Robert Stone’s mouth would be “…and also movie buffs!” Directed by Robert Redford* and starring a bunch of talented A-listers (James McAvoy, Robin Wright, Rory Gilmore), the film’s credentials are nothing to sneeze at, so I was surprised when it became clear that they weren’t banking on movie nerds to get the word out.

Welllllllll, I found out why pretty quickly. As movies go, The Conspirator isn’t that good. It’s very informative and makes for a perfectly fine evening out, but the tone and the pace seemed dated. And not 1865 dated. More like 1995 dated. A little dramatic, a little overloaded with swelling music, and a lot romanticized. I’m not a Civil War enthusiast, but I did sit next to one (RVANews’s very own Phil Williams!). Phil explained to me there are a ton of books written about Lincoln’s assassination, but only a few about the inconsistencies of Mary Surratt’s trial.

And the trial was heinously inconsistent, according to the movie. The country wanted revenge and revenge they took, at the expense of Surratt’s Constitutional rights. “This script stuck with us,” Stone recalled of the screenplay written by James Solomon. The company chose it from among 300 to 400 good, historically authentic options, and set about turning it into a compelling feature with as much attention to detail as possible.

To me, the lighting was the most striking historical aspect. According to Stone, they used only the natural and gas lighting that would have been available in buildings during the time. The effect is interesting, but it appears to have had some digital help in order to make the action visible, which results in a sort of overly filtered, “made with a vintage camera app on an iPhone” look.

Anyway, the acting was decent. Robin Wright was pretty convincing as the serene yet troubled Surratt, and McAvoy delivered a typically adorable performance. But, as Phil aptly put it, “There’s some sort of exaggerated gravitas that actors assume when they’re in a movie like this, like they have an expression on their face that seems to say ‘I’m in a CIVIL WAR movie!'”

I don’t know, guys, I’m trying hard not to be skeptical about this one. They insisted over and over that authenticity is their main motive, and I’m sure that’s a large part of it, but the screenplay itself was pretty emotionally manipulative. And that’s fine, that’s how movies are. You sell a story from a certain point of view. But you have to be willing to admit that you’re leading the viewer to believe one thing and not insist that you’re simply retelling the facts.

Whatever you want to believe, you’ll find The Conspirator to be an engaging tale that’s told fairly well. I look forward to the American Film Company’s next effort, a feature film about Paul Revere. It’s sure to be a “wild ride.” A WILD RIDE, Y’ALL! Revolutionary humor! One if by land!

The Conspirator opens on April 15. For maximum historical effect, I recommend finding Phil Williams and sitting by him.