This past Friday, Bow-Tie Cinemas opened their new independent-focused theatre with a slate of four movies, including The Comedy. This past Friday, Bow-Tie Cinemas opened their new independent-focused theatre, Criterion Cinemas. It sits in the middle of the Movieland parking lot, and in that tiny building they’ve somehow crammed four, small, stadium-seated theatres. It’s kinda incredible that two bathrooms, four theatres, and a small concessions counter all fit in there, but fit they do! They also smell like a brand new car.

I’m pretty sure I was their very first customer, and as such I got to help them work out their opening-day kinks (of which there were a couple). The theatres are small, two 60-seaters and two 100-seaters, but the screens are pretty big. I think I was in one of the smaller theatres and even in the very last row I felt like I was too close to the front.1 There was also some light leaking out of the projection booth onto the screen–which you’d think they would fix. But overall, you’ve got to be excited about a new place to watch movies that would normally never show in Richmond.2 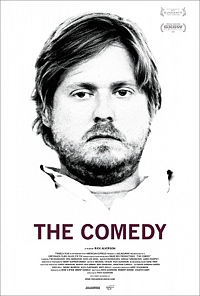 Out of Criterion’s opening slate of The Central Park Five, The Comedy, A Royal Affair, and Sleepwalk With Me, I ended up at The Comedy for a couple of reasons. Foremost it’s directed by Richmonder and VMFA Visual Arts Fellow Rick Alverson. Second, it’s got those Tim & Eric guys in it. Third, it’s about hipsters.

After the New York Times ran this piece disparaging all things hip for their utter lack of sincerity,3 the topic of hipsters has been on the tip of everyone’s virtual Twitter tongues. The NYT article, in particular, attacks the Williamsburg variety of hipster: the well-off, portly, poorly facial-haired Brooklyn resident that has no real love of anything, only a sarcastic comment for everything.4

The Comedy is about these very people! It’s also not about comedy. At all. It’s a couple of days in the sad, sad life of Swanson (Tim Heidecker) as he waits for his rich father to die so he can carry on with his sad, sad life. Although, if you asked Swanson if he thought his life was sad, he’d probably tell you it wasn’t–well, he’d probably deflect with some sarcastic, offensive, non sequitur.

Swanson and his friends are desperate to feel a feeling, any feeling really. They do things that normal people do to experience feelings (go to church, look at old family photos) but they’re so utterly lost that they’ve forgotten (or are desperately hiding from) what a real life, a real feeling, or any sort of real anything looks like. So when they go to the church, they blow out all the candles, obnoxiously creak around in the pews, and improvise Gregorian chants. It’s punishing and hard to watch in that special, Tim & Eric way.

And, sure, this movie uses hipsters as the vehicle for conveying its message–which makes sense as Alverson is from Richmond after all–but it could just as easily have used any other subculture. It’s less about PBRs, fixed-gear bikes, and cutoff shorts, and more about refusing to participate in life in a meaningful way.

Hello, directed by a Richmonder! Also, it features Richmond’s own Liza Kate in a supporting role, so that’s pretty awesome! And if you can’t stop thinking or talking about that NYT article, this film makes a great companion piece.

If you’re afflicted with hipster hate, then this will be a challenging movie for you. If you don’t want to take two hours of punishment, that’d be a reason to stay home too.