The Bolivian Dance Parade, or maybe the most fun thing at this year’s Folk Fest

A parade of 200 performers in intensely elaborate costumes doing centuries-old dances and enjoying every second of it. Bolivia! Nelly Zapata came to the United States 26 years ago as an immigrant who had, in her words, “some extra luggage,” hundreds of years of heritage to pass along.

Along with other native Bolivians–and along with natives from all sorts of other countries–she’s determined to keep the customs and culture of her homeland alive.

Bolivia is a very dance-focused culture, which, if you ask me, is maybe the best kind of culture. They’re really into carnivals, doing specific dances that represent different things, wearing costumes and masks that are as rich in texture and ornament as they are in color. Carnaval de Oruro, the biggest carnival, is more than two centuries old, and sounds a heck of a lot more fun than anything we have going on in this country. Except, of course, Mardi Gras. This hour-long video has all sorts of footage from last year’s Oruro–just look at various point of it at random, and you’ll get the drift.

“We have more than 300 dances back home,” says Nelly, who heads the Comite Pro Bolivia based in Arlington. Their performances have gotten too big for Arlington now, though, and they have to head to the Manassas Fairground.

They prepare all year for the Richmond Folk Festival, where this year they will lead a parade that Nelly promises me will be unlike anything I’ve seen before.

Each costume comes from Bolivia–they refuse to manufacture them in the U.S. And each costs as much as $2,000, not including the shipping costs associated with getting a four-foot handmade mask to another continent without damaging it.

Dance groups come together to compete, usually, and on Saturday, they’ll be forming one long parade.

Nelly has trouble deciding on a favorite dance, but some highlights include: 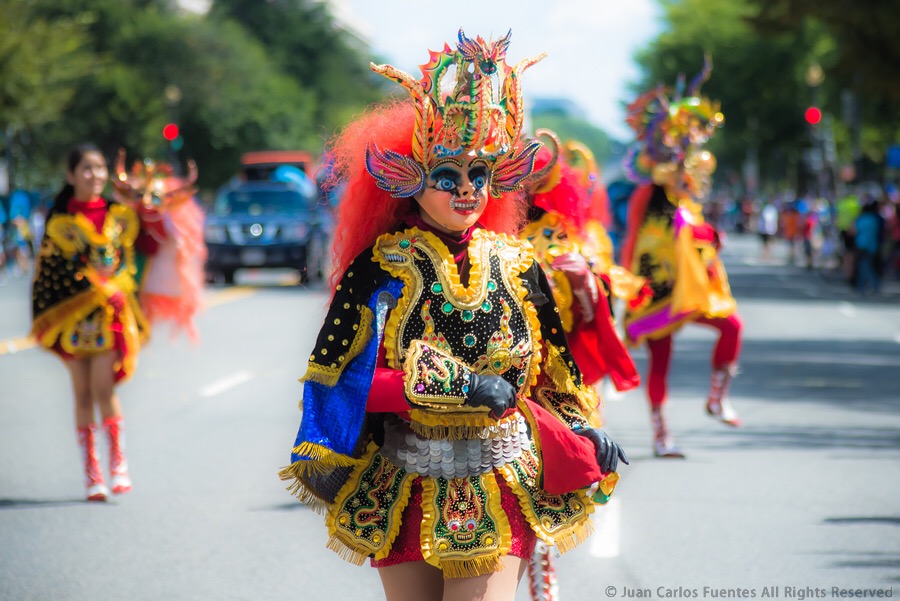 It’s customary to make a promise to the Virgin Mary before you join a dance group, and Nelly Zapata’s promise went way beyond the traditional three-year pact. She asked for an end to her daughter Paloma’s suffering (she had been afflicted with some serious health problems), and in return, she would agree to devote the rest of her life to passing down these important traditions to younger generations. Under her leadership, the Comite is the biggest Bolivian culture stronghold in the country.

There’s an entire children’s festival in August, where Bolivian kids 12 and under do their thing, which they begin learning very early. Like two years old early. “I think you have to expose them to it then,” says Nelly. “So they learn and they love the music. Even though I’m from Bolivia, I feel like, “Wow,” when I see those kids dancing; I cannot believe the way that they dance with the heart and the passion that they have.”

She feels like that passion involved in Bolivian dance as well as the passion Americans with Bolivian heritage have about perfectly preserving their culture is why the young people who were born in America fall in love with the custom.

That’s an important aspect of the Folk Festival–helping Americans not just understand but celebrate the fact that other country’s customs ARE our customs. Nelly Zapata is as American as the bluegrass fiddler from Galax, Virginia. Saying “we” and “our” folklife includes all of the immigrants and their progeny. So that’s why it’s not the World Music Festival–it’s the Folk Festival. It’s our folk, America!

The Folk Festival’s site has some great information about Bolivian traditions and the performers we’ll be seeing during the parade. The parade will kick off at 6:30 PM on Saturday, October 10th, departing from the Altria Stage. If you miss it, make sure you head by the Bolivian Mesa (cloth) demonstration at 4:30 PM at the Virginia Folklife Craft Area both Saturday and Sunday.