The Battle of Seven Pines

Gen. McClellan’s forces were knocking on Richmond’s door and the Confederate Army was running out of options. Plus wartime balloons! At the end of May 1862, Gen. George B. McClellan’s Union troops had amassed themselves on the outskirts of Richmond ready to strike a fatal blow to the Confederacy. Union soldiers were so close to the city that they wrote letters home about hearing the church bells toll. It had been nearly six months since McClellan first revealed his plans to attack Richmond from Virginia’s peninsula, and his army had experienced several false starts and missteps along the way. Confederate Gen. Joseph Johnston’s forces defending the peninsula, despite having smaller numbers, always seemed one step ahead of McClellan–pulling back just as McClellan found his momentum. Having safely fallen back to the defenses of Richmond, Johnston’s strategy was now being put to the test.

The majority of McClellan’s Army of the Potomac was encamped north of the Chickahominy River, while two corps remained south of the river–the Fourth Corps led by Gen. Erasmus Keyes and the Third Corps led by Gen. Samuel Heintzelman. Keyes’s troops were located farthest forward and closest to the Confederate line at a place known as Seven Pines.

Rather than subject Richmond to a siege that it couldn’t survive, Johnston decided to take the offensive against the Federal forces. After heavy rains rendered the Chickahominy River swollen and nearly impassable, Johnston saw an opportunity to attack with superior numbers. He made plans to strike and overwhelm Keyes’ Fourth Corps and then push Heintzelman’s Third Corps up against the river, knowing that the flooded Chickahominy would hinder reinforcements.

Johnston’s offensive strike was set to occur on the morning of May 31st. Unfortunately for Johnston, it was doomed from the start. The plan required troop movements eastward along three main roads: Nine Mile Road, Charles City Road, and Williamsburg Road. But poor communication resulted in the 1862 equivalent of a traffic jam. The actual assault didn’t get underway until around 1:00pm, and it was a disjointed affair with far less troops engaged than initially intended. Despite the poor coordination, the Confederate troops managed to make significant headway against the Fourth Corps. 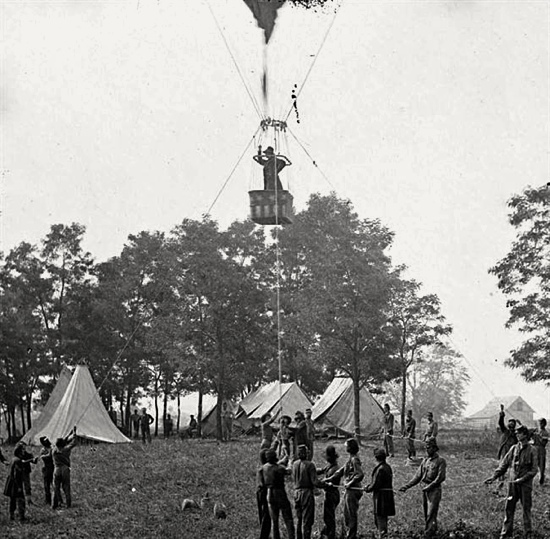 Meanwhile, north of the Chickahominy River, Prof. Thaddeus Lowe, commander of the Union Army Balloon Corps, sighted the Confederate troop movements from his hot air balloon, the Intrepid. After receiving the reconnaissance report, McClellan ordered Gen. Edwin Sumner of the Second Corps south across the river to reinforce Keyes and Heintzelman. The lone remaining crossing point, known as the Grapevine Bridge, was dangerously close to collapse due to the flooded river. When Sumner arrived, the engineer responsible for building the bridge, Colonel Alexander, begged Sumner not to cross. Sumner replied “I can, sir! I will, sir! I am ordered!” Sumner sent his troops over the bridge despite the danger and it held together, falling apart shortly after the last of the reinforcements crossed.

With the help of Sumner’s Second Corps and Heintzelman’s Third Corps, the Union forces were able to hold the line south of the river and prevent themselves from being overrun by Confederate forces. As the day drew to a close, the fighting had largely ended in a stalemate.

Arriving on the battlefield near dusk, Gen. Johnston began riding behind the Confederate lines to coordinate the next day’s renewed assault. After a member of his staff warned him that he was riding too close to the front lines and within range of enemy fire, he replied “Colonel, there is no use dodging; when you hear them they have passed.” Moments later, a bullet ripped through his right shoulder, followed by the burst of a Union artillery shell above him, sending shrapnel into his chest and thigh and knocking him off his horse. Still alive, but seriously wounded, he was put in a wagon and sent back to Richmond.

The Confederates renewed the fighting the next morning with Johnston’s second-in-command Gen. G.W. Smith in charge, but made very little headway and withdrew at 11:30am. With Johnston incapacitated, President Jefferson Davis knew he needed a decisive leader to carry on the offensive and appointed Gen. Robert E. Lee as the commander of the Army of Northern Virginia. Lee, who was serving as a military advisor to Davis at the time, did not have a lot of public support and was seen as timid and ineffectual to many in Richmond, but he had the trust of Jefferson Davis. The appointment of Lee would later be seen as one of Davis’ best decisions. Lee would hold the command of the Army of Northern Virginia for the remainder of the war.

Observing McClellan’s movements for several months now, Lee felt he had an understanding of McClellan’s weaknesses and he planned to exploit them. For the remainder of June, he would prepare for an aggressive assault to push McClellan back down the peninsula. He wrote to Davis on June 5th, “I am preparing a line that I can hold with part of our forces in front, while with the rest I will endeavor to make a diversion to bring McClellan out. He sticks under his batteries & is working day & night.”

The enemy was still at the gates. If Richmond was to be saved, it would need to happen soon.