Ever wonder whether it could be possible to bring the family to the fair and get no joy out of it whatsoever? Now it is! It’s a Saturday morning with an on-again, off-again drizzle, and my three-year-old son is STOKED about the Ferris wheel. It’s all he’s talked about all morning, all through the 30-minute drive to Doswell.

At this point, our spirits are high. We got out of bed at a reasonable time, we’re going to make it to the State Fair of Virginia bright and early before the large and often unruly crowds, and, the schedule says, we’ll be just in time to catch a tractor pull. Whatever that is.

“What IS a tractor pull, even?” I ask my partner.

I stay quiet, because I don’t want to sound ignorant. Does a tractor pull things? Or does a tractor get pulled? I barely knew what a tractor was before I birthed a child who emerged from my body preprogrammed with the names of all trucks and construction equipment.

During my own childhood adventures at the State Fair, long before it moved out of the Richmond Raceway Complex in 2009, I spent most of my time winding around the giant pumpkins, touching the quilts, being grossed out by the cakes (by then grotesquely melted several days after judging), and maybe eating a hot dog and riding the swings. My favorite part was probably the Native American Village, where tribes did some dances and demonstrations, and for a second you could imagine yourself in a different world.

In no way am I trying to say that the State Fair of my youth was EVER the romanticized State Fair in my imagination, with blueberry pie-eating contests and lunch basket auctions, strong-man competitions, and Wilbur looking triumphant under Charlotte’s web. I don’t know when those fairs existed, but I’m guessing the grassy fields and straw boaters aren’t a thing anymore. Or maybe they never were–all I have to go on is the movies, and everyone was pretty shiny and cleaned up in those golden age depictions, wearing their gingham and proudly showing off their prizewinning watermelons.

“Why Daisy Jenkins, did you win the blue ribbon again?”

“Yes, ma’am. I just watered it every day, kept putting eggshells and pure love into the soil, and made sure it had plenty of sunlight.”

“Well, what are you waiting for? Cut it open and let’s see who can spit seeds the farthest!”

The State Fair has moved to the Meadow Event Park, which is a beautiful space–rolling hills, tidy landscaping, and ample parking. At first glance, it would seem the perfect place for a fair–more apt, certainly, than the Raceway Complex. I could almost see Daisy sitting on a hay bale and polishing her 126-pound watermelon as we pulled up.

But there’s just something missing. The setting is right, the prize pigs are there, the corndogs are in abundance. But none of it feels homey, so much of it feels seedy, and the whole thing is far too much like an agricultural-and-fried-food-themed amusement park.

The State Fair of Virginia went bankrupt in 2012 after a couple of years at its new location failed to produce the results it needed to offset the enormous cost of converting Meadow Farm (birthplace of Secretariat!) to Meadow Event Park. A company called Universal Fairs picked it up, eventually turning it over in its entirety to the Virginia Farm Bureau.

I can’t tell whether or not the smaller, more genuine variety of fair is simply impossible in this day and age, but there has to be something between charmingly old-fashioned and blandly contemporary. Because the rundown, somewhat shady parts of fair livin’ clash horribly with the slick new pathways and flower sculptures. The result is depressing–yards and yards of white vendor tents next to the glaringly bright food purveyors, leading you in a boring loop in which the same Tiki Tea repeats itself and you can do virtually nothing without spending a ton of money. 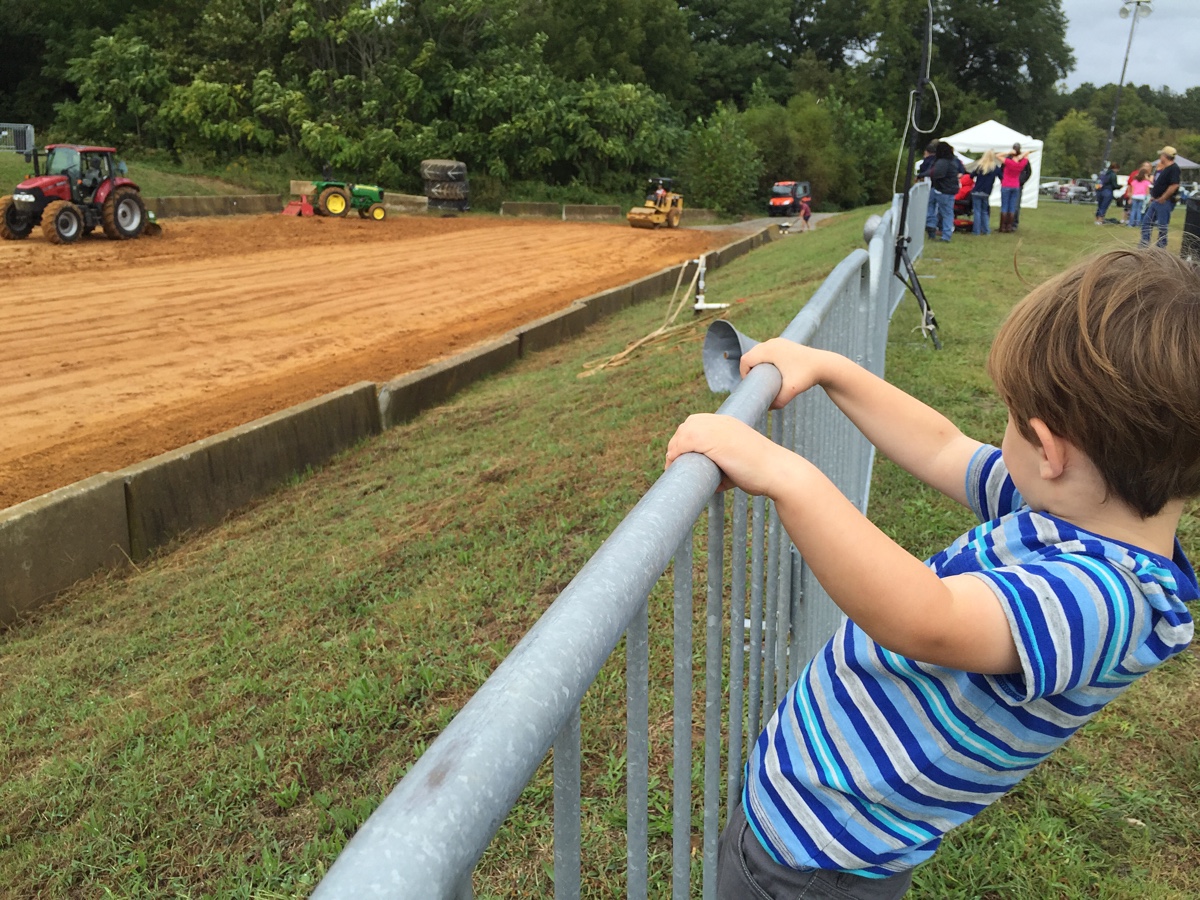 No tractor is either pulling or being pulled.

The tractor pull, scheduled for 11:00 AM, was still trying to get itself set up by the time we gave up waiting for it at 11:25. No announcements, no change on their sign, just…no tractor pull. My son was fed a few lines about how the tractors wouldn’t be coming today after all, and as his face began to crumple a little, we reminded him that we were heading towards the Ferris wheel.

As soon as our feet hit the midway pavement again, the tune of “Can I have something to eat? Can I have something to eat?” played in our ears until we hit the pig races. While entertaining for about ten to 30 seconds, depending on the variety of pig, the rest of the pig race experience was dull enough to make our eyes go from bored sheen to approaching despair. The entire situation lasted only about 15 minutes, with 14 of those minutes involving a man yammering at us in pork puns, thanking the sponsors, and asking for money. 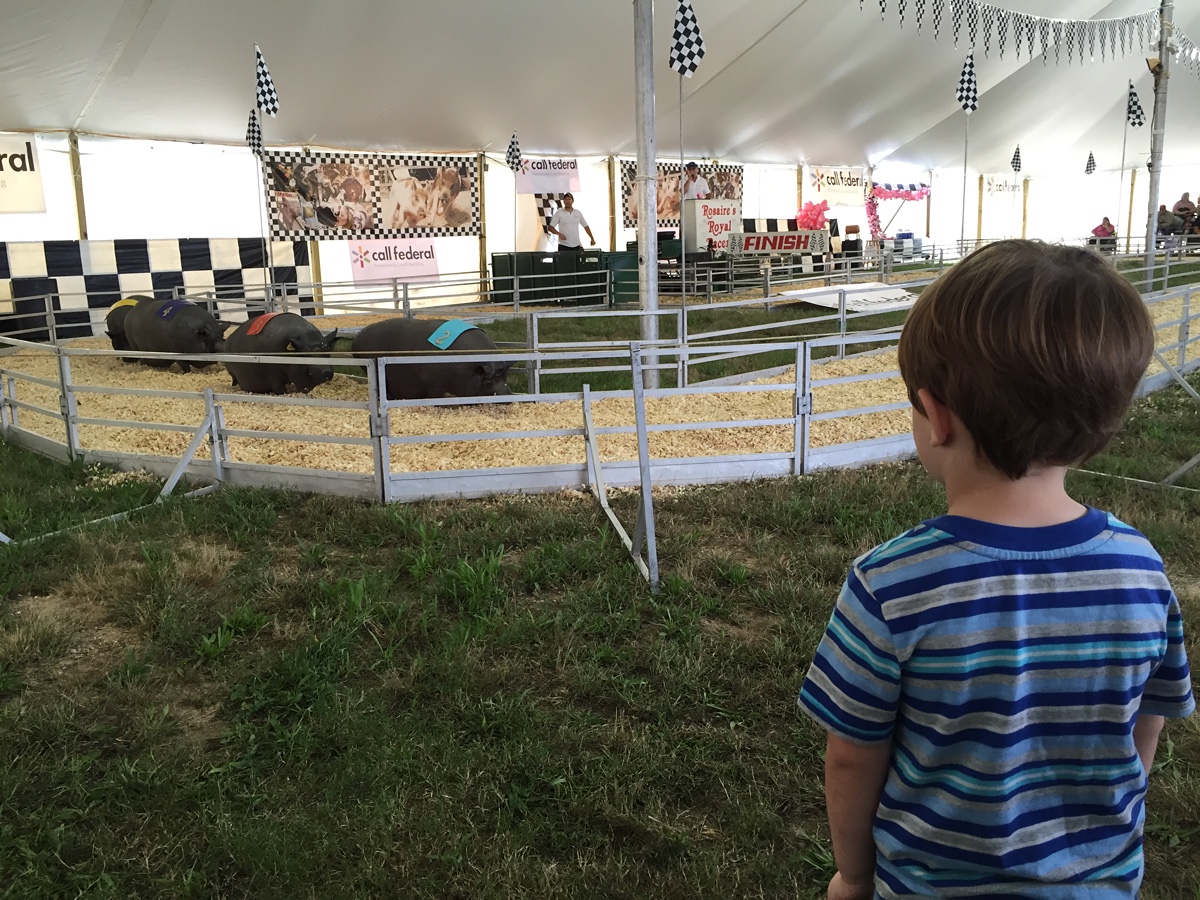 We spilled out into the light again, the suggestions that it might be snack time resumed, and I noticed on the schedule that it was almost time for the pumpkin weigh-in. Rather hopefully, the three of us shlepped up a long hill to the agricultural area, one of us pitching Ferris wheel and/or snack requests as fast as the other two could field them. I felt my spirits rise as I saw the horticultural tent. This was where we’d see the blue-ribbon corn and admire the succulent gardens of kids who tried really hard and at whose work we’d smile indulgently. This was where we’d see the very pregnant cows and some of the new calves, or maybe some sheep being relieved of their wool, or maybe some piglets!

And guys, we saw all of those things and more. Tons of things. The horticultural tent (which also housed the pregnant cows, bunnies, and all sorts of other animals) was filled with wonders. Many wonders were pooping everywhere, to my child’s delight, and many of them were touchable. But the novelty wore off quickly, and pleas for the Ferris wheel resumed. “But look at that enormous pumpkin!” “Do you know what? A Ferris wheel is also enormous.”

What we should have done is just gone on the Ferris wheel first. I get that now. Once he actually rode on the damn thing (the kids’ version, by the way, we didn’t get to go anywhere near the adult rides), he stopped talking about it and moved onto Desire B: food. 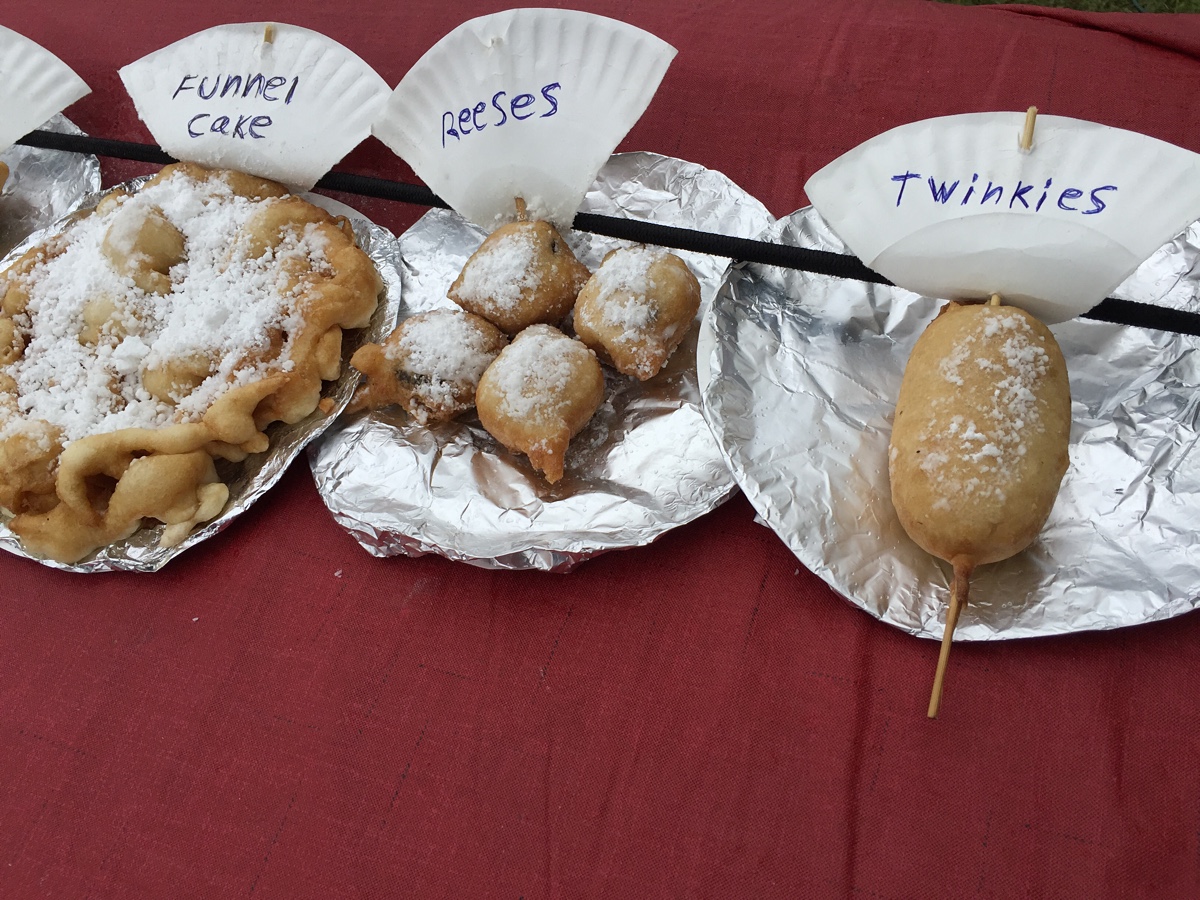 If you’d like to see two adults paralyzed with indecision about what to feed the world’s pickiest eater, well, then, you should have responded to our eVite. It’s not that we were trying to find him something he would eat, mind you, it’s that we were trying to find him something we wanted him to eat. We were surrounded by disturbingly obese children shoving fried Snickers bars into their mouths as their parents downed giant sodas. The smell of it all had already begun to make the primitive synapses fire in my son’s brain, connecting “smell of sugary batter hitting hot oil” to “must store up fat for winter.” It was lunchtime and our options were limited to pizza, turkey legs, and the smorgasbord of fried candy, fried cookies, fried PB&Js, fried butter (an entire stick!), and fried nerves.

Well, it’s the fair, we thought. We have to have a fried Oreo, right? One plate contained four, and we each had one and shared the other. Before the last bite of fried dough had even made it down his esophagus, my son burst into yearning tears. Tasting something so heavenly and then knowing that he was doomed to another weekend ahead of him of us presenting him with only healthy things…it was just more than he could bear.

So, we set off for home. It was about 20 miles on foot back to our car, and it took about four days. A tearlessly wailing child plodding behind us in a yellow raincoat, we had to make our way back through more food stands and more clouds of fried-dough-scent. Right at the apex of the hill, we sat down on a curb and waited for him to calm down. He sat so far away from us and looked so miserable that two security guards began to raise eyebrows at this forlorn little child who had obviously been abandoned by terrible adults, since it’s not possible he could be sulking loudly because he had been given a fried Oreo and now it was entirely finished. Yes, we assured them. It’s possible. It’s happening. Just ignore his pitiful Sylvester Stallone lip and he’ll come back over to us when his drive to talk about trucks overpowers his drive to teach us a lesson that supplies of fried Oreos should be neverending. 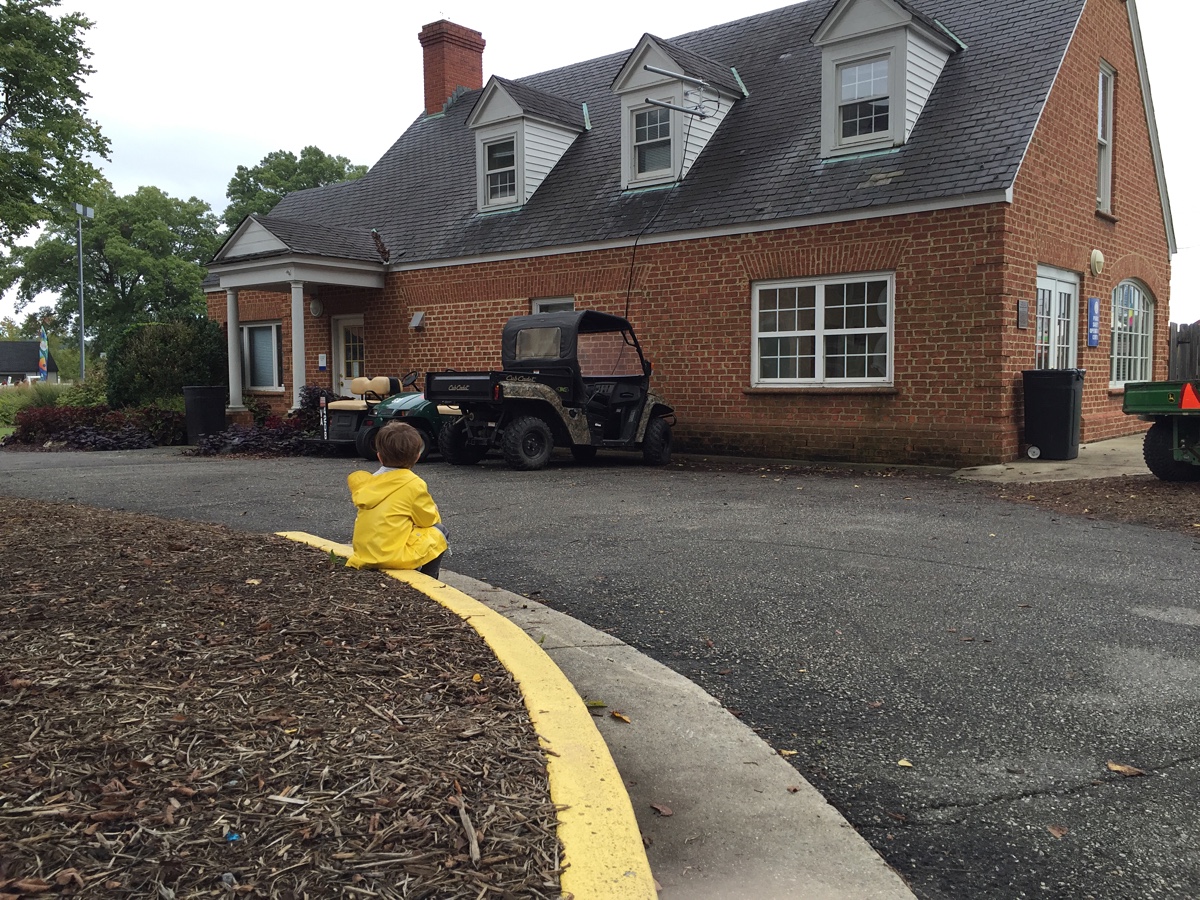 We sat on the curb and waited, and I realized that where we were was the Native American Village, which it has now been expanded into a “Heritage Village”1. My research tells me it pulls in “African American” stuff now, too, and I shudder to think of what we might have found in there. I strained my ears to hear any signs of some tribal dancing, but all we could hear was a sudden cannon boom, followed a few minutes later by some rifle shots. Oh, a Civil War reenactment. Great.

Guns were the last straw. It was time to call it a day, and we had a real lunch to try to muster up.

A word about pricing

I think I could have forgiven the State Fair many things if our pockets weren’t plumbed at every turn. Two adults and a toddler on a kid’s Ferris wheel: $15. A plate of four fried Oreos: $5. Things we didn’t end up getting but noted their price with shock and horror: A bottomless root beer: $15. A slice of pizza: $5 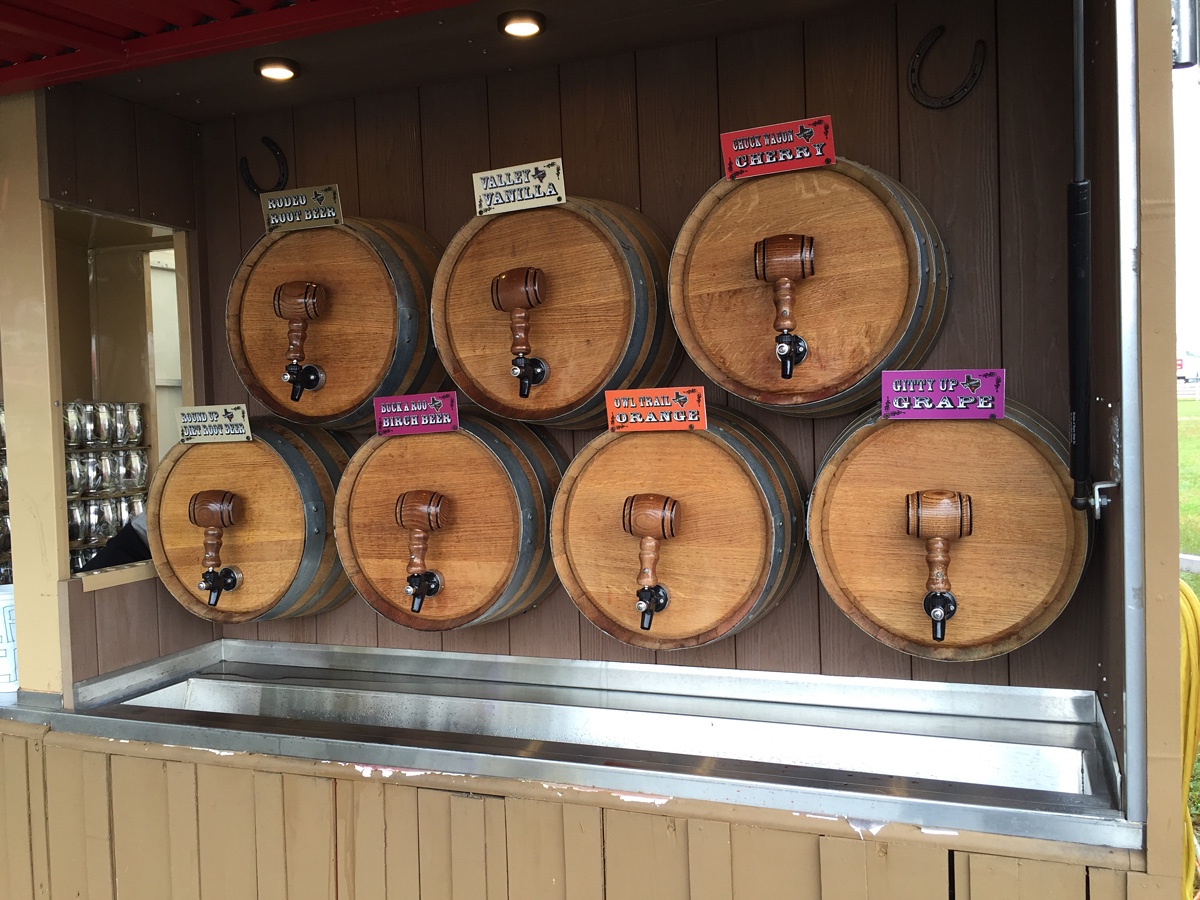 The world’s most expensive root beer.

If I’d paid admission, which I did not, that would have been another $30. At this rate, we would have had a much more solid time at the real theme park down the road–better rides, better food (or at least cheaper food), and fewer hot tub vendors. Staying for an actual lunch would have put us well into the $75 range, and hitting a few more rides would have meant a second mortgage on my house.

We missed some of the Big Bike Race™ for this?

The State Fair as an agricultural showpiece? Sure. A price-gouging low-quality theme park? No.

To my mind, the fair needs to choose what it wants to be and stick to it. The charm that brought people here for so many years has gone AWOL. That’s unavoidable, maybe, but something else has to be done to make up for it. Otherwise you’re punching out of your weight class in a ring reserved for Kings Dominion and Busch Gardens, without any of the payoff to make up for it.

At least these pigs were enjoying themselves. All but the mother, I guess.