Even though Catrow and his sliders-and-fries special move put up quite the fight there for a while, Carnam and her homage to Legend’s Belgian White walked away with a solid victory last week. You go, girl! Now on to week 3…

Voting for week 3 of Supper Punch!!! is now closed. Our winner was… Jennifer Carnam! Again! Congratulations to Jennifer and thanks to everyone who voted. Tune in Wednesday for week 4. It’s gonna be great.

Even though Catrow and his sliders-and-fries special move put up quite the fight there for a while, Carnam and her homage to Legend’s Belgian White walked away with a solid victory last week. You go, girl! Now on to week 3…

Our competitors:
Sarah Bonkovsky, tireless contributor to Fan of the Fan and a gluten-free mother of three who loves to eat food from her own and nearby gardens. She also describes herself as “slightly lazy, distracted, and messy in the kitchen.” Don’t let her self-deprecating tone fool you — she can BRING IT.

Enough dilly-dallying. On to the food! 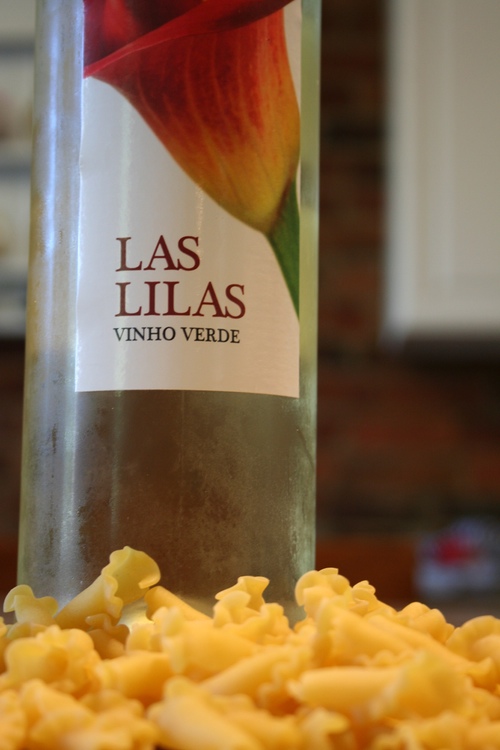 As the weather turns (somewhat) cooler, I start going to my comfort foods for dinners. This week I made a family favorite: pasta carbonara. You can use whatever pasta you’d like, but this time I tried campanelle, which means “little bells”. I thought it was a pretty shape and capable of holding all the tasty sauce.

My recipe has changed a bit over the years and now I have combined what I think are the best elements of Jamie Oliver’s and my mother-in-law’s recipes. Jamie uses cream instead of milk and egg yolks instead of whole eggs. My mother-in-law pours some white wine in the pan with the onion and bacon to de-glaze it and add a little more depth to the rich, creamy sauce. Drink a big glass of the wine while you’re cooking and after a while you won’t even hear the kids.

Gluten-free note: reserve a bit of the sauce and meat to pour over another type of pasta. A GFF’s (Gluten-Free Friend’s) recommendation: quinoa pasta. It’s tasty. 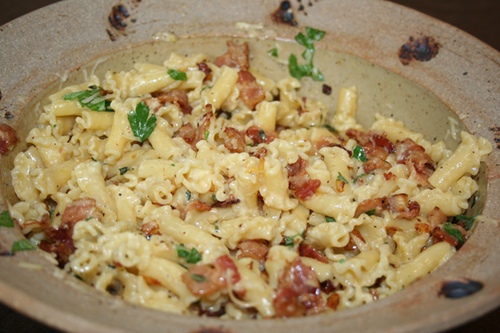 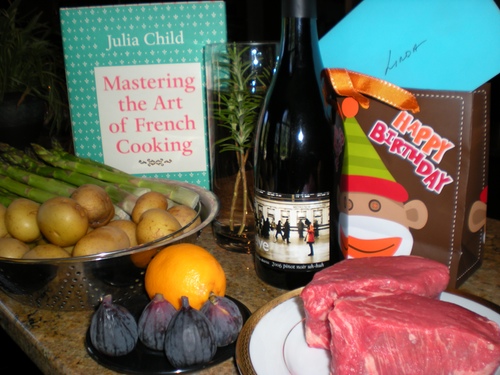 This week’s meal was a command performance for my friend Linda, who was celebrating her birthday. Linda requested steak, potatoes and asparagus. I chose filet mignon, which is one of the leanest cuts, in portions of about 2.5 – 3 oz each.

Linda and I took an unforgettable trip to Paris last April, so I felt it was only apropos to let Julia Child guide me in cooking the asparagus using the French method. After peeling the large spears, I tied them in a bundle with kitchen twine and dropped them in a pot of boiling salted water. While the spears were boiling, I whisked together egg yolks, butter, Meyer lemon juice, fresh orange juice and some grated orange rind to make the Sauce Maltaise, a lemony-orangey twist on the traditional Sauce Hollandaise.

For the appetizer course, I grilled fresh Mission fig halves wrapped in Prosciutto di Parma on fresh, deck-grown rosemary skewers. I tossed the remaining rosemary stripped from the skewer sprigs along with fresh chopped parsley (also from the deck) with the baby Yukon Gold potatoes and some extra virgin olive oil and roasted them at 350 for about 30 minutes.

While my husband worked his grillmaster magic on the filets, Linda and I opened my last bottle of one of the best wines I’ve ever experienced: a 2006 Twelve “Uh Huh” Pinot Noir from the Yamhill-Carlton district in Oregon. The folks at Twelve made only 98 cases of this wine, which is no longer available. Sharing a sui generis wine with a truly special friend on her birthday made for a delightful evening. 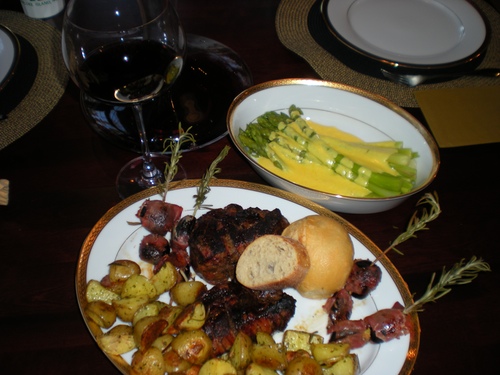 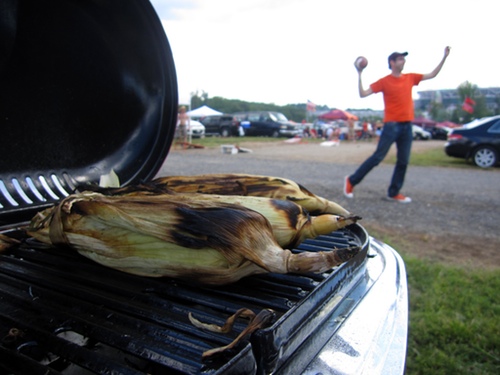 So, as is my sad sad tradition, each year I travel somewhere with my good pals, drink copious amounts of alcohol, eat amazing food, and watch the Hokies lose heartbreaking football games. Woo fun!

The past couple years I’ve upped the complexity of what I cook on my portable tailgating grill (which is totally awesome). This year, at least for the opener, I thought I would GO BACK TO MY ROOTS and do something a little more straight forward.

We’ve got a trio of grilled things. First, we did corn. The key — in my opinion — to excellent corn on the cob is threefold: 1) butter 2) salt 3) smoked Spanish paprika. THIS ISN’T YOUR DADDY’S PAPRIKA. Especially if you are grilling the corn in the husks, like we did, the smokiness of the paprika really punches your face off. Plus loads of butter never hurt anything.

Second (and I made this up on the spot because I happened to have all the ingredients on hand at our tailgate) bacon-wrapped, cheese-stuffed, pickled jalapenos. The jalapenos are from a batch that I pickled using a salt-water brine (hat tip to my co-competitor Nick) that have the weirdest, but most pleasant, smokey taste. Sometimes you hit on a flavor combination that just works, and this is one of those. Smokey, spicy, sharp cheese, BACON. COME ON!

Third, and best of all, the hot dogs. These hot dogs come from, of course, Belmont Butchery — most likely springing forth from the very mind of the Sausage King of Richmond. These will erase and replace your definition of a hot dog. I can’t even explain it to you. Go down there right now and buy them. Sure they may cost more than your average ‘dog BUT IT’S WORTH IT FOR STARING INTO THE FACE OF GOD. No, but seriously, they are pretty good. 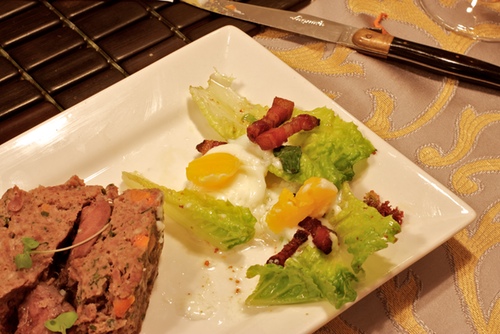 Every once in a while we go all out and spend a few hours making what I call a “french farmer’s lunch”. Bear in mind that I have no practical experience or expertise to know what a French farmer eats for lunch. However, I like to suppose that it is at once hearty and gourmet. The genesis of the idea came from Richmond’s guru of brew, Mekong’s An Bui. We were talking about Dogfish Head’s collaborative brew, Saison du Buff which is a grassy, herby, ale made with paisley, sage and rosemary – clearly a beer that calls for some serious food.

I’ve got a generous neighbor, Travis, who had just gotten back from a dove hunt and shared several pounds of amazing dove breasts. So, looking towards the long weekend I set about to make a paté de campagne with inlayed dove breasts. For the pate, I used some pork from Edmonds Farm, a farm I usually use for bison. Pork shoulder was ground with just a little bit of pork liver, garlic, onions, salt and spices. It was a pungently herbaceous mix that I augmented with a small dice of home pickled carrots. The first half of the raw pate made a bed for the squab breasts and the rest was gently pressed over the top. The whole thing cooked in 300 degree oven in a water bath for almost two hours.

To complete the “farmer’s lunch,” I dropped a few eggs into the sous vide bath. There they sat, in their shell, at 147F for several hours. The result is something we call a custard egg. Eggs done this way are nothing short of sublime. The whites take on a fluffy, custard like texture while the yolks firm up nicely. They are almost the opposite of a poached egg. The custard eggs sat atop a salad of local greens, vinaigrette and some lardons of home cured bacon.

The pate was accompanied by crusty bread, home made pickles and some whole grain mustard.

If I could have done anything different it would have been to find some frisee greens, which would have been more traditional with the salad. They are just so darned hard to come by. 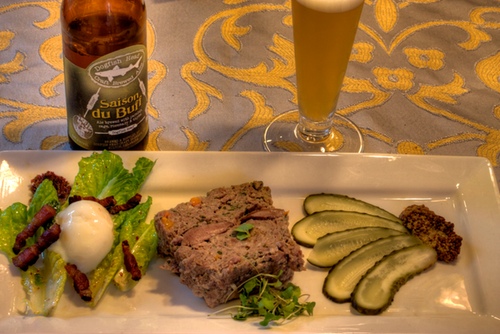 Ok, readers, now it’s up to you. Leave your vote in the comments and help us decide who has delivered….

There are 46 reader comments. Read them.