Spacebomb: Blue since Blau left me

The sessions are long since over, two records wait eagerly in the can, and Karl Blau has returned home to Anacortes, Washington. Karl and Spacebomb sure were busy in February, but in case you didn’t find yourself in the fortunate position of getting to know Karl personally while he was in Richmond, we thought we’d cover that for you.

The sessions are long since over, two records wait eagerly in the can, and Karl Blau has returned home to Anacortes, Washington. Karl and Spacebomb sure were busy in February, and now as we wait as the process continues with mixing and mastering, we can look back at all the fun we had. Lots of hands (and voices) were involved in the making of Karl’s and Matt White’s upcoming records, and even more helped celebrate our launch at Balliceaux. But in case you didn’t find yourself in the fortunate position of getting to know Karl personally while he was in Richmond, we thought we’d cover that for you.

Spacebomb: It was an amazing two weeks with you, Karl. How was your time in Richmond?

Karl Blau: Fabulous, though next time I want to have more time to explore built-in to my visit! I’ve met some wonderful people and again got to record with some of the most talented musicians I’ve yet to come across.

Spacebomb: What was it like making two records in two weeks? Alternating between different records and working under intense deadlines are not things that all musicians can handle.

KB: There was a lot of shifting gears. But that kept everything fresh enough. It’s kind of amazing how different these records sound, the same people making the basic band sounds on each, but such a different feel. It’s jazz meets world, East coast meets West on mine, and it’s Southern gospel and psychedelic on White’s.

We had to keep a steady pace for certain. And, again, I didn’t really get out and see the town like I’d hoped. But that’s self-employment for ya. When I landed at Spacebomb, Matt revealed this calendar which scheduled out the entire 2 week session of when Pinson was going to do percussions, when the choir would arrive at the studio, guitar overdubs, etc. That combined with the fact that we didn’t leave the studio is probably why we got to track the whole deal within the time constraints of two weeks. We were working on the records each day just after breakfast to just before we would collapse in fetal positions in our beds. And we were lovin’ it the whole way.

Spacebomb: You made your 2009 album Zebra on K Records all by yourself, and this was obviously completely different. What was that like?

KB: Zebra happened at Dub Narcotic studio in Olympia, WA. It’s the K label’s in-house studio and I’ve worked with that equipment since the 90s. Like Spacebomb and working with analog equipment in general, one is always problem solving routing through issues. That’s what I identify with. You have to be alert and responsive to keep a session’s momentum during a problem with the equipment. That can be fun at first and then turn to nerve-racking quickly enough.

Zebra with a couple exceptions was recorded alone. I set up the drums and an amp next to the tape machine to record the basics. Dub Narcotic is a standing studio, the board is up just higher than waist level. You’re always moving — it’s practically aerobic. 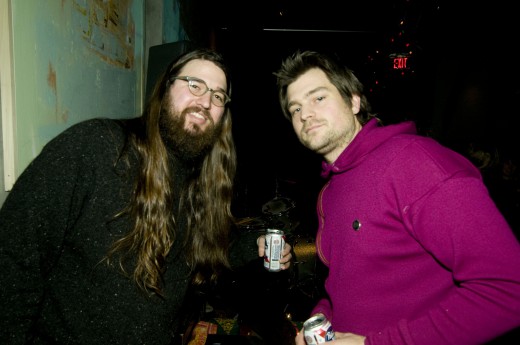 Spacebomb: How was working at Spacebomb Studios?

KB: It was fun, yet not without it’s challenges.

First we began recording White’s album – the spine: the bass and drums. A bunch of prerecorded tape was on a corner shelf of Spacebomb. Though it was quite a few reels, there were only 7 to 12 minutes of tape on each and many of them were too old or used to hold a take without a mega-hiss playback. When we started recording my songs to tape, we quickly realized that we didn’t have the length of 1/2” magnetic tape that we would need to completely track my record, so we switched to digital. So we alternated between digital and analog as well as between our albums almost daily.

Those of you who know my habits and practices may be aware that I never use digital format to record. Period. So at first for me it was a little mental shift to prepare myself for the feeling of going binary. But that was short-lived. Forward progress! Quickly we re-patched all the cables in to the Alesis digital deck, selected the bit quality and we were rollin’. The digital recorder we used really acts just like a tape machine with play, rewind, fast forward functions, etc. It was pretty intuitive for me from there out at Spacebomb, until Lance’s studio – which is strictly digital, no board even– where my brain struggled pretty good. I won’t go there now. Not to say anything about Minimum Wage, but that it’s a creative environment and Lance is a vibe master. This problem is strictly a personal issue between computer screens and me.

Spacebomb: What kind of expectations did you have going into this Spacebomb project?

KB: I expected that we would finish our records. However I didn’t realize how involved the Matt White record would be i.e. strings and horns over the ENTIRE album. Which is beautiful and ambitious to say the least. A wise Japanese man told me and my brothers when we were very young, “Boys, be ambitious!” I love these challenges.

Spacebomb: How is the musical climate here different than in Washington?

KB: Washington has a simultaneous slacker attitude coupled with a neurotic drive to be creative. We’re so on the edge or even outside of the rest of the country, it is a very low-pressure atmosphere. But that’s probably why such unique ideas come out of Washington.

Spacebomb: Have you ever thought about putting out a cookbook?

KB: Pinson [Chanselle] and I cooked a lot, it was our pastime between sessions, and it helped us to stay on budget. Man, we had some great feasts, those tamales with banana leaf husks – shucks! I have learned a lot from my wife, CalliAnne and at various times in my musical career I have had side jobs in kitchens across the country.

This past week, Calli and I began talking about making a zine geared towards men that is cooking with whole foods on the cheap. Here’s biscuit recipe that I have been spreading around since I learned it (Gourmet magazine?):

Dry ingredients, mix them separately before adding them quickly and barely to the wet: 3 teaspoons of baking powder, 2 cups of flour, 1 teaspoon salt.

Then the wet is 2/3 cup of milk, 1/3 cup of oil, quickly mix this together and then combine with dry.

Spoon them onto a greased sheet. Bake for 12 minutes or so, or until slightly golden at the edges, or until it smells ready!