Richmond’s independent grocers talk about business, opportunity, and the process of becoming an RVA movement. At 8:30 PM on a Monday night, Union Market is warm and buzzy. On the ‘store’ side of the building, a tall, lanky kid pushes a carpet sweeper across the welcome mat and watches as a herd of people make their way through the door and head toward the bar. It’s a half an hour before closing, and Union Hill’s newest corner store is still humming right along.

Richmond Food Co-op’s Michele Lord and Tim Vidra are seated along a row of tables already, soon joined by board chair Susan Hill. Union Market Chef Justin Cropper is busy behind the line, but he takes a moment to come chat with the table, which now includes Hunter Hopcroft as well as Erin Wright and Jessica Goldberg of Harvest Grocery + Supply and Little House Green Grocery, respectively. “It’s a big change…to go from executive chef to making sandwiches,” the classically-trained Johnson and Wales graduate tells us, “but it’s all about making simple, good food.”

Gillian Field, Hunter Robertson, and Shawn Tunstall, the owners of Union Market, know all about big change. None of the three business owners have experience owning a grocery or restaurant, but that didn’t stop them from combining their experience and skills to open the store less than two months ago. In fact, none of the entrepreneurs behind Richmond’s small grocery stores came to it through experience in the industry but rather through a vision of what Richmond could be.

Shawn pours a few glasses of wine, and everyone gathers around for a sweet photo op. The nine business owners fill the banquette, squishing together like kids on a schoolbus, excited by the opportunity to swap stories with their comrades. These are the few peers in the city with whom they share a very similar life-changing experience. They’ve come together to talk about business, opportunity, and the process of becoming a part of Richmond’s independent grocer movement, a movement that’s gaining momentum, as plans for new stores seem to make news with increasing regularity.

Erin and Jess were the pioneers, reviving the corner stores that had disappeared from their Northside neighborhood decades before. Erin points out, “when we first started, there was nothing.” The popularity of farmers markets and the farm-to-table movement championed by Richmond’s best chefs has created an opportunity for this type of store to thrive. Tim Vidra touches on the changing attitudes that he sees: “I think there is a shift in the way people shop in general. People aren’t shopping for a month’s worth of groceries…there’s a movement toward living in the city and shopping for what you’re going to eat that evening or maybe the next day.”

Much of the hard work and research that went into Little House has paid off for the other grocers. On this point, Hopcroft chimes in saying, “I personally owe a huge debt of gratitude to Erin and Jess…they really have blazed a trail for so many little details that seem insignificant in hindsight, but at the time, they were huge turning points in actually getting off the ground.” The Coolbot, a refrigeration unit that transforms a small space into a walk-in cooler, made its RVA debut at Little House two years ago. Now it’s the gold standard for Richmond grocers, chilling Union Market’s kegs, Harvest’s fresh produce, and likely finding a home at the co-op as well.

In another town, these entrepreneurs might see each other as rivals or at least as competition, but that’s not the case here, and that sense of community support is part of the reason why they chose Richmond as the best place to start their businesses. Another factor is Richmond’s potential. Hopcroft points out, “Richmond’s not as jaded as a big city. It’s a blank canvas…so if someone can go somewhere and pull the best elements and bring them back here, when you start something, people are excited about it…It’s nice to be in a place that will support something.”

Each of these businesses drew inspiration from stores around the country–from Cookbook in LA to George Bowers Grocery in Staunton. Gillian credits Tina at Shields Market for spending over an hour with her on the phone, answering questions about everything from merchandise to hours of operation. Despite the obvious similarities (championing local products, small business ownership, and neighborhood pride,) each store has a unique vision that defines and distinguishes it.

For the Richmond Food Co-op, that vision is of an owner/member-directed store that serves as a gathering place for people interested in healthy, sustainable living. Michele’s experience with the Park Slope Food Co-op in Brooklyn prepared her to bring the idea back to Richmond: “I believed Richmond was ready for a co-op.” Because there is no physical store yet, Susan Hill says the co-op team takes advantage of events around the city to create its own community. The co-op’s well-attended events, which are aimed at recruiting new members and educating people about the benefits of taking ownership of their own store, range from info sessions at places like Hardywood and The Continental to the newly rescheduled “Love Your Co-Op” fundraiser at Gallery 5.1

Jess characterizes Little House as being all about food access. In-store classes, tastings, and their 100-mile radius potlucks have made the store a hub for food-lovers in the Northside. “We wanted it to be clean; we wanted it to be fresh; we wanted it to be inviting and approachable and all about access to great local food, fresh food…We didn’t want to rely on a whole aisle of essential oils and vitamins…we wanna be about food.” When it comes to the process of choosing exactly what food to include in their Bellevue storefront, Erin and Jess rely on customer feedback and admit to taking some chances, based on their own instincts. Jess explains, “We kinda play it fast and loose, like ‘yeah, horseradish, alright, we know we really should have that!’ There’s a season for everything. Like panko bread crumbs–now is the time for panko, not in the summer.” Erin adds, “You have to know people, and you have to know what’s being cooked at certain times.” 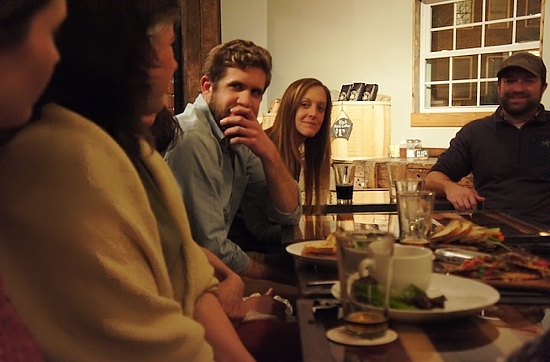 For Harvest, the home cook is king: “I wanted to create a cook’s store, a store for people that like to cook,” says Hopcroft. He laughs and adds, “Erin and Jess told me that nobody cooks, but–” Erin pipes up to offer her defense: “We were at a different place back then!” Hopcroft’s factoring process for whether or not an item belongs in his store is simple that way: “Can you come in the store and grab the things to make a great home-cooked meal?” In addition, Hopcroft strives to provide the best product in every category, “My goal is to show people things that they probably haven’t seen before, and the people that have seen it before are going to be very excited that I have it.”

Union Market’s model is more of a corner bodega that aims to meet the needs of the neighborhood by being convenient and well-stocked with everyday items at price points that accommodate multiple income levels. Mid-way through our interview, Chef Justin brings out a Ploughman’s Plate and a Panini-Pizza, which everyone is afraid to get stuck in their teeth but promptly devours as soon as the interview is over. The casual, reasonably-priced menu is another important aspect to the store that fills another neighborhood need. The store’s owners, all of whom, Robertson points out, live within a mile of the store, were influenced by trips to Charleston, SC and their own ideas of what a corner store should carry. Gillian expands on this, saying, “We wanted to take a stab at it first…but we’ve been very open with people, asking them to let us know if there’s something they see that they want. If we’re going to sell enough that we can afford to buy it and find space for it, then [we’ll carry it.]”

These are stores for grocery shoppers, explains Hopcroft: “People come into our stores and take thirty minutes, read every label and truly shop for groceries.” They’re inspired by what’s fresh and seasonal and aren’t “coming in with a list and just trying to get in and out.” This is the type of consumer these grocers love to see, an inquisitive consumer with pride for the city and a taste for locally-sourced products, one that they all agree Richmond is full of.