Farmers markets have become incubators for successful artisanal food-related businesses. The next generation of pre-famous vendors is creative, cheerful, and ready to be wildly successful. Richmond is rich with farmers markets, supporting about a half dozen or more at a time, from the Saturday stalwart South of the James to the St. Stephen’s outdoor-in-the-summer/indoor-in-the-winter market to Tuesday’s locavore magnet Byrd House Market. It seems that, with each new season, there are a handful of new vendors, dipping their toes in the pool of commerce before taking the plunge into the deep end.

The markets can boast plenty of startup success stories–businesses who built a following at the market only to expand their empire to retail shops, restaurants, and wholesale accounts in major fine foods and grocery stores. Folks like Bombolini Pasta, Boka Tako, Goatocado, Pizza Tonight, Reginald’s Peanut Butter, Blanchard’s, and Alchemy Coffee all did just that.

The new class is ready for a piece of that action. They’ve brought their A-games to the markets, filling cravings we never knew we had for cold-press juice, dumplings, small-batch baked goods, oyster mushrooms, and pimento cheese.

DAL-KOHM (South of the James)

Hannah Lee is a CIA-trained pastry chef who worked under celebrity chefs and food stylists in New York before heading south to Richmond, then to DC, and back Richmond to eventually launch Dal-Kohm (Korean for ‘sweet,’) eight months ago.

Sea salt caramels, biscotti, and sticky buns dot the well-appointed market table, decked out with wire baskets and a turquoise cake stand, behind which you’ll find Lee and one or two of her friends, cheerily handing out samples of sweet corn cookies or blueberry buckle.

Lee is the owner/operator and sole employee of the small-batch bakery. She created its identity, from the logo to the website to every last recipe. For her, the market is the best place to reach the widest audience. Lee shares a seasonal menu on her website so customers know what they can expect to find.

Lee’s breakfast breads, buckles, and biscuits are flaky and buttery, subtly sweetened and perfect with coffee. Her macaron flavors are inspired–cassis, matcha green tea, and, my favorite, a London Fog flavor that combines white chocolate ganache, Earl Grey tea, and vanilla. They disappear like late morning fog in my presence.

“While it has been a bit tough selling alongside some of the farmers market veterans, the few that do come visit my booth have been amazingly supportive and kind with their feedback,” says Lee, adding, “I think what surprised me the most were some of the people I have encountered. Perhaps my time in New York or DC has jaded me, but I am blown away by how nice some customers have been as well as the vendors at market.”

For a town that so enthusiastically champions pimento cheese, it had always struck me as odd that it was, for the most part, missing from the farmers market. So ubiquitous in Southern culture, how could there not be someone wheeling and dealing the stuff every Saturday? Maybe it’s too personal, something you make, not something you buy. And yet, no, that can’t be right either because I know I will buy pimento cheese whenever the opportunity presents itself. In fact, I was once so notoriously addicted to the now discontinued Black Diamond Pimento Cheese at Kroger that I actually lost noticeable weight when they stopped carrying it. HILARIOUS! (sobbing.)

So, there was a gap. And Birdie’s Pimento Cheese fills it at the Farmers Market at St. Stephen’s, where Robin Allen, aka “Birdie,” accompanied by either her husband or her sister, set up twice monthly to sell their five varieties of the beloved cheese spread. Allen says her “pimmenah cheese” is unique because it uses less mayonnaise than others. There’s also an ever-so-slight sweetness in her signature “Carolina Caviar” variety that makes it all Birdie. The Jalapeno variation makes me sweat right under my eyes, a place I previously didn’t know could sweat. That’s learning through eating, which, of course, I enjoy.

“We started as a whim honestly, a hobby,” says Allen. “The farmers market is a wonderful test ground. It’s pure selling, producer to consumer. If they like it they tell you, if they don’t they tell you…to your face!” Allen says she appreciates the opportunity to learn from her fans and critics and to adapt based on customer feedback.

“Being at the markets has been amazing so far,” says Ninja Kombucha owner Brett Nobile. Nobile started Ninja Kombucha in March, Nobile says, after he “quit drinking beer and started drinking a lot of kombucha.” The company’s early success has even Nobile surprised, he adds: “It has really exceeded our expectations in a lot of ways, and we’re doing our best to keep up.”

“The markets are the place to find the best food available in Richmond, period.” — Brett Nobile

Ninja Kombucha is already selling at two markets in their first season, and Nobile says, “I feel like being a vendor has just immersed us in the local food scene and we have been able to source some of our ingredients from local farms like Amy’s Organic Garden and Agriberry Farms. The markets are the place to find the best food available in Richmond, period. I’m eating better than I ever have. I love Norwood Cottage breads, Amy’s produce, dairy from Faith Family Farms, Sub Rosa bakery, and Steve Haas mushrooms.”

When I met Ginger Juice owner Erin Powell this past winter, I immediately connected with her story. The single mom started making cold-press juice for her favorite three-year-old picky eater, Sayer (whose radiant red hair was the inspiration behind the business name). It was the only way she could get a blessed vitamin in the boy! Once she started juicing, she saw the benefits for her son and herself. She studied up and took the steps to launch a business, all the while holding down an impressive gig at Snagajob. Ginger Juice soon became a personal addiction of mine and my own three-foot boss and, not long after that, a client of my business.

Erin and her team set up at two markets each week, and be advised: they tend to sell out of popular flavors, like Glitzy, which combines apple, pear, and pineapple, and Glamberry, a mix of strawberry, carrot, green apple, romaine, and lemon. Convinced your child will never, not ever, consume a beet? Put a twisty straw in a bottle of Glamorous–a blend of beets, orange, and grapefruit–and watch what happens. 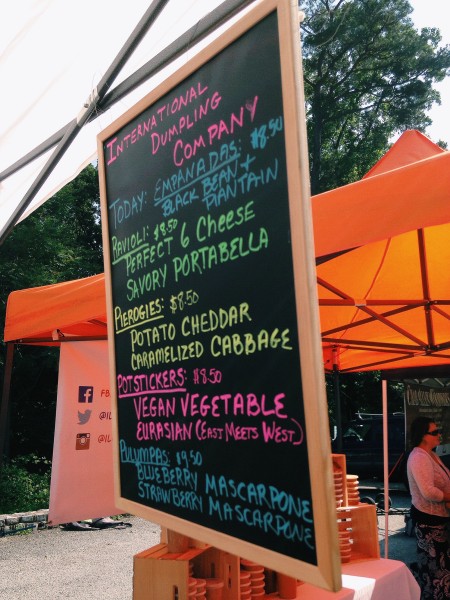 Susan and Don Goetz love dogs. When I approach Don to reserve my usual dozen potato and cheddar pierogi on Saturday, he’s wearing a shirt with a shirt-sized picture of a Labrador on it. That’s what the Goetz’s have at home (one of four rescue dogs), and Don says he loves to see so many four-legged friends at the market each week.

International Dumpling Co embraces an equal opportunity approach to dumplings. Every culture has a dumpling, and the Goetz’s love them all–pierogies, ravioli, potstickers, and empanadas alike. Nothing anchors dinner like a good dumpling.

You talk to them for five minutes, buy a pound of oyster mushrooms, and suddenly you feel like twirling in the parking lot singing “THE HILLS ARE ALIVE…WITH THE SOUND OF MUSHROOMS.”

The pierogies are well-constructed and hold up to freezing, thawing, and boiling admirably. You’ll find both a potato and cheddar as well as seasonal varieties like an earthy, sustaining caramelized cabbage. Potstickers, available in vegetable and Eurasian (cabbage and mushroom) have delicate skins that crisp perfectly with proper technique; and if ‘proper technique’ sounds scary to you, you can steam them. That’s pretty fool-proof and similarly delicious.

Don says that selling at the market doesn’t afford him the kind of time for actually shopping at the market that he’d like, but he’s happy to be selling to customers who get where he and Susan are coming from: “The crowds that attend care about quality products made with locally grown, seasonally fresh vegetables and fruits,” says Goetz. “These are the same things we try to show are important through the food we create!”

Jake Greenbaum and Lindsay Hawk are in love. They’re in love with life and mushrooms, and they’re in love with each other; and it’s positively radiant and infectious. You talk to them for five minutes, buy a pound of oyster mushrooms, and suddenly you feel like twirling in the parking lot singing “THE HILLS ARE ALIVE…WITH THE SOUND OF MUSHROOMS.” But you don’t. At least, not this time.

Since their debut at the winter market, the duo has been consistently growing mushrooms in their Scott’s Addition grow space, which they share with Rudy’s; supplying the market and area restaurants; and winning awards, like the 2015 Venture Creation Competition and the ACG Business Plan Competition, which netted the business over $5000. Their passion is infectious, and their mushrooms are gorgeous. It’s no wonder they often sell out, so it’s best to make them an early stop in your market rounds. 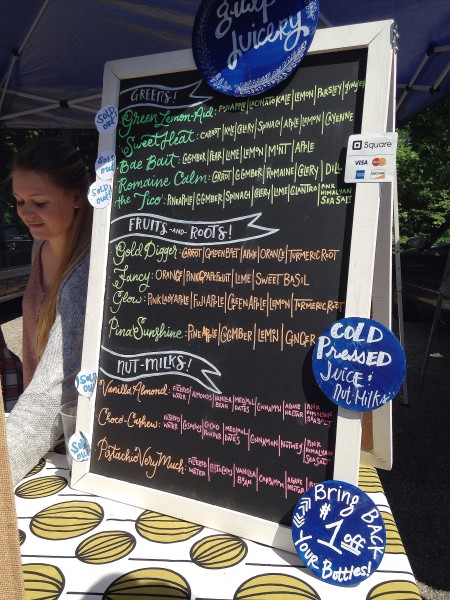 Two cold-press juicers? YES. Here’s why: It’s special. It’s worth it. TRY ALL THE JUICES. Gulp is owned and operated by Rachel Holmes, who goes to painstaking lengths to create nutrient-dense raw, vegan, and organic cold-press juices. Holmes categorizes her juices in three groups–First are the Greens, including Bae Bait, an easy-drinking mix of cucumber, pear, lime, lemon, mint, and apple. Then there are the Fruits & Roots, like the Golddigger, which combines carrot, golden beet, apple, orange, and turmeric root and may actually turn you vaguely orange if you drink too much of it, but think how healthy you’ll be! And last are the Nut-Milks, vanilla almond and choco-cashew so far, with promises of a pistachio variety on the way.

Holmes attributes the growing popularity of cold-press juice to its unmatched health benefits: “Technically [cold-press juicing] is a two-step titrating or masticating process (depending on the juicer) that slowly extracts or presses juice from whole produce. This process is set apart, as it retains more nutrients, minerals and prevents oxidation within the juice as opposed to centrifugal juice.” She adds, “I think the Richmond community was ready for a portable bottle juice option and, given the diverse population and dietary proclivities of Richmonders, the juices and nut milks appeal to Richmond’s inner foodie, while still being raw, vegan, vegetarian, gluten-free and healthy!”