Richmond Proper: On agreeing to disagree

“By keeping your cool, you’re teaching by example, much as a parent does for a child. Good behavior is catching; the more you display it, the more it spreads. This doesn’t mean becoming a doormat; it does mean you can defuse a situation without wrangling over who’s right or wrong.”

“By keeping your cool, you’re teaching by example, much as a parent does for a child. Good behavior is catching; the more you display it, the more it spreads. This doesn’t mean becoming a doormat; it does mean you can defuse a situation without wrangling over who’s right or wrong.”
— Peggy Post

“Whoever one is, and wherever one is, one is always in the wrong if one is rude.”
— Maurice Baring

Nothing thwarts the flow of human tolerance like disagreements. Often, disagreeing with someone on just one issue can be seen as justification for attacking that person.

We’ve all seen this kind of behavior in a variety of different venues. During a political debate, one politician rolls his eyes and shakes his head the whole time the other politician is talking. Instead of actually listening to his opponent and coming up with an intelligent response, he has turned his ears off completely and has a boilerplate response ready to regurgitate. In the meantime, his actions disrespect and belittle his opponent. When our leaders act ungentlemanly toward each other in front of the television cameras, it’s no wonder we think it’s okay to do the same.

But this isn’t just a problem on the national stage; it’s close to home as well. At a party, two women begin a heated argument about the “right” way to birth babies. In a college course on religions of the world, one student scoffs and calls another student names for defending his beliefs. On Facebook, a friend shares an opinion in a Wall post. Other friends comment on the post, saying things like “Ugh, we are not friends anymore. I had no idea you were like THAT,” or “You are so ignorant. Here’s why you’re wrong…” Upon learning that a friend has different tastes and opinions from themselves, these small-time dictators immediately move that friend from the “friend” category to the “enemy” category. You know, since you can’t respect someone who likes different things than you like, or believes differently from how you believe.

No matter how different we sometimes feel from each other, we have more in common than not. When we focus on our common interests and characteristics, the disagreements don’t seem as important. Let’s replace our aggressive, my-way-or-the-highway reactions to those disagreements with a new way of thinking. It’s very simple, but since it seems to be such a hard concept to put into practice, I’ve even made a hilarious but helpful flow chart to make it easier! 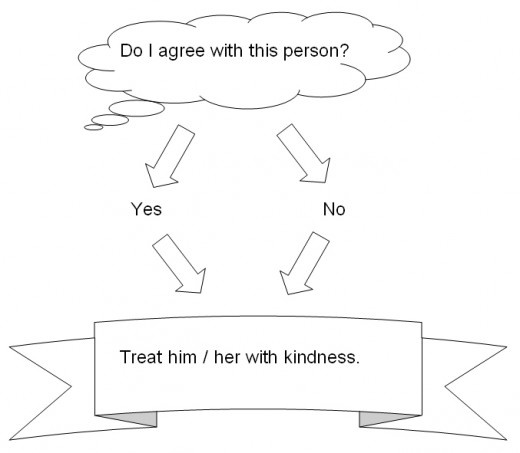 So whether we’re attacked in public, in a letter, on Facebook, or via whispering and gossip, the correct way to act is in kindness. Respond to an angry letter with “I’m sorry you feel that way, but I do hope you’re doing well otherwise.” Remove bombastic, argumentative hotheads from the list of people you share with via social networking. Ignore judgmental gossips and refuse to gossip yourself. As far as confrontations go, two of our favorite sources agree:

“If it happens in public, the answer is merely to walk on, and if it happens under social conditions, it is to refuse to discuss it.”
— Miss Manners

“If discussion can occur in a friendly and caring way, great. If it can’t, then the answer is, ‘Let’s just agree to disagree on this one and not talk about it any more.'”
— Emilypost.com

You can’t always “win” a fight, but you control how you acted in that situation, and refuse to be a part of further rudeness. Think about the times that someone has changed your mind. Were most of those times yelling matches, or quiet conversations between good friends? “Far from squelching substantive discussion and debate, etiquette is what makes them possible,” Miss Manners writes. “Without such rules, there are no exchanges of ideas, only exchanges of set positions and insults.”

Readers, people do and should disagree. How you deal with each new disagreement is your choice. Are you a caveman who goes about cracking skulls, ruled by his gut reactions and unable to think beyond the mantra of “eat or be eaten?” Or are you an intelligent, modern human being who’s able to forgo the short-term pain of holding his tongue in exchange for the long-term benefits of peace and free will? Your choice will speak for itself through the drama or the calmness that you bring into each room you enter.

Suggested reading: “How to Disagree Agreeably” from realsimple.com.

Have an etiquette question and need some advice? Email tess@rvanews.com.