UPDATE: Richmond cookbook 804ork is back for seconds with Vol. 2

One part recipe collection, one part #rvadine yearbook, the well-received 804ork is “Back for Seconds,” with a follow-up volume of Richmond restaurants, chefs, and recipes. It’s available RIGHT NOW! STOP THE DIGITAL PRESSES! 804ork 2 is now available for immediate purchase in our shop! Like, you could stop by (or order online and pick it up THIS VERY DAY!) No foolin’!

It started with an unlikely pitch. Carrie Fleck Walters wasn’t expecting to stumble upon her next project when she scheduled a meeting with her attorney, Chris Gatewood. She was planning on asking him his advice in finding a way to structure her product line–which would eventually be named Blunt Objects, in order to continue making and selling projects like the Richmond Type Map and Hood Map. She’d thought she might take pitches from other local artists and designers to help them produce their own creative projects. But then Gatewood asked Walters, “Can anybody pitch an idea to you? Because I’ve got one.” And there it was, the next idea.

He had been dreaming of a cookbook that would feature Richmond restaurants, chefs, and recipes; but he didn’t have the team to put it together. “It was a 30-second pitch, and then ‘Ok, absolutely! How do we do it?!'” remembers Walters. It would be the first time anyone on the team had attempted to self-publish a book, and there were many lessons learned along the way.

Interviewing and getting recipes from chefs, photographing dishes, writing copy, and designing the book took the better part of a year and the efforts of several contributors (Walters herself handles the design). Then there were the several months it took to print, and weeks on top of that to ship, but when the tractor trailer of cookbooks finally showed up on Waters’s doorstep, she was certain they had a truckload of something special: “We knew we had a good idea, and we were really excited about it. The restaurants were really excited about it. Having that enthusiasm helped keep the pace going.”

The response was overwhelmingly positive, and 804ork eventually went through another printing. A few copies of the first volume can still be found at bookstores and restaurants, but, Walters says, “I think all along I thought that 804ork could be bigger than one book, but it wasn’t until I saw the response to it that I knew we really had something.” After she’d had a chance to catch her breath, Walters realized it was time to put a new 804ork out there.

Guess what, there’s a sequel

Vol. 2: Back for Seconds opens with a foreword by former Saveur editor Laura Sant and features over 50 new recipes with 21 Richmond restaurants. Rather than the more typical organizational structure from the original, which goes by course, these recipes are categorized according to what Walters calls genres: “The Specialists,” “New American,” “Neighborhood Eats,” “Tastes from Abroad,” and “Out of the Ordinary.”

Walters brought on Marcella Lee and Kim Catley for the second volume, and together, they decided to make a few tweaks to the original formula. “The writing team and I decided to reorganize it so that the story’s there with the recipe. We put in the Q&A with the chefs because 90% of the time they’re hilarious and show the personality of the chefs, which I love,” explains Walters. “And then we go into the recipe. We’re talking about their background, their recipes, the restaurant’s history, and why they do what they do. It’s a clean read.”

The usability of the recipes themselves was a primary concern. “I knew I wanted to do a better job with the recipes in this book,” says Walters. “We edited them. We tested them all. They’re much cleaner, much tighter, much more user-friendly.” Walters notes that, while some of the recipes are time-intensive and necessitate a trip to New Grand Mart, there are others, like Deco Ristorante’s Pasta Trinacria and Metzger Bar & Butchery’s Beer-Brined Pork Chops, that “are good home-cookin’ meals that are a few ingredients and not complicated, but that have cool little twists to them.”

Each recipe has been tested and retested to cookable perfection, thanks to Food Editor and Photographer Marcella Lee, who went into the kitchen with nine of the chefs in the book to get step-by-step instructionals for recipes like the Savory Grain’s Rabbit Pot Pie and L’Opossum’s Hot Black Bottom Á La Mode, giving a behind-the-scenes perspective to some of the more labor-intensive dishes. 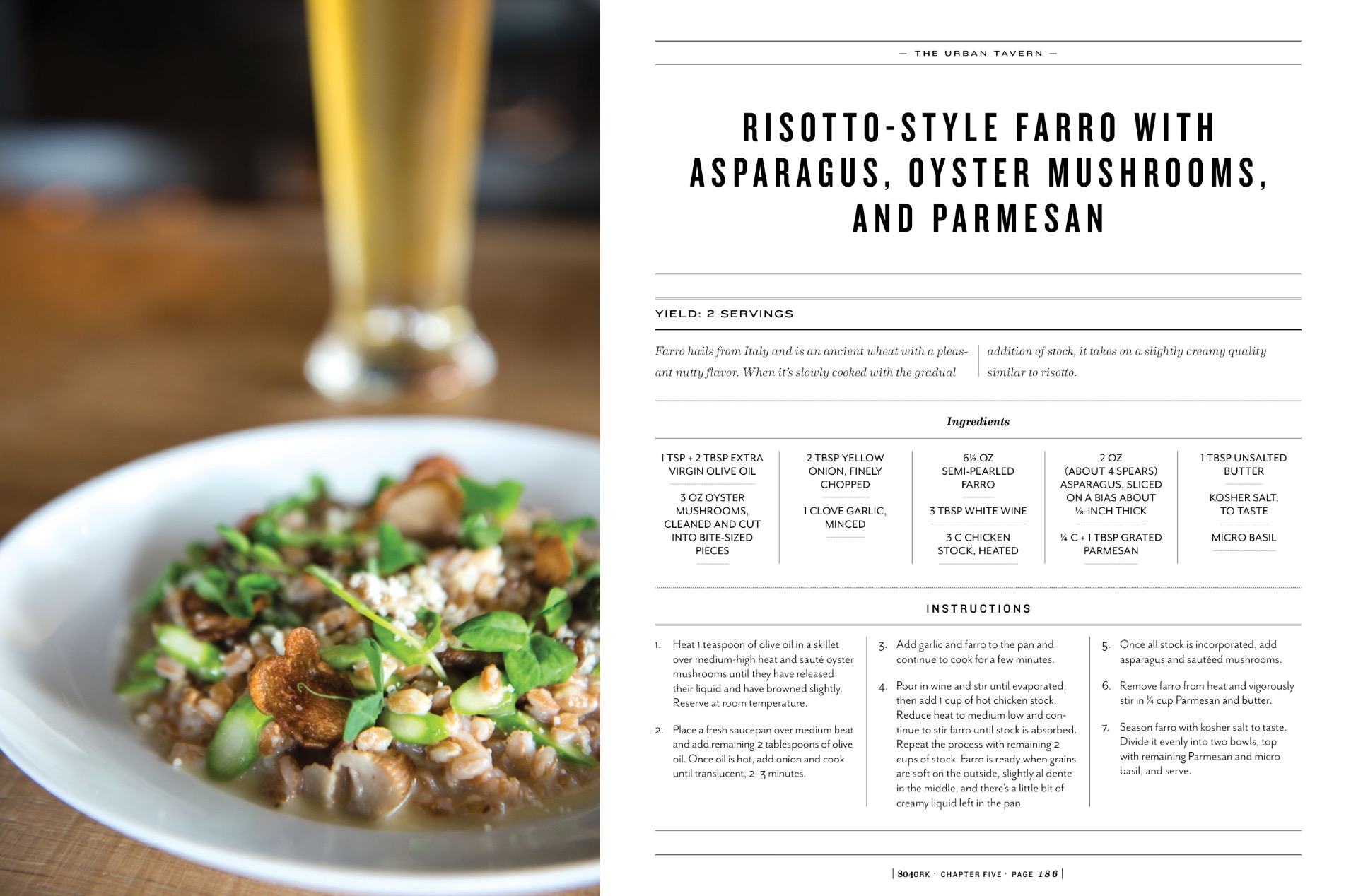 Risotto-Style Farro with Asparagus, Oyster Mushrooms, and Parmesan from Tim Bereika at the Urban Tavern.

“Seeing the technique is different than reading the recipe,” says Lee. “Chefs aren’t recipe writers,” she explains. “Some submissions came in as bulk recipes for 50 people or more. Some had attempted to be cut into a smaller portion, but because they don’t have the time to test that cut down recipe, it was really important to go back and test them.”

Tim Bereika is one of the chefs who has recipes in both volumes, Secco in the first and the Urban Tavern in the second. In both cases, Bereika says, he considered his audience foremost when determining which recipes to submit: “I wanted to make it user-friendly in a way that a home cook can read it and understand it and not feel like they were going to spend the whole day making a meal. I wanted to make it straightforward and interesting, not something like a how to brine and smoke a pig head at home.”

Marcella Lee’s tip for using 804ork Vol. 2: Back for Seconds successfully as a home cook is a simple one: “Read the recipe all the way through first, before you even buy your ingredients.” She explains, “There might be a nuance in the type of ingredient or maybe there are sub-recipes. You’d want to plan ahead and possibly do the sub-recipes in advance.” Those sub-recipes, the components that come together to help a dish find harmony–vinaigrettes and garnishes–are some of the best recipes in the book. These are the pages to dog-ear and eventually memorize. The Continental Westhampton’s steak sauce and Shoryuken Ramen’s pickled mushrooms are strong examples.

There’s something happening in the Richmond food scene right now that’s fun to watch. It’s something like a personality coming together, a style being established, refined, and finally noticed. Carrie Fleck Walters calls it “confidence,” and it’s what she saw emerging in the stories and recipes in Vol. 2. Just as the original 804ork did in 2014, Back for Seconds provides a snapshot of what’s going on in Richmond dining right now.

For Walters, the chefs’ statement in this particular volume is this: “We are culinary leaders, and we’re showing our stuff. Here are our recipes. We have nothing to hide.”

804ork Vol. 2: Back for Seconds is available now in our shop! Get gifting!