He avoids organic when discussing food because the word often gets lost in translation.

“Organic is very trendy and has taken on a life of its own, so much so that farmers and producers have to go through very rigorous screening and certification processes to become organic certified,” said Lewis, who runs Renew Richmond, a nonprofit that empowers people to cultivate healthier lifestyles through the production of food.

“That is great,” Lewis continued about the organic food movement, “because it’s served a particular market of health food and conscious individuals…and that is great in spreading the message of giving back to the earth, eliminating the use of pesticides and herbicides” and GMOs.

But whereas the affluent merrily flock to organic products, people in low-income communities often have no grasp of, and no experience with, organic food. It means nothing to them.

“For the population that is suffering the most in malnutrition and over-exposed to salt, sodium, sugars, high fructose corn syrup, dyes, or other ingredients in processed foods, talking about organic might as well be speaking another language,” Lewis said.

Luckily, Lewis is bilingual in the languages of food.

John Lewis spent roughly half of his childhood living with his mother in Northwest Roanoke next to a housing project. “It had all the effects of a low-income community: poverty, drugs, and violence,” Lewis said. “A food desert, a concrete jungle as Roanoke goes.”

The other half of Lewis’ childhood was spent with his father, who ran a camp and conference center about 50 miles southwest in the mountains of Floyd County. “I was always able to escape if I needed to, to really enrich my life through open spaces and wilderness,” Lewis said. “I wanted that for the community and the youth that I worked with when I moved to Richmond.” 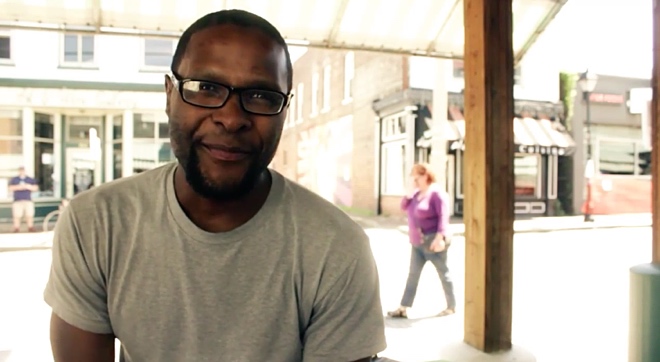 Lewis, a practitioner of Chinese martial arts and Kung Fu for 13 years, moved to Richmond in 2002 to study at VCU. Before long, he began working in the Richmond Public Schools system as a reading coach, science teacher, math instructor, prevention specialist of substance abuse, as well as an outdoor and sports education facilitator.

“My big push was just to get kids outside,” Lewis said. “I always wanted kids to experience the wonder and the openness of the natural environment so they can turn into kids again. By virtue of being outside, they’ll be able to absorb more information and all the restrictions and claustrophobia of the classroom would disappear, and they’d actually be able to learn.”

While working out of GH Reid Elementary, Lewis meet Jared Karnes and Laurie Lay, who together created Renew Richmond. Karnes and Lay had helped the school grow food in the school’s 2,000-square-foot hoophouse. Renew Richmond’s focus on food and urban agriculture called to Lewis, who then joined the duo.

Lewis gave Renew Richmond a fresh coat of topsoil. “The events that I put on focused on food and health through food,” Lewis said. “Without access to healthy and nutritious food, we see many disparities–especially in low-income communities and African American communities–having to do with health and mental behavior, anywhere from obesity to high blood pressure, asthma, diabetes, and then mental and behavioral health issues: ADHD, oppositional defiance disorder, low self-esteem, low self-efficacy.”

Lewis found that when you put children in a garden “they take on the great responsibility of taking care of something and seeing it grow, and then they end up seeing themselves grow through that therapeutic work that they do in the garden,” he said. Not only are kids invigorated through horticultural therapy, ” they get cherry tomatoes and squash and peppers out of the deal.”

Consisting of a trio in 2009, Renew Richmond expanded GH Reid‘s garden, fully refurbished the hoophouse, amended the soil, made an outdoor classroom adjacent to the school’s horticulture site, helped create the student-run famers market, and more. “We put on educational programs related to nutrition and obesity prevention, as well as the basics in gardening and urban agriculture,” Lewis said. Renew Richmond stewarded the site and taught community members how to grow food, not only in the school garden, but in any community and backyard garden.

Reconnecting people with their food showed Lewis that community and individual-based urban farming could help ameliorate poverty and joblessness. “Individuals that have a deep economic and social connection to their food system tend to be in empowered to take charge of their lives and their economy through the sale and distribution of their food,” he said. “These are all strong virtues that we find are developed in individuals involved in something positive.”

You reap what you sow

In 2012, after both Karnes and Lay left the program, Lewis served as Renew Richmond’s sole director, farmer, marketer, as well as program director and facilitator.

That year, Renew Richmond partnered with the Jerusalem Connection in Southside to break ground on a new community garden comprised of two green houses, 31 raised beds, and a rain garden on 2.5 acres of land. This year, the garden yielded roughly 4,000 lbs. Next year will be more ambitious. “We’re looking to grow about 10,000 lbs. of produce on that site,” Lewis said.

Half of the yield from Jerusalem Connection is sold at the GH Reid student-run farmers market, as well as vendors like Ellwood Thompson’s and local restaurants. The other half goes to community food pantries.

The success at GH Reid and Jerusalem Connection lead to Capital One gifting $2,000 to Renew Richmond to help build gardens at George Wythe High. Students steward the garden and teachers use it as an outdoor lab for after-school projects.1

Renew Richmond then worked with Swansboro Baptist Church on the Southside to build 20 raised beds, with yields going to Swansboro’s food pantry. Renew Richmond and teachers at nearby George Wythe High will also use the garden to teach students about community advocacy and sustainable growing practices.

With four sites to its credit, Renew Richmond still hopes to grow further. But not like kudzu. “We want to hone in our skills and abilities to address particular issues,” Lewis said.

“We’re looking to expand and contract and hone in.”

As expansion goes, Renew Richmond is working on a new two-acre site in Midlothian called the Byrd’s Nest. With raised beds and hoophouses, it’ll serve as both a demonstration and production farm.

On the site is an existing, empty home. Lewis said Renew Richmond will turn the residence into an indoor farm and educational space with small-scale growing and kitchen for cleaning and canning produce.

But Renew Richmond will also contract their urban farming initiatives. “We’re going to focus in on growing healthy and nutritious food for communities as a way to reduce health disparities in low-income communities, especially in African-American and Hispanic communities,” Lewis said. “But we’re also honing in on job training and development.”

Lewis said Renew Richmond’s programs directly employs people from the communities its gardens grow in, people who Renew Richmond, in turn, want to make more employable. “We’re trying to train them in the areas of conservation, urban agriculture, and environmental stewardship,” Lewis said, giving people skill experience with the sciences, construction, math, customer service, etc. “We’re getting them prepared for the actual workforce.”

Most, if not all, people Renew Richmond engages are in low-income families. “African-Americans for the most part disproportionally represent low-income communities and communities [in general] that suffer from diabetes, heart disease, high blood pressure” etc.,” Lewis said.

And it’s with them when Lewis avoids the O-word.

“It is very dangerous if you use [organic] in the context of feeding the world or talking about feeding low-income communities, because organic prices are very exclusive to the affluent and well-off,” he said. “We use things like fresh, nutritious, healthy. And if you can’t grow your own, buy fresh from a local farmers market, or your grocer,2 or be involved with a community-supported agriculture model.”

By cultivating healthier eating and lifestyles through food growing, Lewis wants to “instill values and educate the communities for a long time.”

Lewis wants more African-Americans and minorities getting their hands dirty in urban agriculture because it’s an “innovative and revolutionary idea to grow within a space that seems impossible or too small to grow in,” he said. “That’s where the focus is going to be in the sciences and agriculture in the future.”

He goes so far to say the “growth of a society depends, now, on us getting back to the very basic practice that feeds us all: gardening and farming.”