Raising Richmond: VT and me

How my kid helped me stop hating–and start loving–Hokie football. (And this has nothing to do with UVA, so don’t even.) I once fell asleep during a football game.

Not while I was watching it on TV, all snuggly on my couch or something.

I was in the stadium—Lane Stadium, to be exact—sitting with my husband as we (well, he and the many thousands of other people who were also there) watched his beloved Virginia Tech Hokies play UNC. As I snored softly in the seat next to him.

Not my proudest moment, but one he likes to share any chance he gets.

I’d like to say that the two Cape Cods I pounded before we headed into the game were the sole cause off my nodding off—but the source of my sleepiness was rooted in more complicated stuff than that.

The Stadium Snooze took place in our second or third year of marriage—a time when I was still easing out of a long-standing, deep-seated resentment for Hokie football.

My husband and I dated long distance all throughout college; I stayed in town and attended University of Richmond while he moved to Blacksburg to go to Virginia Tech. We saw each other once or twice a month during the school year, usually alternating who would make the three-and-a-half hour drive separating us.

That is, unless there was a football game.

Each fall, for almost four years, the Hokies’ schedule dictated if, when, and where we would see each other. If they were playing at home, I either had to go visit him (if he managed to somehow get me a ticket to the game) or wait another week or two until he could make it up to Richmond. Come springtime, he was more than willing to make more than his fair share of treks up and down 81 and 64, but during football season? Dude would not budge.

No amount of logic-based communication, sweet-talking, passive-aggressive away messages,1 blatant threats, or pathetic crying (usually over the phone, sitting in the hallway outside of my dorm room) could persuade him. Eventually (probably by the end of our junior year), I came to accept it…and started to sort of understand it.

He loved me very much…but he also really loved the Hokies. He knew that even though he could be a Virginia Tech fan his entire life, the pride of sitting in that stadium as an alumni would never equal the magic of standing in it as a student. He wanted to soak it up as much as he could before it was over.

By the start of the Hokies’ 2003-2004 season, we were graduated, newly married, and actually living in the same city. My husband’s love for Virginia Tech still ran deep, but, like all graduates, he typically showed his devotion via screams at the TV rather than screams in the stands. I no longer looked at football as a wedge separating us for weeks on end; it was more of a thing that I had to sort of acknowledge on some Thursdays and most Saturdays from September to December of each year. On the off chance that we got to head to Blacksburg, I always loved tailgating (booze and chips flowing like wine!) and typically enjoyed the games. Or, you know, fell asleep during them.

I didn’t dislike football; I just didn’t care about it. I’d show up if my husband really wanted me to, wear my orange and maroon, and play along, but I wasn’t invested—and I definitely didn’t get what all the fuss was about.

A couple years after my notorious nodding off in Lane Stadium, my husband and I found out we were expecting a baby. As you can imagine, once people heard our good news the teeny tiny Hokie gear started pouring in: books, onesies, footy pajamas, blankets, stocking caps, booties, you name it. Our son, JR, was wearing a VT beanie in the nursery within an hour of his birth. He came home from the hospital in a hand-knit-by-Mamaw maroon and orange sleep sack with matching hat, for Pete’s sake

The indoctrination had begun. And I started to not mind.

Ok, fine. I started to really, really enjoy it.

It wasn’t just about the clothes.2 As I watched my husband introduce the world of Hokie football to our little boy—when I saw how seriously he took it, even when JR was just a big blob of unresponsive baby—I began to realize that he wasn’t just teaching him about a team he really liked. My husband was bringing our child into the fold of something he holds sacred. Something that helps make up his history and is one of the few places in his life where he feels completely free to experience and express pure, raw emotions—joy, rage, crushing grief, elation, pride. This wasn’t just a football team. These were the Hokies. His Hokies. He wanted to share them with our son.

Now that JR is almost four, he’s an active participant in the Hokie love that flows through our house.

I don’t go to—or even necessarily watch—every game. To be honest, I still spend about 45 percent3 of each game not totally sure of what’s going on. But I gladly do my part in making Hokie football part of who we are as a family.

I’m more surprised by this than anyone.

I’m surprised at the pride I feel when JR can pick Coach Beamer out of a crowd.

I’m surprised how diligent I am at making sure my son’s VT jersey is washed and ready for each game, even if he’s just watching in our basement with his dad, our friends, and me.

I’m surprised that I spent more time than would ever be necessary picking out just the right tailgating snacks for JR in preparation for a father-son trip down to Blacksburg to watch the Hokies play Austin Peay earlier this month–their first “real” Virginia Tech football game together.4

I’m surprised that I’m the one that taught our son the Hokey Pokey, the Old Hokie cheer, and that it’s not purple, it’s maroon.

I’m surprised that I’m starting to love it so damn much.

But I do. I get it. And I cherish the time my boys and I spend together taking part in the tradition that is Virginia Tech football.

So I can say this now and really, really mean it: 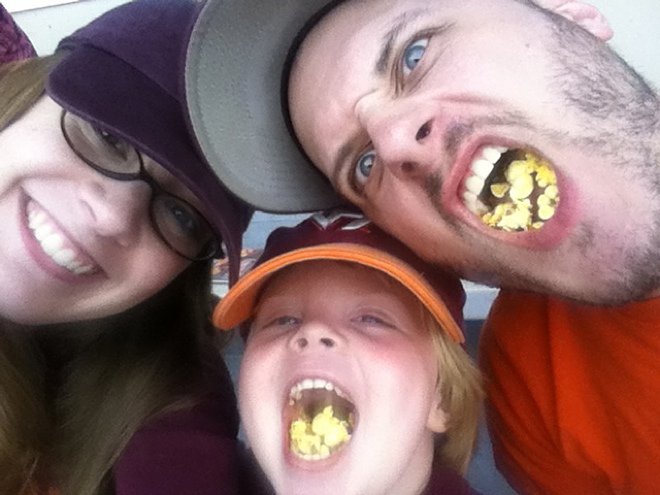