About once a week, my son thinks I’m trying to kill him. Well, I’m not sure if that’s what he actually thinks, but judging by the thrashing, shrieking, and multiple escape attempts, it’s my best guess. I really don’t mind most of the grunt work that comes with parenting. It works out well because as our son JR’s primary caregiver—and as the partner of someone who works a gazillion hours overseeing some website—most tasks involving child maintenance fall on me.

Sorting, washing, and folding a preschooler’s comically small socks and underwear are actually quite enjoyable tasks in my book. As a dental hygiene enthusiast,1 I relish the opportunity to brush someone else’s teeth two or three times a day.2 I’ve even come to accept that I will be responsible for the cleanliness of a butt that isn’t mine for at least another year.3

But there’s one task that I dread with pretty much everything I am. I only dread it because JR dreads it, too. Although “dreads” doesn’t even really begin to describe how he feels about it.

Basically, about once a week, my son thinks I’m trying to kill him.

Well, I’m not sure if that’s what he actually thinks, but judging by the thrashing, shrieking, and multiple escape attempts, it’s my best guess.

All it takes to set JR off is to pull these out of the medicine cabinet. 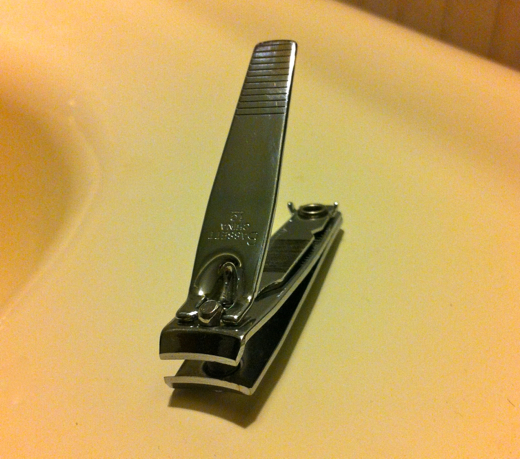 The horror. THE HORROR.

He cries. He sits on his feet and shoves his hands in his lap. He pleads with me to cut his nails “not on this day, another day, Mama, ok?” He cowers in the corner, for crying out loud.

Now before you feel too bad for JR, let me assure you that his fear is not the result of prior trauma. I have never drawn blood or clipped his skin; I don’t think I’ve ever even cut his nails a bit too short for his taste. He’s just made the connection that, in theory, nail clippers could potentially hurt him. And while I’m grateful that his inferring skills are quite sharp, it’s really getting to be a pain in the ass.

In the event that I actually convince JR to unfold himself and let me at least try to tame the talons,4 it typically goes like this:

Me: (singing ever-so-sweetly, as only a mother can) This little piggie went to–

JR: AHHH THAT IS HURTING ME.

Me: I promise, I’m not going to cut you. Mama would never hurt you on purpose. OK?

JR: (whining ever-so-brain-meltingly, as only a three-year-old can) …OK.

Me: Let’s try again. This litt–

We do that over and over again until A) I give up after two fingers and he’s left with eight still-scraggly claws or B) I bargain/scold/threaten him into submission and he shlumps out of the bathroom with his trimmed nails and a tear-stained face.

Nail trimmings weren’t always so dramatic for us. Back when JR was a gurgling blob of baby, I would just wait until it was time to nurse him. As he curled up next to me, I would gently snip away at each impossibly tiny fingernail until it was time to switch sides and do the same to his other hand.

But once JR weaned, I quickly learned that my technique, while wildly successful for nine solid months, was also seriously flawed. Since I’d only ever clipped his nails while he was in a nursing-induced stupor he’d never even realized I’d been doing it. So basically we were at square one—and not even at square one with a tiny, clueless newborn like all the other rookie parents. Instead we were left to convince a relatively cognizant and very mobile child to sit still while we attempted to remove part of his body with a sharp object.

No wonder the poor kid kept (and keeps) going batshit crazy at the sight of those things.

But regardless of his perhaps very valid fear, we need to get this situation figured out. It’s not like a fear of the ocean or of flying; one can steer clear of both of those without risking ostracism at the hands of his fellow preschoolers. Meanwhile I’d prefer JR to fully embrace the ins-and-outs of personal grooming and I can’t wait to see him place some interest in the Top Mens Double Edge Razor for Classic Shaving so he can avoid becoming That Kid one day. I don’t know I always admired the kids my age that started to shave before me.

So what we do? Tie him down? Promise him a puppy for each trimmed nail? Leave him be until his own nails gross him out? Encourage a nail biting habit? Lay it on me, fellow parents. I know I’m not the only one who’s ever faced this challenge—and I’m pretty sure you’d all support me in my efforts to keep my child from quivering in fear whenever I reach for the medicine cabinet.