Find out how Mr. Stingy, Mr. Sneezy, Little Miss Perfect, and the rest of the gang helped my three-year-old son shatter my heart into a million little pieces (in the best possible way, of course). Whenever my son JR and I would go to the Children’s Museum, we would have the same conversation over and over again. It went a little something like this:

“Hey, JR! Let’s go in the art room and make something!”

“NO PROJECTS. I WANT TO PLAY AT THE WATER TABLE.”

Lather, rinse, repeat until one of us was crying or it was time to go home for lunch.

On the rare occasion that I actually tricked JR into completing a craft, his approach was purely functional. For example, when I’d suggest painting, he’d coat the paper from edge to edge with one solid block of color and squirm on to the next thing as quickly as possible.

I know: not a big deal. First of all, such an approach to painting and crafts is typical of an energetic three-year-old. Secondly, it could be that he’s just not naturally artistic, which is A-OK. But I was frustrated by the fact that he didn’t seem to want to even try…and I was afraid it was being caused by something other than an age-appropriate case of The Fidgets.

As I’ve shared before, JR and I are cut from the same cloth. I know I have a tendency to avoid activities I think I won’t be good at or I don’t grasp right away. I’m probably projecting here, but seeing JR do just enough on art projects to shut me up was worrisome for me. I didn’t want his insecurities to hold him back from something as expressive, formative, and just fun as getting his hands dirty and making something. Anything, for Pete’s sake.

I wasn’t going to pressure him, but I wasn’t going to give up either. We made collages using absurd amounts of glue. We stocked up on new crayons and coloring books (selected by JR and Spider-Man themed, of course). We even spent time illustrating stories he dictated to me (mostly about Spider-Man) and posting them on the wall (and the Internet) for everyone to see.

After all that, he seemed slightly more tolerant of the whole concept, but by no means enthusiastic.

Until we found the “Mister” books, as he calls them.

We’ve lived in our house for almost four years, but our upstairs loft is still home to quite a few boxes we’ve yet to unpack. Most of them are filled with books that we’ll move to JR’s bookshelf when he gets a bit older–easy readers and the like. They all belonged to my husband when he was a kid, and my mother-in-law passed them along to us when we moved into a house with more storage space.

One evening at bedtime, JR declared that all of the books in his room were “for babies!” and he needed new ones. Desperate to get him settled-and-off-to-sleep-already, I scurried upstairs to look through this stash of books for something that would suit his taste–which, incidentally, becomes suspiciously particular around 7:30 every night.

Tucked away in one of the boxes was a plastic bag stuffed with little books. Thirty-four little books, actually, all from Roger Hargreaves’s Mr. Men and Little Miss series. You know what I’m talking about–those five-by-five-inch books that came out in the late 70s and early 80s and feature oddly shaped creatures whose names reflect their most notable (and often undesirable) characteristics. Think Mr. Nosey, Little Miss Chatterbox, Mr. Busy, and so on.

First we read Mr. Fussy. Then Mr. Stingy. Then Mr. Tickle. JR was hooked in no time. All other books were cast aside in favor of these decades-old, formulaic (but delightful!) stories. We read them everywhere: in bed, at the table, in the bathtub, on the toilet, you name it. Dude could NOT get enough. There were even some nights when he refused to go to sleep without a stack of them in bed with him. I’d peek in his room and find him snoozing in a nest of teeny, tiny, yellowing books, typically clutching a few in his chubby little hands.

About two weeks into his Mister books obsession, something amazing happened: for the first time EVER, JR asked to draw pictures. On the inside, my mind rang with the sounds of a majestic choir singing the Hallelujah chorus; on the outside, I played it cool. You see, when it comes to JR, you can’t make anything seem like it’s too big of a deal, or that it’s at least really, really important to you. Either being the center of attention will spook him or he’ll pick up on the fact that he has even an ounce of control of the situation and will abuse that power as much as possible…as three-year-olds are wont to do. So when it comes to things like this, I tend to stick to a motto of “no sudden moves.”

I responded to his request with a breezy, “Sure” and set his little white board on the dining room table. JR crawled up into his chair and carefully removed the cap from a black dry-erase marker. He started off with a few scribbles and then tried writing his name. But after smudging away those marks with his fingertips, things got more intentional.

I watched as he set his tongue firmly in the corner of his mouth (his “working face”, I call it). Very slowly and very carefully, he looped the marker across the surface of the board, forming a wobbly circle. He drew one half of a mouth, then the other. Then two dots for eyes, followed by two lines at the bottom for legs. Finally, a smaller circle in the middle of the larger one. 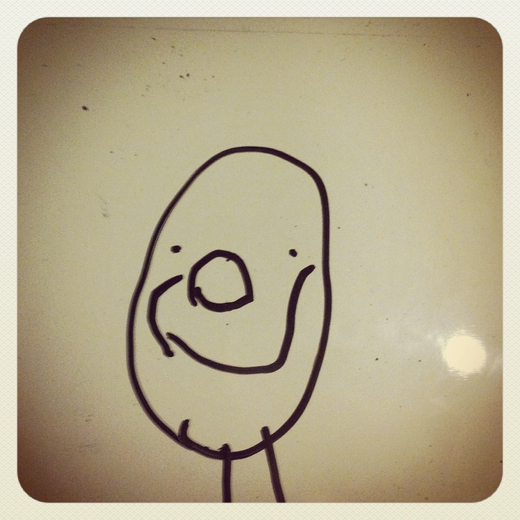 And I totally cried.

For a while, all of JR’s drawings looked like the one above, but eventually he started to develop his own “style”, if you will. According to him, people are still only composed of giant heads and little legs (no bodies, arms, ears, or hair to speak of), but now everyone’s eyes are positioned on the very edge of their heads and their mouths blend in with their chins. 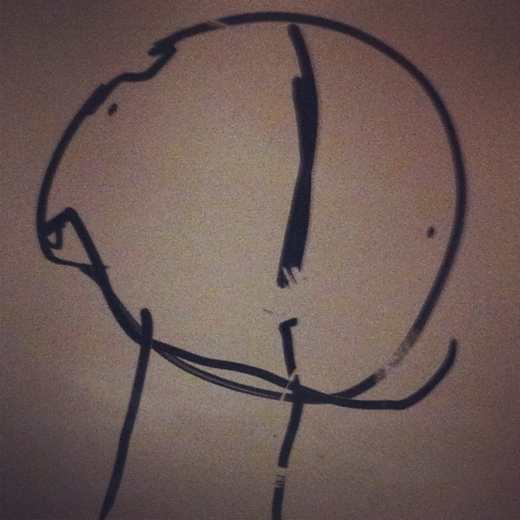 JR’s interpretation of Aang from Avatar: The Last Airbender.

I cannot get enough of them. I would frame every single one and hang them in a shrine-like fashion over our fireplace if society wouldn’t deem it creepy. And it’s not just because I think they are hilarious and cute (which they clearly are, I mean COME ON). It’s because one of my strongest desires as a parent is to really understand how my child thinks–what makes him tick, what inspires and excites him. I’m constantly floored by the fact that this little person who started out as a bunch of cells in my belly is now out and about in the world having his own opinions and thoughts about things–like he’s a real person or something. Watching him put pen to paper and draw helps me get to know him better…but in a way that, for me, feels so different from what we get during a conversation with him.

I don’t know why I value this so much. Maybe it’s because I’m a writer and not a talker. But I do know that the look of pride and excitement on JR’s face when he intentionally made something broke my heart in the best possible way. It was (and still is) by far my absolute favorite JR “first.” I can’t help but think we owe that experience, at least in part, to Roger Hargreaves’s little books–to his quirky (and, apparently, inspiring) squad of Mr. Men and Little Misses.