The Science Museum of Virginia offers up a fun and fascinating exhibit where kids (and their parents) can explore what makes humans and robots different. Before our son JR was born, my husband and I had a friend paint a robot mural on the nursery walls.1 We have an Roomba we talk to regularly, and who I refer to as my “cleaning staff.” This and this are in our regular bedtime reading rotation. References to Cylons pop up in our conversations at an embarrassing frequency. I also remain convinced that my husband is, in fact, an example of artificial intelligence2 and regularly blame his infuriatingly logical approach to everything in life on his –CLANG CLANG–robot heart.

All of this is to say that robots are kind of a thing in our house.

So, of course, I was pretty stoked to find out what the Science Museum of Virginia had in store for us this summer: an entire exhibit exploring the world of robots–how they’re like us, how they’re not, and how far the technology behind them has come in recent years.3 And my video-game-loving, circuit-building4 four year old? Let’s just say that “beside himself” would have been a gross understatement.

When JR is excited about something he babbles incessantly, bombarding you with questions at a rate so rapid there’s no possible way you could ever answer them. Which is fine because he’s too out of his mind with anticipation to actually listen to you. That’s exactly what happened last Wednesday as we headed down Broad Street to check out Robots + Us, a new exhibit created by the Science Museum of Minnesota that’s set up shop at SMV through the end of September. Proudly wearing his Star Wars T-shirt–featuring none other than C3PO and R2D2 because, hello, robots–JR sat perched in his booster seat, mouth going a mile a minute…

Will there be a robot man walking around? If there is, I don’t want to talk to him I just want to see him.5 Are we at the shy-ence museum yet? Do you think we will get to look at a robot’s brains? Do robots even have brains or do they just have batteries? I wonder if there will be robot ninjas that I can fight. Do you think they will have those? Is this the museum? Are the robots in there? Can we go in, Mama? Mama. Mama. Mama, is this the place with the robots?

You get the picture.

His excitement (and chattiness) continued as we made our way into the exhibit, greeted by this guy–I’m told his name is Larry–who was ready to start our journey into the world of robots with a delightful cheesy photo opp. 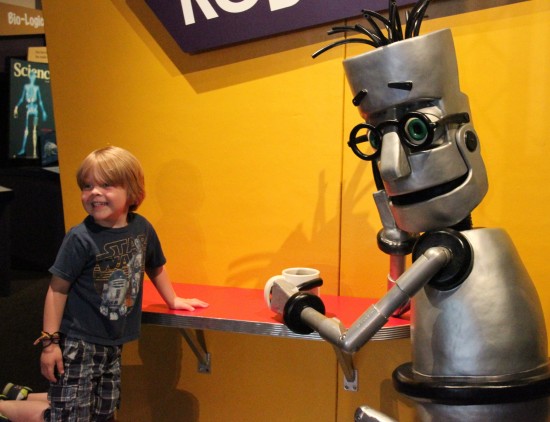 From there we engaged in an epic tangram face-off with an industrial robot arm, racing to see who could assemble various puzzles faster: man or machine? JR and I lost spectacularly each and every time, but the robot’s sassy bow after kicking our butts took away the sting of defeat.

The hands-on fun continued as we typed the names of all of JR’s friends in the text-to-speech station; someone6 might have gotten the giggles as we adjusted the pitch and speed of the computer’s “voice.” Then, after experimenting with facial recognition software (and trying to stump the computer with the help of funny hats and glasses) and testing our ability to tell the difference between human- and machine-made works of art (it’s harder than you think), we headed over to the Robot Arena where we used flashlights to guide light-seeking robots through mazes we constructed ourselves. 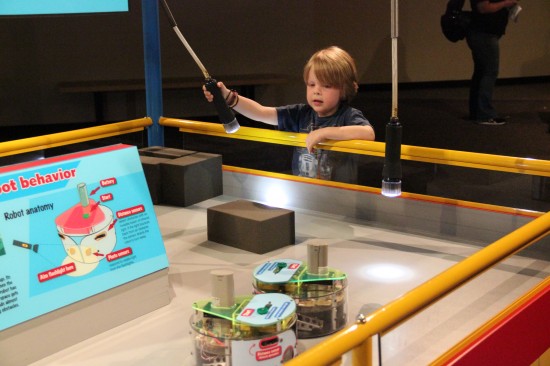 Next up was a lengthy stop at the Sensory Garden–perhaps the most preschooler friendly station–where visitors can control small robots with sound, light, motion, and air. JR couldn’t get enough of this stop on our tour through Robots + Us, frequently bouncing back over to the station to give it “just one more try.” I think he just really liked having free reign to shout at the sound-operated robots–you know, because it was for science. 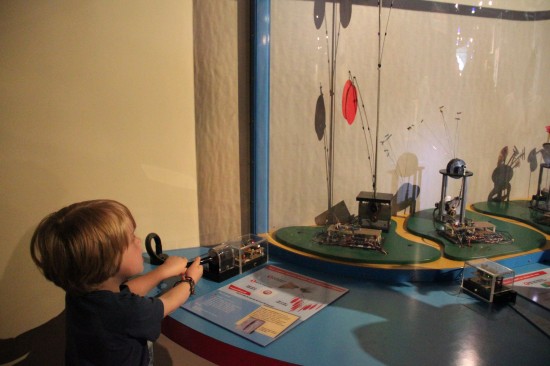 Robots + Us ends on a exceptionally high note with a chance to try your hand at building a real, walking robot.7 JR and I started off by following the step-by-step assembly instructions provided by the museum but eventually branched out and tried our own designs and let them loose on the station’s stairs, AstroTurf, hamster wheel. It proved to be pretty tricky at times–lots of going back to square one with our little electronic friend–but I think JR and I showed a lot of robot-building mettle,8 pressing on until we got the job done. 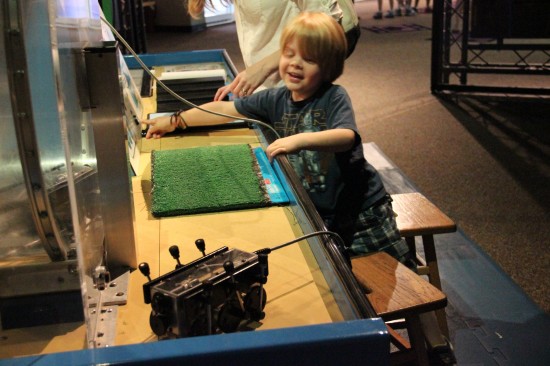 Thanks to the extremely hands-on setup of Robots + Us, children of all ages will love it. Those of you with older kids might even get a chance to slow down and take a look at the more text-heavy displays explaining how the inner workings of clocks inspire Renaissance scientists or videos tracking the evolution of robots in pop culture. JR wouldn’t sit9 or stand still long enough to appreciate those, but I imagine they only add to what amounts to a truly fun and extremely educational experience.

I mean, look at the kid’s face. He made this face while learning! You can’t beat that, folks. 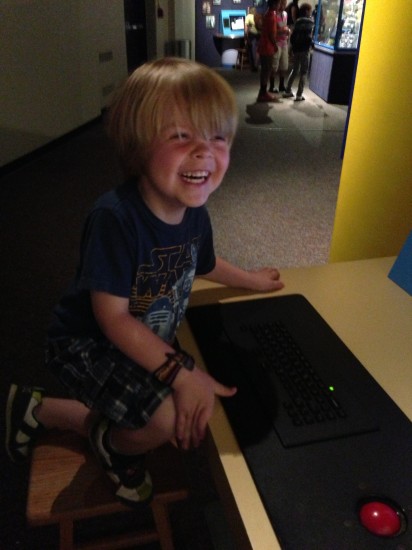 Image courtesy of me, JR’s mother