As our son gets older, I’ve found that we need to get a bit more creative with our parenting–particularly when dealing with those more “challenging” situations inherent to life with a three-and-a-half year old boy. Check out what I consider to be our parenting “greatest hits”, if you will. I’m glad that our son JR is out of the “baby stage,” but I must admit that I sort of miss those days when he was an immobile and relatively complacent little blob who went where I wanted him to go and did what I wanted him to do. His needs were concrete and simple: feed, clean, cuddle, sleep. The end.

But now? He’s like…a person. With thoughts and opinions and life skills that need developing. Don’t get me wrong; it’s thrilling to watch him grow up and all. But I’ve found that as he gets older, we need to get more creative—particularly when dealing with those more “challenging” situations inherent to life with a three-and-a-half year old boy.

Below you’ll find what I regard as our “greatest hits”, if you will–tricks that have made our lives as parents a bit easier and taught our kid a thing or two. Use them. Make them your own. May they bring you the same peace and sanity they’ve brought us.

When JR started preschool, we entered the world that is “Show-And-Tell Obsession.” He goes to school only on Thursdays and Fridays, so he used to spend the remainder of the week repeatedly asking, “Is today a school day?”1 His enthusiasm was cute, of course, but hearing that on a constant loop was…not. A calendar was our obvious answer, but I knew it needed to stay focused on just one week at a time; looking at a full month at once would send JR into anticipation overdrive.

So I kept it simple: seven 5×8 index cards stuck on the lower part of the fridge, each labeled with a day of the week. On Saturday night we stick colored Post-It notes labeled with our to-dos to their corresponding days for the following week: green for regular events like school and church, and pink for one-offs. To make it a bit more fun for JR, I cut out a picture of his face and stuck a magnet on the back. Each morning he hurries downstairs and moves his magnet to mark what day we’re on and checks out what we’ve got planned (we help him with the reading, of course). For us it’s a total win-win: he feels like a big boy for having a schedule, and I no longer feel like I’m going to lose my damn mind from answering the same question over and over again. 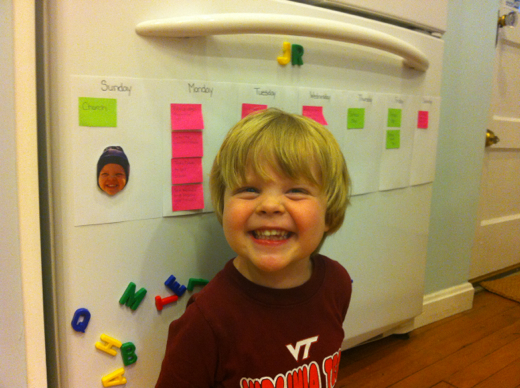 I’m hell-bent on raising a young man who not only cleans up after himself but also pitches in when a group effort is needed.2 JR is still a bit young to help with the dinner dishes, so we came up with a task that is unlikely to end with anyone picking shards of glass out of his or her foot: napkin clean-up. We’ve got two bins tucked away on a rolling shelf in one of our lower cabinets; white napkins and dish rags go in one bin, colors go in the other. Once we’re finished eating, it’s up to JR to grab the napkins from the table and put them in the appropriate bins. He typically needs a few reminders as to where he’s going and what he’s supposed to do once he gets there, but hopefully this little chore will set him up with some good habits. Plus it gives him a job during that post-dinner, pre-bath/bedtime window where the riffraff potential is particularly high. 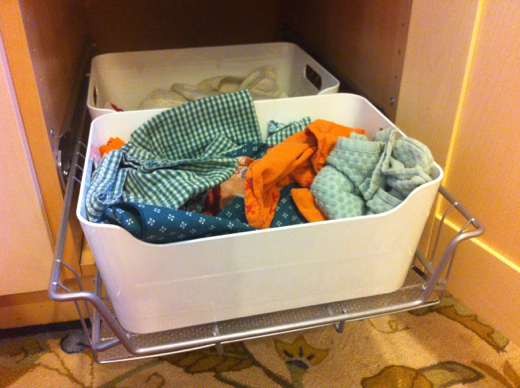 Look! I **literally** put my dirty laundry on the Internet.

A bucket of one’s own

While JR happily sits and leafs through book after book until the cows come home, he’s never been one to jump at the chance to “write.” While I wasn’t overly concerned about his aversion to putting pen to paper,3 I wanted to make sure we were doing everything we could to, at the very least, let him know that writing is a cool way to spend one’s time.4 His teachers suggested we help JR create his own writing space to which he always has access; it should be personalized and fun but set up in a way that it becomes more a part of his routine and less of an “event” that could potentially spook him.

(These people know my son well.)

That day I brought home a plastic…utensil…caddy…bucket…thingy5 from the dollar bin at Target. JR and I filled it with a few pieces of paper, colored index cards, and an extra notebook, along with an Elmo cup filled with pencils, markers, and ballpoint pens.6 I left the decorating up to him; he went with approximately 70 million monster stickers, most of which he placed inside the bucket so you can’t actually see them.

JR’s portable writing center hasn’t only increased his interest in writing; it’s also come in handy when I need to get some work done during his waking hours—a once almost impossible feat. In fact, he noticeably puffs up a bit when I say, “I’m going to do a little writing. Why don’t you get your bucket and work on your writing, too?” Of course I then get nothing done because I’m too busy watching him being all serious and cute, but whatevs. 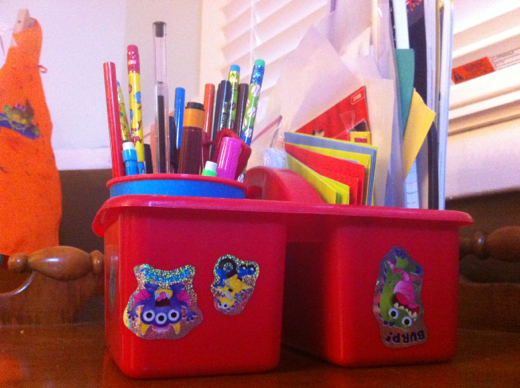 Apparently the monsters also needed to be upside down. Because why not?

I’m going to keep this one simple, because it is. SIMPLE AND MAGICAL. Here’s what you do:

Granted, you will likely spend many, many minutes cleaning rice up off the floor once playtime is over, but you won’t care in the slightest because: ONE HOUR!!! 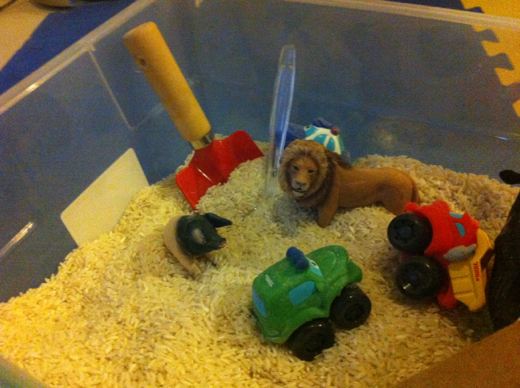 When JR became fully potty-trained, we had to deal with the challenge of teaching him that even though he was allowed to get up and go to the bathroom as needed throughout the night and early morning, that didn’t give him free reign to wander the house whenever he pleased. After a few days of middle-of-the-night wakeup calls, I reacted in my typical fashion: gnashing my teeth and complaining about it on the Internet. However, my husband Ross decided to do something about it. He sat JR down with his old digital alarm clock and conducted a bare bones course on telling time—specifically on when JR could be out of his room (any time after the clock says 8am) and when he couldn’t (any time it doesn’t, save trips to the bathroom).

Believe it or not, it only took JR a couple of days to catch on. Now every morning we hear him get up at around 6:30 or 7 and scurry off to the bathroom. He then immediately goes back to his room and plays by himself for the next hour or so until he can proudly bellow, “Dada! The clock says 8!” and immediately barge into our room.8 But considering the alternative, I’ll take it. 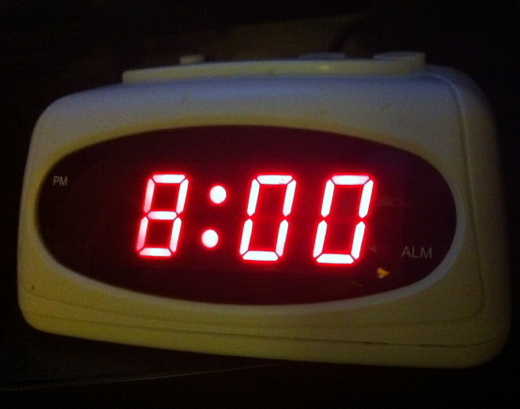 Any sanity-saving parenting tips and tricks you’d care to share? Or perhaps you’re currently banging your head against the wall (literally and/or figuratively) over a challenge with your little one and you need a bit of help? Leave your thoughts in the comments.