As we contemplate moving our son to a new bedroom, I get all weepy over his nursery and some of the treasures that make it special. (Yes, I said “treasures.” Because they so are…Don’t you dare judge me.) We’re gearing up1 for some renovations in our house. Our second floor bathroom is getting an update (because bathrooms from the 1930s, while charming, don’t always “work”) and we’re replacing the gross shower currently rotting away up in the third floor loft space2 that was once part of the attic. Then the plan is to eventually turn that loft space into a new bedroom for our son, JR.

JR’s current bedroom is right next to ours, just at the top of the stairs. This arrangement was super convenient during the baby/toddler years; just popping next door to retrieve him for 3:00 AM feedings or trips to the bathroom is, I imagine, preferable to (and safer than) schlepping your sleep-deprived self down a long hallway or up a flight of stairs.3

But now that he’s older, the proximity is becoming a bit of an issue, mostly because of bedtime. We put JR to bed at around 8:00 PM. Sometimes he falls asleep right away, but most nights he needs to just hang out and unwind for a while. This wouldn’t be a big deal except for the fact that he typically spends that time perched in his bed, peering out into the hallway4 for any sign of movement from us–movement that prompts relentless croonings of “Ma-muhhhhhh?” and requests for more water, another book, one more song, a blanket that “feels less weird”, and so on.

Also I’d really like to be able to walk from my bedroom to the bathroom in my underwear without comment from my son. As JR gets older and more and more mortified by everything his father and I do, I’m sure he’ll appreciate the additional breathing room as well…and not seeing his mother in her underwear.

While I’m excited about us all getting a little more privacy–and the prospect of finally having space for an office-slash-guest-room5–the thought of moving JR out of the room where he slept as a baby makes me a little weepy. That space has become such a sweet reminder of his babyhood, and putting it together was a true labor of love for me as we awaited his arrival.

When the time comes to move JR up to his new room, we won’t scrap everything, but there are a few things that will find new homes (in our house and beyond), end up in storage, or just receive a fond farewell. You know, bits and pieces that, while adorable and beloved, likely won’t make the cut as we transition our little guy from the digs of his babyhood to a cool spot to hang out as he gets older. 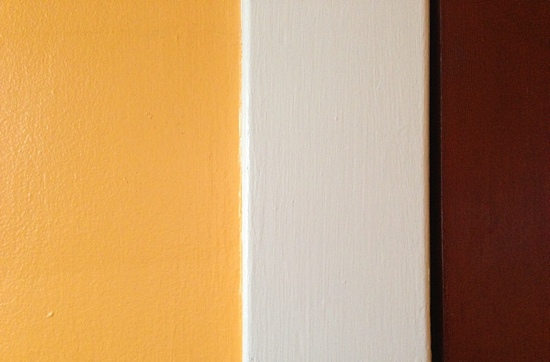 We decided not to find out if we were having a boy or a girl, but we wanted to go for something other than the typical gender-neutral choices (i.e. green and yellow) for the walls of our baby’s room. This color is called “Vintage Orange”, and my husband and I loved it right away. Other people…did not. I remember standing in the paint department of Home Depot, pointing out my selection to the nice man behind the counter, when a woman sidled up next to me. She glanced down at my seven-months-pregnant bellow and drawled, “Oh, honey. Puh-lease tell me that color isn’t for your sweet little baby’s room.”

I smiled and asked the man to mix two gallons of it. Turning back to the woman, I crowed, “Looks like it is!” and slapped my hand on the counter in triumph.

It was my first Mama Bear moment, and I’ll never forget it.

Even though we didn’t know the sex of our baby, we knew we wanted the room to have a robot-ish, monster-ish theme, regardless of whether we had a boy or girl. Back in good ol’ 2008, it seemed like anything baby-related was covered in puppies, butterflies, or zoo animals–not like now when robots and monsters are coming at you from every direction.6 So we had to take matters into our own hands. OK, we had to put matters into the hands of friends of ours who are incredibly talented and were willing to bless us with said talents for minimal dollars.

For example, I never in a million years thought we’d be people who would commission a mural for her child’s room…but well, here we are. And I feel like the fact that we’re friends with the artist, and I used to babysit his kid makes it not so “Real Housewives of Richmond.” Mark–a super talented illustrator and all-around fantastic guy–spent hours upon hours cooped up in the nursery, fulfilling my husband’s dreams of “robots, robots everywhere” for our child. 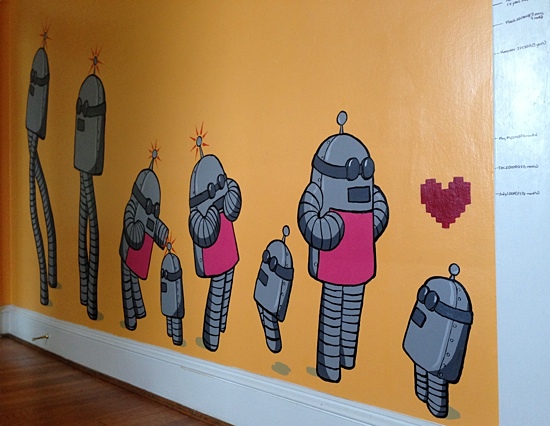 There were many tears when I saw the finished product (I mean, a Mama Robot and a Baby Robot? Come on! And do you see the pixelated heart there?) and there will be many more when the time comes to paint over it. 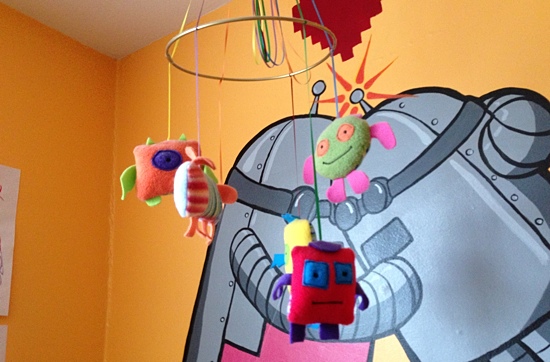 Our friend Deanna7 constructed this beauty after I emailed her probably the most vague request ever. I’m pretty sure I just said, “Hey, would you make a mobile for our baby? With monsters on it or something?” And then she just did! With her own hands! JR loved cooing at these little guys as he hung out in his crib when he was a baby–almost as much as he loved ripping them down and chewing on them once he developed the ability to pull himself to a standing position. I can’t tell you how many times I’ve had to sew mangled monsters back onto those ribbons over the last four years, but I can tell you that it was totally worth it every single time. Walking into his room and seeing this hanging there (now over his little reading area) still makes me a little giddy. 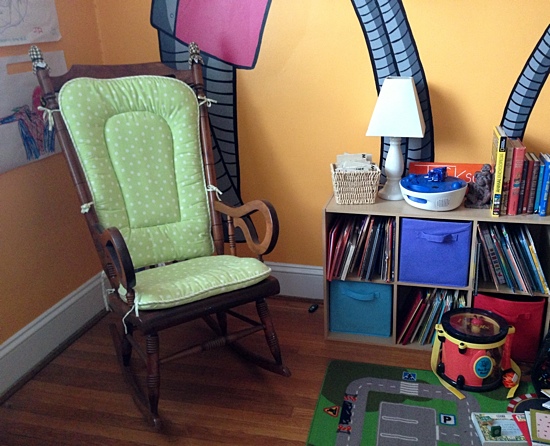 My in-laws received this chair when they were expecting my husband, their only child. They passed it on to us shortly after we moved into our first home, and I couldn’t wait to fulfill its baby-rocking purposes once we found out we had our own little one on the way.

And of course, it was special to hold and rock my own son in the same chair that my husband had as a baby, but my attachment to this chair predates JR’s arrival. During my pregnancy, JR would hold off on dishing out his most aggressive kicks and flips until about 1:00 AM every night. I spent many nights in those last weeks before his birth just rocking back and forth in this chair, looking at the nursery walls, thinking about who this tiny acrobat was, eventually lulling us both back to sleep. 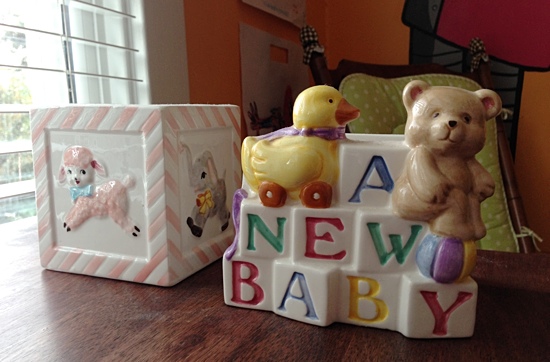 The container on the left held an arrangement of flowers my mom received during her stay in the hospital after giving birth to me. The one on the right held the flowers she sent to me when I had JR. They used to sit on his changing table, serving as containers for the various ointments and doo-dads that come with the whole diapering phase of life. Now they sit on the dresser, waiting to get broken by a certain almost-five-year-old (and butter-fingered) little boy who can quite suddenly reach everything on every surface. 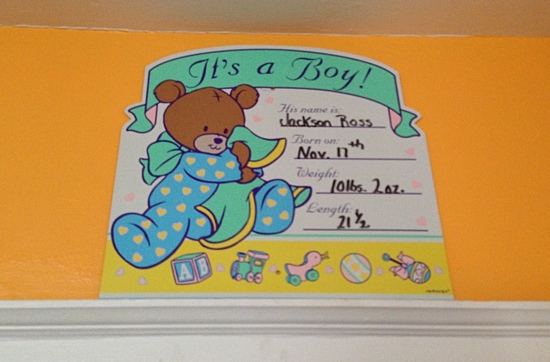 Even though JR was (and is) the first and only grandchild on both sides, we opted for little fanfare when we brought him home from the hospital. No one was there taking pictures as we walked out of the hospital or greeting us at the door with balloons. But there was this sign, stuck in the ground by (I believe) my mother-in-law when she dropped by to stock our fridge with some extra food. I remember tearing up8 as I saw it when we drove up to the house because it made it all feel very, very real. Not the actual baby strapped into the car seat beside me, but a piece of cardboard stuck in the ground. That sweet, simple announcement that we were now three just totally did me in. Still does, sometimes.

Yeah. That one might end up making the cut after all.

What are some your favorite things in your kids’ rooms? I’d love to hear about them. I know I’m not the only one who gets all schmoopy over these things…