The Richmond Symphony kicked off the 2012-2013 season of their LolliPops series on Saturday with a production of Benjamin Britten’s The Young Person’s Guide to the Orchestra, and my three-year-old son JR and I were there to see it. I know: a three-year-old at the symphony. On purpose, even! The Richmond Symphony kicked off the 2012-2013 season of their LolliPops series on Saturday with a production of Benjamin Britten’s The Young Person’s Guide to the Orchestra, and my three-year-old son JR and I were there to see it.

I know: a three-year-old at the symphony. On purpose, even! But believe it or not, JR wasn’t the youngest person in the audience and, I’d say he learned a thing or two and enjoyed himself.1 Not bad for a Saturday morning spent in beautiful downtown Richmond.

LolliPops has been part of the Richmond Symphony since 2009. Lead by Associate Conductor Erin R. Freeman, the hour-long shows introduce kids to the ins and outs of the orchestra, breaking it down to so the young audience can grasp how all of the instruments work together to create beautiful pieces of music.

Prior to each show, the symphony hosts a pre-concert festival with crafts and a “musical petting zoo” where the kids can try their hands at playing some of the instruments they’ll hear during the performance. Despite my visions of an incredibly cute picture of my sweet baby boy tucking a violin under his chubby chin, JR was quite overwhelmed by the crowds and cacophony of the musical petting zoo. We ended up spending most of our pre-show time in the quieter craft room where we created our own shakers and conductor batons; I saw and heard a lot of both during the show, so that was clearly a good project choice by the event organizers.2

The concert was set to start at 11am, so JR and I made our way into the Carpenter Theatre about 15 minutes early to get a good seat. LolliPops is general admission (i.e. first come, first served), and I didn’t want us to end up smack in the middle of a row without easy access to an exit should we have any bathroom or behavior emergencies. We managed to snag two end seats in the third row, stage left, right behind a father and his young daughter. I planted JR in the aisle seat behind the little girl so 1) he would have an unobstructed view of the stage and 2) I could spare our fellow audience members from bellows of “MAMA, I CAN’T SEE ANYTHING!” during the concert. 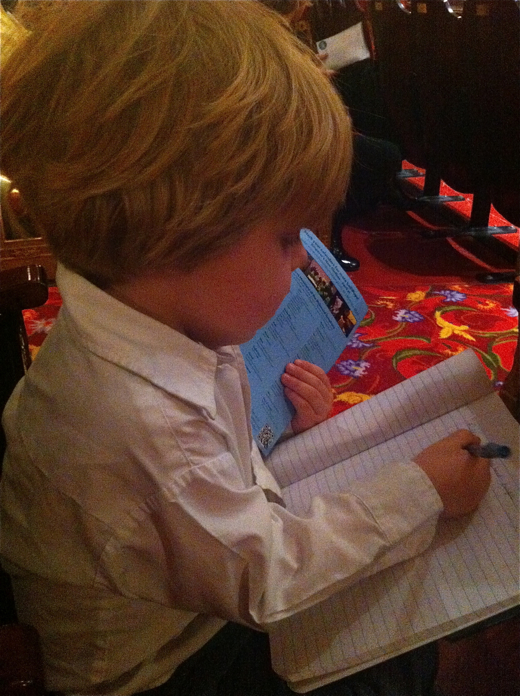 My young co-reviewer taking some notes before the show.

The show began with the recognizable (at least for the adults) and lively “Les Toréadors” from Georges Bizet’s Carmen–a great way to kick things off. As soon as it started, JR clapped his hands over his ears and gave me a HUGE grin; I guess loud wasn’t so bad that time. Next up was Britten’s Soirées Musicales, Opus 9, a suite of five movements, each introduced with quick and entertaining readings from conductor Erin R. Freeman.

Now here’s a pro-tip: before you take your preschooler to the symphony–particularly a preschooler who has been to other kinds of performances before–make sure you go over what he or she is going to see. I failed to do this, so JR spent the first 15 minutes of the concert whispering, “When is the show going to start?” and looking around for people in costumes. He seemed a bit disappointed when I told him, “This IS the show,” but he perked up once Freeman really got things moving. She clearly knows her audience and loves what she does for a living; she was charming and expressive and presented concepts in a way that was age-appropriate but not at all condescending.

JR was also quite taken with 17-year-old violinist Hannah Whitlock, the 2012 Richmond Symphony Orchestra League Concerto Competition winner who was a featured performer in Saturday’s show. Before Miss Whitlock showed off her mad violin skillz, she took a few minutes to talk to the audience about how she started playing when she was four and currently practices five hours a day. The young audience seemed both impressed and stunned by her dedication. Well, for JR, I think it was more about the fact that she was very pretty, wore a very pretty blue dress, and played very pretty music…but he’s three, so I’ll take it.

By the time we got to the “meat” of the performance–Britten’s The Young Person’s Guide to the Orchestra–JR was getting a serious case of the wiggles,3 so I was stoked to see Sara Valentine take the stage as Symphonia Semi d’Quaver, an “internationally renowned ‘Orchestralogist.'” Finally someone in a costume! Who would probably talk in a funny voice! “Bring it on home for us, Ms. Valentine!” I silently (and somewhat desperately?) said to myself.

Decked out in a trim tweed suit, hat, and red spectacles, Valentine kept JR (mostly) entertained as she (and her snooty British accent) took the audience on an enthusiastic tour of each instrument of the orchestra, along with the part each plays within a composition as a whole. Personally I found the whole deconstruction aspect of it all quite interesting, but I felt JR’s attention waning as we went along. So I decided to give him something specific on which to focus–you know, something to “do”4 that would hopefully keep his interest piqued. He loves drums, so we made a little game out of listening for them as the show wrapped up. It worked like a charm, and I only wish I had thought of it earlier on in the show.

The next edition of LolliPops is scheduled for Saturday, April 21st when they’ll transform Hans Christian Anderson’s The Emperor’s New Clothes into a musical fable. If given the chance, I’d probably take JR again. I’m interested to see how he’d respond to more of a storytelling format–especially since he’s now had some concert experience. Plus, I’m going to get that violin picture if it kills me.

LolliPops shows take place on Saturdays at 11am with the pre-concert festival starting at 10am. The Richmond Symphony hasn’t announced its full season yet, so be sure to check their website for updates. Tickets are $12 for children, $17 for adults, and $16 for seniors. All performances are at the Carpenter Theatre at Richmond’s CenterStage (600 E. Grace Street).

1 I’m sure I probably reminded my fellow concertgoers of Jeffrey’s mother from Bill Cosby: Himself, but, hey, motherhood is about sacrifice. right?

2 At least that’s what I’m assuming they were going for. Either way, I remember looking out over the audience at one point and seeing lots of little batons bobbing along with the music in quite an adorable fashion.

3 I have this very specific way of hiss-whispering “Ssssssssssssstop it” that is very effective but had to be pulled out VERY frequently towards the end of the show.

4 Other than making repeated attempt to remove his shoes and socks. It’s always the shoes and socks when he’s trying to make me crazy…because he knows it works.