A store that sells monsters, makeup, and internet memes. The most unexpected customer base Premiere Costumes serves are church mimes.

Yes. You read that correctly.

“A lot of churches have mime groups,” said Chelee Lattimore, manager of the 40-year-old Carytown shop. “We do a lot of business with them.”

Serving Richmond’s costume and makeup needs for eight years, Lattimore’s theory about the emergence of church pantomime is thus: “I feel it may have started with the clowning business,” she said. “Clowning has always been popular. But in the urban community, I believe, it became more popular a few years ago. Just bringing the kids together, giving them something to look forward to in certain areas. And probably from that, I’m thinking the miming and the praise dancing became more popular.”

“It’s another way for folks to express themselves with their religions,” Lattimore said. “And we’re happy to be able to help out with their makeup needs and their costume needs if we can.”

Premiere Costumes has helped Richmond with its makeup and costume needs for 40 years. And as with every year, the weeks leading up to Halloween amount to the business’s busiest. “It’s one of those holidays where people wait until the last minute,” Lattimore said, who has taken on seven part-timers for the holiday alone. “I started as a sales associate, Halloween help, as a matter of fact,” Lattimore said. “Got a little addicted to the idea of the wigs and the makeup and turning customers into their fantasy characters.” 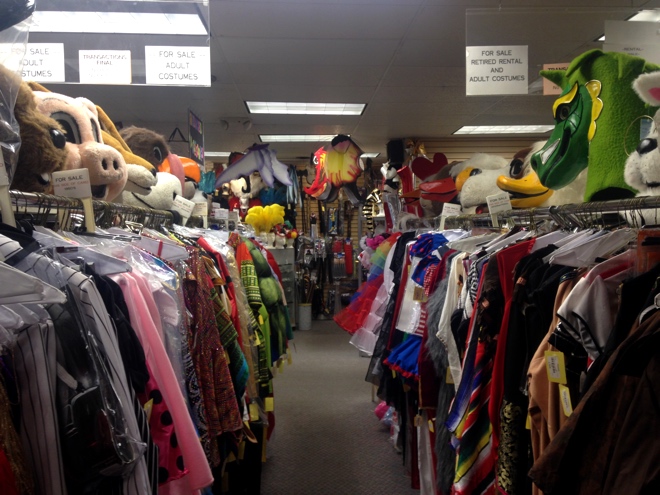 “The princes and super heroes are always popular; super heroes maybe more right now just because of all the super hero movies that have been coming out,” she said.

Like other businesses, the costume industry isn’t immune to the lingering effects of a poor economy. “People have been spending their money a lot more wisely, but they still want to have fun,” Lattimore said. A lot of folks are putting together their costumes a little bit more on their own, maybe grabbing accessories and putting together their own ensembles.”

“A little black dress can be turned into something Victorian, Egyptian with the right jewelry, headpieces, things of that nature.”

Although Halloween, Lattimore estimates, accounts for roughly one-third of Premiere’s yearly business, the store is far from a ghost town the other 11 months of the year.

“We do have other major holidays that contribute a lot to the business,” Lattimore said. “We’ve got about 40 Santa suits that go out [i.e. are rented] at least two or three times. Then Easter is huge. There are a lot of holiday plays that go on, so we do a lot of religious type things, biblical ensembles. And then for Easter we [also] do a lot of bunnies. We’ve got about 35 bunnies.” While bunny suits will set you back $60 a day, most rentable costumes are $50 per day.

Holidays aren’t the only reason for people to dress up. “Some folks are really into the whole lifestyle of costuming,” Lattimore said. “We get a lot of young folks who dress in Anime, which is all year long. They do these conventions and this is something they take really seriously. Their costumes are probably the most exacting of the folks that we dress.”

Cosplayers are also store regulars. “They’re very serious about their costumes as well. So that’s a year-long thing for us and for them,” Lattimore said. 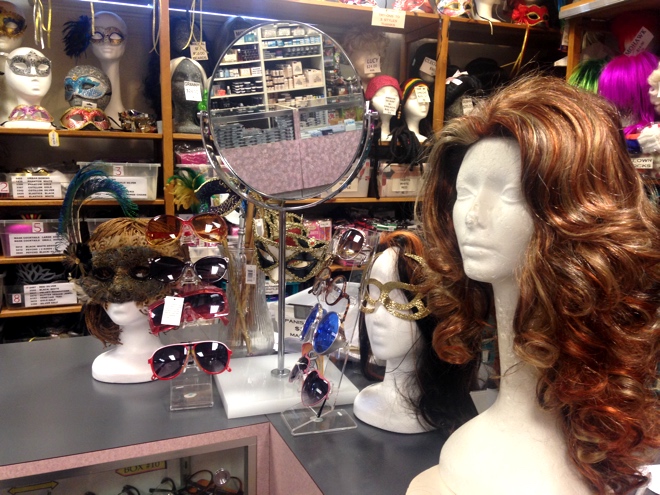 Not only do local productions help Premiere’s bottom line, they testify to Richmond’s arts culture. “Theres a lot going on, that I didn’t even realize was happening in the city…until I started working here. But it’s good to know that folks are out there having a good time and the arts are well alive,” Lattimore said.

Professional designers and performers aren’t the only ones that tap Premiere’s resources. “The children have to dress up an awful lot these days for book reports and things,” Lattimore said. “We do a lot of colonial [subjects], and the presidents: Lincoln and Washington, and important characters in history.”

Among their collection of masks, which Lattimore estimates to be “at least 100,” is the famous V for Vendetta false face the Occupy movement made popular. “People are still finding that interesting,” Lattimore said pointing to a small pile of the Guy Fawkes guises. Are people still buying those? “Oh, yeah,” she said. “They’re keeping that Anonymous thing alive.”

But masks overall are no longer in vogue. “We get lots of try-ons, but they don’t sell as much as they used to,” Lattimore said. But there are exceptions. She pointed to the memetic Horse Head Mask on one of the shelves. “But those horses,” she said, laughing. “They’ve become a phenomenon online.”

Having spent the better part of six years helping Richmond play pretend, Lattimore has unique insight into why people dress up and don different identities. “It allows a person a chance to go outside of their everyday norm and take on a persona, which is maybe totally different from their normal persona, or maybe [one] they wish they could be,” she said. “It’s a break from your regular, normal, everyday monotony that just can drag you down…a chance to be something different from what you are is why I enjoy it.”

“It’s hard to imagine other folks just living in their own world everyday,” she said.