After an enlightening trip to Southeast Asia, Richmond DJ (and UR employee) Carl Hamm takes listeners into the world of Malaysian pop music, a sound influenced by American favorites like The Beatles and Cliff Richard and The Shadows.

Hamm is the host of “If Music Could Talk” on WRIR 97.3FM and a multimedia specialist for the Multimedia Services at the University of Richmond School of Law.

Hamm’s travels took him to Singapore, and Johor Bahru and Kuala Lumpur in Malaysia, where he spoke with 19 former Pop Yeh Yeh artists to interview them about their involvement in the pop sub-culture boom for a documentary, currently in the works. While he was there, he also got the artists’ permission to re-release their songs on the compilation CD.

“I’ve been listening to their music for about six or seven years,” Hamm said. “I do a radio show and I was always looking for music to turn people onto, and I kind of got hooked on Malaysian Pop, which is commonly called Pop Yeh Yeh.”

RVANews spoke with Hamm about his recent research trip as well as his plans to introduce his findings on the “overlooked” Malaysian music scene to the Western world.

So, what exactly is Pop Yeh Yeh?
Pop Yeh Yeh artists were influenced by bands like The Beatles, and Cliff Richard from The Shadows. They did a lot of clean, but still kind of twangy-surf guitar and instrumentals and were influenced by Cliff Richard’s many romantic songs. Apparently some concerts Richards did over there around 1965 made a huge impression on all of the artists over there.

It has that beach sound but what they did is they took that surf, 60s sound with the guitars and took the Malaysian melody and sang their melodies over this sort of twangy-surf, 60s guitar — and that became what we know refer to as Pop Yeh Yeh, which is this sort of psychedelic, surf-pop from Malaysia.

Where does the name (Pop Yeh Yeh) come from?
Legend has it that the Pop Yeh Yeh phrase comes from The Beatles’ “She loves you,” but actually according to the artists that I talked to, the phrase wasn’t even in the vocabulary back then. It was something that was coined later on in the 80s just to describe that era. So, back then they just called it Pop or Melayu.

When did you first become interested in Pop Yeh Yeh?
I ordered a few records from eBay back in the day when I was just getting started on my radio show and I got hooked on them. I just started buying them all the time and shipping them over from Kuala Lumpur, from actual record sellers online. My collection grew and grew, but I still really didn’t know much about any of the artists and even until the point when I left, I only knew a limited amount.

Where did you get the idea to create a compilation CD?
I got the idea from this record label, Sublime Frequencies, which does a lot of these Asian Pop releases from the 60s. They’ve released Thai Soul songs, several Indonesian songs, Vietnamese songs, etc. but no one in the world had done a Malaysian release. Singapore was the hub of the music because Singapore and Malaysia were still part of the same country back then or had recently broken off. People have covered Singapore and the English songs the artists were doing, but no one has done the Melayu Pop.

In Malaysia, when they finally started writing in their native language over there, it was a big thing. Instead of singing Beatles covers, they started singing their own language so it became their own culture.

How did you get in touch with the Pop Yeh Yeh artists on your trip?
I just had such luck, I met one lyricist in Singapore who pointed me in the direction of a few people in Kuala Lumpur. One of those guys is a major legend — they call him Dato. Dato Rahman Hassan is the head of the whole Malaysian Pop ‘club’ now that they have. All of these artists keep in touch in this network, even though it’s a smaller network. Dato and two others — Adnan Othman and Yusnor Ef — were the main guys that put me in touch with all of the other artists I spoke with. 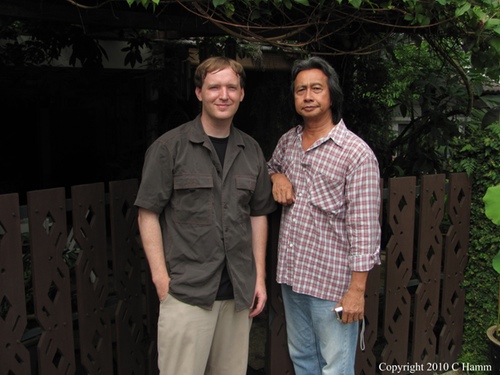 How big is the network of artists?
I would say there are probably about 40 or 50 still alive and of those, about 20 or 30 are still making music.

How do some of the artists remain active?
They’ve done these benefits reunions and for each of those, they’ve gotten 10 or 12 artists to perform and apparently the stadiums sell out. Then there will be this resurgence of interest and then it’ll sort of die off again, but I think the reunion concerts are really helping them stay relevant.

How did the interviews go?
I went over there alone with a cheap camera and limited information on any of the artists, aside from correspondence with a mega-fan based Kuala Lumpur who I had been a pen pal with over the years. He gave me brief summaries for all of the artists so I was able to base my interview questions on that.

Some of the interviews were tough because I didn’t know all of the right questions to ask and a lot of them didn’t speak English very well, but for the documentary I’ve got 18 different artists talking with me for about 20 to 30 minutes each, so that’s enough for each artist to get at least one decent sound bite. I’m hoping to piece it all together and add more information.

What questions did you ask the artists?
I asked them where they were born, when and where they started singing, what their first recordings were, who their backing band was and what their big hits were, if they played on the radio, of they had any hits played on TV.

A lot of times, I tried to ask them what was so unique about Pop Yeh Yeh to them, and a lot of them said, ‘It was a short period of time where we were doing this Rock ‘n Roll thing and it’s kind of hard to describe but it was definitely a Malaysian thing.’ A lot of them confirmed my suspicion that it wasn’t a copy on The Beatles — it was just an adaptation but it was still a Malaysian thing.

I also asked other questions about their generation, like: what were the kids like, what were the shows like, how did the crowds react, what about the fashion?

One of the final questions I asked was about the end of Pop Yeh Yeh and how it turned into the Malaysian Disco-Rock that it turned into in the 70s. I also asked what they were doing now.

What responses did you receive?
A lot of them were surprised that anyone in America had any interest. In Malaysia, with the young kids, they sort of look back at that era as being funny and really old-fashioned. A lot of the youth are listening to Hip-Hop and Heavy Metal. However, there’s still a pretty large group around who remember and love that music. The responses were more general and I got a lot of personal accounts.

What were some answers that stuck out to you?
So, some interesting things were a lot of them recorded in one take or two takes — there was no over dubbing. A lot of them had to borrow their equipment. A lot of the female singers, their parents didn’t want them to go into show business because it wasn’t seen as a proper thing for a young woman to do. Another surprising thing was that a lot of the artists only did one record and then a number of them went into teaching. That seemed to be a popular occupation for a lot of these artists and they couldn’t do both. There seemed to be this respectability thing and you really couldn’t get respect as a musician.

Was there a central theme among the artists’ responses?
All of the artists answered the questions in various ways but there is definitely a core to it — they all remember those days as being really powerful and there’s never been anything like it since. I have more research to do and I may have to go back again before I release the documentary, but my idea is to plant the seed by making the compilation CD out here first and get Americans to start listening to it and then maybe invite some of the artists over here for a performance.

What are your general thoughts on world music?
All music is world music — it just depends on where you come from. People in Singapore and Malaysia were seriously digging the music of Cliff Richard and the Shadows back in the 60s. Meanwhile in the US, we were checking out Ravi Shankar. It’s the same curiosity, and either way, music shares very similar functions in modern times.

I get fed up with the term “world music” because it’s too general. It only gives you one angle of the music they have to offer in any given country — yes, they still play drums made of animal skin and wood in Africa, but they also have a pretty hard core Hip-Hop scene now. I know people are much more aware of the diversity these days, especially because of the Internet. So, the “world music” term is really more a thing of the early-mid 90s when record stores were just starting to stock stuff from other countries.

So, as far as the music I select for the radio and live gigs, I try to get the latest beats and styles from as many different places as I can and mix it up so it sounds like one big dance party in 1,000 different languages. Because that’s how I think the world is these days — it’s all mixed up, in a good way.

Can you tell us more about the documentary?
It will be based on the story of my trip. The story of finding the music and it being so obscure and me going over there. So I want to base it on my journey of finding these artists because that experience is really interesting.

The compilation CD will include about 15 to 20 songs digitally re-mastered from old 45 rpm records issued by now-defunct independent labels which have been personally collected and cataloged over the past 10 years, according to Hamm. This compilation is to be released on the Sublime Frequencies record label, hopefully within the next six months.

For more information about Hamm’s research, you can take a look at his travel blog or listen to the first radio show he completed upon his return from Singapore and Malaysia here. You can also check out podcasts of his recent WRIR shows on his website Carlito’s Blog.