He’s painted Robin Williams, Bono, and Taylor Swift. His art has been featured on over 1,200 magazine covers. Later this month, America’s “painter laureate” comes to RVA. One of America’s most recognized artists, Peter Max, will be in Richmond later this month to promote a specially-curated exhibit showcasing some of his best known work.

Max, whose work spans over 50 years, made headlines in 2010 after painting portraits of Taylor Swift in his signature pop art style. “Of course she’s a big star…and I love her music,” said the 75-year-old.

In a stroke of artistic irony, Max originally studied to be a realist painter. But the artist abandoned the style in favor of another, one that took root in chalk paintings he created on a Shanghai street.

Max’s parents fled Nazi Germany in 1938 to Shanghai, China before Max was a year old. He and his family lived near a walled-in park with a small open lane where Max and his friends often drew with colored chalk, “never ever thinking that that could lead me to being an artist.”

Max’s mother recognized her son’s artistic interests and asked a tripod artist who worked a block away to teach her son. The artist declined, but sent his daughter instead. “She came in with a stack of paper” and supplies, said Max about her first visit. He was three; she was seven. “She came back every day, seven days a week,” he said. She did so for the next seven years.

“By the time I was ten, we left Shanghai.” He remembers standing on the boat that was to take him to Israel, looking down at the dock, crying as he waved goodbye to his friend and first mentor. “I didn’t realize how attached I was to her,” he said. “I still remember today the little spark of sadness that never left.”

It took 48 days to travel by boat from Shanghai to Israel. Max continued art classes once he arrived. After his parents moved the family to Paris, Max took an “afternoon drawing class for kids” at the Louvre Museum.

The family moved to New York City in 1953, where Max continued taking art classes in high school. After finishing high school, Max enrolled in the Art Students League of New York where he studied under Frank Riley, an instructor who once attended school alongside Norman Rockwell.

“Riley was a realist like Rockwell,” Max said. Max focused on realism too. “Everything I painted was photographic.”

“But by the time I got out of art school…suddenly photography became the biggest thing in America, and no one needed realism,” he said.

Max later revisited the bright colors and designs he drew in the Shanghai park. Coupled with his fascination with astronomy, Max began painting in a style that he called his “Cosmic ’60s.” The style became known as psychedelic and went hand-in-hand with 1960s American counter-culture. As the counter-culture became more mainstream, so did Max’s work.1

His art became nationally recognized when 7up aped his style for a 1968 commercial:

Max would later appear on The Tonight Show in 1968 and was featured on the cover of LIFE in 1969.

Max’s career wasn’t limited to 1960s success. He was the official artist for the 1994 World Cup and the 1998 Grammy Awards. He says that 1,200 magazine in the last eight years alone have featured his art, and his paintings reside in roughly 1,100 museums world wide. “I’m blessed,” he said.

A collection of his work will be exhibited in Peter Max – A Retrospective: 1960 – 2013 at Chasen Galleries in Carytown from October 19th – 27th. His paintings are available for viewing and purchase.

Turning 76 on Saturday, Max still enjoys what he does. “I paint all day and I love that tremendously,” he said. 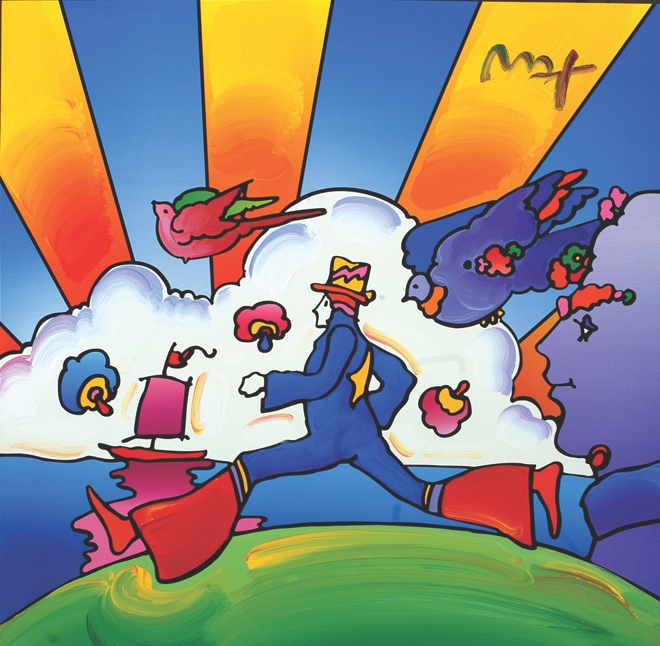