Our House: DNA does not a family make

Maggi Tinsley’s two daughters were conceived and birthed by other women on the other side of the world. She has a hard time finding any other difference between her family and everyone else’s. My daughter never hears “You have your father’s smile.” Of course, as far as she’s concerned, she doesn’t have a father—but she doesn’t have my smile either. Her younger sister, on the other hand, can cry for her “real” mom when she’s super mad at me, and it stings, even though we both know I’m the only mother she knows.

When I adopted my daughters as a single parent, I understood that we would be an atypical family, yet I made sure to tell everyone we knew that we were just like them, that my children had been adopted—they had experienced this important life event—but that no one should say they are adopted. This one-time act was not to define them.

And yet anyone who sees us can pretty much guess that we are a family formed through adoption, what with our being a white midlife mom and two Asian kids. No one has ever given me the chance to respond to “Does she look like her father?” with the zinger a fellow mom plotted: “I never saw his face.”

I wish that I had seen the beautiful faces of my children’s birth parents. They must be gorgeous, because my girls are. The reality is that chances are extremely slim that we will ever even know who they are, or why they “made an adoption plan,” as we euphemize the abandonment that places children, mostly girls, in Chinese orphanages. I will also never have any of the useful health information one gains from knowing family history.

For the present, though, we don’t need that. At 10 and 14, my girls are healthy and bright and fun to be around (most of the time—there is a teenager in the mix, after all). While I am happiest with a knitting needle in my hand or a backyard hen on my arm, older daughter loves roller coasters and scrolling her apps; youngest, when not cartwheeling or kicking her soccer ball, is a sucker for reality TV (versus her sister’s preferred fantasy thrillers). All of us get lost in books. We are a family like any other: varied in our ages and our interests, skilled at pushing the buttons to annoy one another, and united in our love. That we happen not to all look alike or have the same birthplace is not the most salient fact about our trio.

I’m glad my girls have reached an age where we can turn away and discuss how the encounter made us feel.

The question I do often hear makes me cringe: “Are they sisters?” Usually the inquiry comes from a well-intentioned stranger, or at least one not trying to offend. My response varies from a cheery “They are now!” to a glaring “Yes,” my eyes threatening “You wanna make something of it?” I doubt other moms shopping with a pair of kids are asked whether they are siblings. Throw in the word “real,” and I’m going to answer that no one is “pretend” here. I’m glad my girls have reached an age where we can turn away and discuss how the encounter made us feel. When they were young, I had to try to brush it off as something—or someone—silly. Which it isn’t at all.

We’ve been a family for 13 years, and I can count on one finger the times a kid has misstepped regarding anyone’s visible difference—and because that kid was a second grader, I gently talked through with the child why something jokingly racist was not funny but in fact really mean. Now when I overhear a young person ask my child, “Is that your mom?” I honestly don’t know whether they want to know why I don’t look like her or whether they think I might instead be her grandparent.

In many conversations with parents who conceived and delivered more than one child, I’ve learned that biological siblings can differ from one another as much as my two do. I have an introvert and an extrovert, an arty girl and a STEM-y one. They wrestle like puppies. Younger mimics older. They’re the same; they’re different. They are sisters, like any other pair of girls who share a home and a parent or two.

My girls have always been very matter-of-fact about the lack of a second parent: “We don’t have a dad,” they’ll say, “But we have an uncle!” I honestly cannot thank my brother enough for giving them some guy time—and giving me a name and number to write in that Emergency Contact line on so many forms. My lone sibling, who in turn pushed my buttons and was the STEM-y to my arty, has tossed them in the air, turned them on to the _The Simpsons_, and built them gliders and rockets. We take him on vacation; he takes them to movies I don’t want to see. He may not have read any parenting books, but his instincts are good. We had the same parents, so we both know what we want to be different for “our” girls.

The girls have an uncle, but no grandparents. No first cousins as he, too, is single. Biological families can extend with many living generations, or not. Several of my nine first cousins live in Richmond and have children we call “the cousins” without getting into the specific genealogical terminology. My late mother’s first cousin and his wife took on the grandparent role and host us annually for Spring Break at their Florida condo. And my girls have “extra” sisters, unrelated girls who were adopted at the same time from the same orphanages. Perhaps in some small way those sisters fill in for the birth sisters who may or may not exist on the other side of the planet. I hope, through the options of DNA registries, my daughters may meet those sisters some day—if they choose to try. 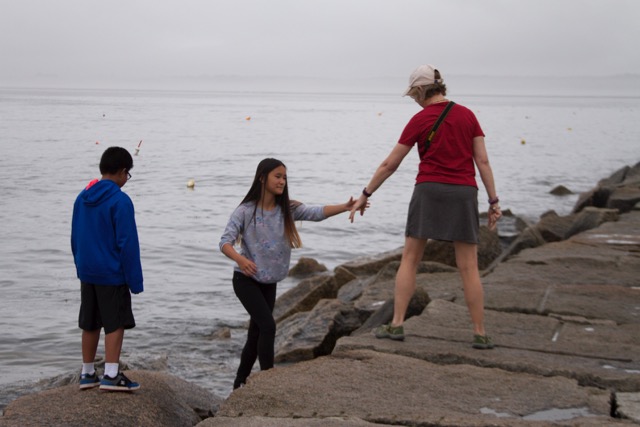 The author, her older daughter, and their friend.

Are my girls better off than if they’d remained in China? Probably. Most Americans enjoy a higher standard of living than our Chinese counterparts, and my family lives on the privileged end of that scale. But they didn’t get a say in this, although sometimes I wish they had. I can feel selfish for having brought them here so that I could create a family. Part of me wants to apologize for removing them from their heritage, even as I proffer Mandarin lessons and celebrate Lunar New Year. Maybe they’d rather have been adopted domestically and remained in their homeland, where everyone looks like them. But even in China, there would still be a chance that my teenage daughter could be the shortest guard on her basketball team.

Last night my fifth-grader was playing with four friends, and as I stuck my head in her room she looked up and beamed, “We’re playing Beanie Boos and we’re having adoption!” I love that she knew I’d be happy to hear that. If I hadn’t been in the middle of hosting my monthly Stitch & Bitch, I might have asked who had adopted whom, and how they all felt. Our family has been able to share those feelings with each other. There is joy in adoption, and there is sadness; in some ways my gain was their loss, and they know that. I’m grateful that adoption is no longer a secret families keep even from the very children whose lives have been altered by the process. We talk, we grieve, we remember, we celebrate. Of course I could make no secret of my return from the People’s Republic of China with a one-year-old, nor could I have possibly wished to. The event that made a child my daughter changed my life, and it let me have a family that isn’t so different from yours.

Maggi Tinsley is a freelance writer and communications consultant to nonprofits, when she’s not driving her two daughters hither and yon.