Once upon a midnight Eerie

In the Bottom on a recent Friday night, I waited on cobblestones for the Eerie Nights ghost tour to begin. Neon lights from surrounding bars contrasted with the blustery southern drawl of our tour guide as she called us to order…

In the Bottom on a recent Friday night, I waited on cobblestones for the Eerie Nights ghost tour to begin. Neon lights from surrounding bars contrasted with the blustery southern drawl of our tour guide as she called us to order. 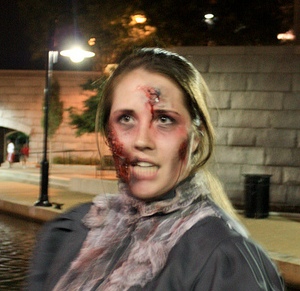 Katherine Anklam, our “ghoul guide” for the evening, had dressed the part. She wore a long, gray dress reminiscent of the antebellum period, its laces bloodied and torn. She eschewed the dewy, fresh-faced look in favor of makeup suggesting a slightly more undead state. Her demeanor was just cold and off-kilter enough to suit her image as a specter and to entertain, but she happily took questions and bantered with attendees as the evening progressed.

The tour is a brisk walk peppered with stories that are part ghostly, part good-old-fashioned-depressing-Richmond-history. The route begins at the 17th Street Farmers’ Market, stopping at Main Street Station, the Canal Walk, and Capitol Square before circling back to the starting point. 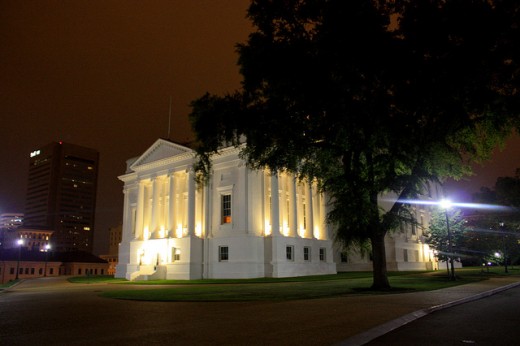 The Canal Walk is the topographical low point of the trip, where elements of Richmond’s dark past are appropriately highlighted. Capitol Square’s appearance is the most triumphant, the Capitol building itself such a stark, dazzling sight at night and the Governor’s Mansion not far behind it in elegance. The lesser-known Monumental Church is next, where tour-goers learn some facts that even the most seasoned Richmond history buffs might not know. And finally the pièce de résistance appears: the Church Hill train tunnel, famous for its disastrous 1925 cave-in. One of Richmond’s most tragic sites makes quite an impression on anyone, let alone those flushed from their long walk and ready for a grand finale. 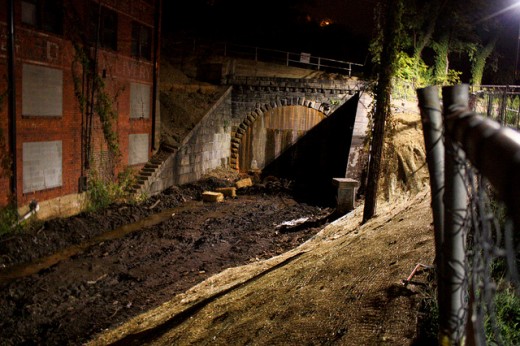 Though perfectly suitable for adults, parents should think twice about bringing small children. From drownings in the canal to slave rebellions, the subject matter covers the spectrum from grisly to heavy without missing a beat. And tales that might be pleasantly chilling to an 11th-grader will keep a six-year-old up all night with fear.

Having only been in business for two seasons, Eerie Nights is already a visible part of Shockoe Bottom’s nightlife. This year they’re collaborating with Creepy Hollow Scream Park, making appearances there and offering a discount at the haunted attraction for Eerie Nights tour-goers. Of Richmond’s potential to grow in the ghost tour market, Anklam said she would like to see area tour companies and attractions work together to put on bigger events.  Perhaps all that’s needed for Richmond to become known as a center for this type of tourism is a little teamwork and publicity.

Whatever the future holds for Eerie Nights, it is currently a breathless blast, hitting all the high points of the area’s haunted history. The tour will no doubt get you and yours in the perfect Halloween spirit.

For more on some similarly spooky events that are sure to get you into the Halloween mood, stop by the RVANews Halloween Guide.