Rumors Boutique just celebrated its third anniversary this past Sunday with a celebration at Hadad’s Lake. To honor this occasion, we spoke with co-owner Casey Longyear to take a closer look at the past three years, during which two recent graduates — with a dream of shirts, shoes, pants, etc. for all — became owners of one of Richmond’s most established (and beloved) thrift shops.

This past Sunday, Rumors Boutique celebrated its third anniversary at Hadad’s Lake with food, live music, dancing, and more than enough lake-side and water activities.

Owners and Virginia Commonwealth University alumnus, Casey Longyear and Marshe Wyche, both 25, say since Rumors first opened, they made the switch from “eclectic boutique to a trendy thrift shop” to remain open throughout the recession and help their customers shop happy.

True enough, Rumors experienced a rocky start and encountered financial challenges, but now Longyear and Wyche say they are able to give money to the community by recycling clothing, as they buy over 4,000 items per month from their clientele and donate part of their sales to local nonprofits weekly, all while aiming to connect local communities and support small businesses.

RVANews spoke with one of the notorious Rumors owners, Longyear, to take a closer look at the past three years, during which two recent graduates — with a dream of shirts, shoes, pants, etc. for all — became owners of one of Richmond’s most established (and beloved) thrift shops.

Where are you originally from?

I’m from Rappahannock County, near Skyline Drive. I went to a high school where I graduated with six other kids, and the nearest town that even had a mall was 45 minutes away. (Manassas, actually, where Marshe is from!)

What role would you say fashion has filled in your life?

It’s changed so much. I grew up wearing a uniform and changing into three or more outfits on uniform-free days at school. It was the one time you could express yourself through appearance.

I was raised on thrift store shopping, and poring over catalogues to see what was actually considered cool. I used to personalize everything I wore by sewing it in some way, whether by taking big shirts in or making skirts out of crazy sheets and pillowcases.

Getting dressed was always a big deal to me; I had to love what my outfit expressed. Now I love just looking in my closet and knowing that even though I sell most of my clothes at Rumors, I love every item I own. (Even though I’ve been known to sell the dress I’m wearing off of myself.)

How would you describe your relationship with your customers?

I identify a lot with our customers—it’s a pretty interesting relationship. We have customers we talk about music with, share traveling stories back and forth with, see out at bars or shows, or just look forward to seeing in or out of the store.

The line between friendship and customer gets blurred more often than not, and I like it like that. We are in the middle of our demographic, so we knew a lot of people who shopped with us before we opened, and I graduated from the fashion department so I can identify with a lot of students who come in too. 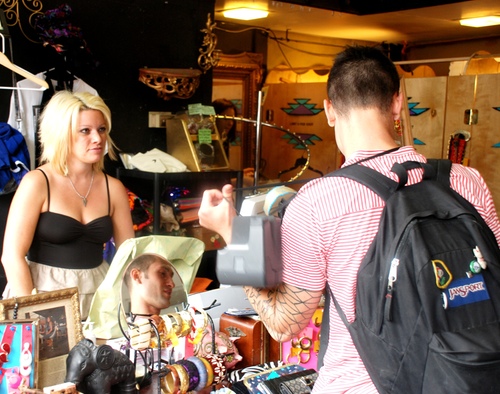 Who or what are some of your greatest inspirations?

My parents definitely—they both have run their own businesses and encouraged the idea of Rumors since it first popped into our heads. Once we came up with the idea we never doubted it, and for me that was largely because of how I was raised.

Kim Blankenship, the owner of Dominion Skateboards, where I used to work, was also a major inspiration. As was Marco-Marco, the designer I interned with, in (Los Angeles, California). They both showed me that I had this in me as long as I worked hard enough.

You’re a Virginia Commonwealth University graduate. What did you study there?

Fashion Merchandising, and I had a focus on Nonprofit Management, too.

When did you meet your business partner (Wyche)?

Actually, at a party at my first apartment—I didn’t meet her that night, but she had met my roommate and came back the next day to help clean up. We planned a lemonade stand outside of my apartment the next day and got on the news.

When did you have the idea to open up a boutique?

My last semester at VCU, I interned with a small boutique in Los Angeles. As soon as I got back, Marshe moved into my apartment with me, and we had a lot of friends coming and visiting from out of town. We wanted to show them what we loved about Richmond, and we found it hard to do but weren’t sure what to do about it.

The night of my graduation we threw the idea out there about opening a shop and said we’d give ourselves the summer to decide. I went traveling for the summer, and I texted Marshe from Barcelona saying, ‘Let’s do it,’ and she wrote back, ‘Great.’

What challenges, if any, did you anticipate and face when first starting your business?

Tons. When we first started planning this, we thought we’d need a huge loan, and we didn’t get accepted for anything. At one point, I was promised a $5,000 loan and on my way to sign the papers, they called and canceled, saying we were too big of a risk. No one seemed to totally believe in us until we actually opened our doors.

Friends helped a lot of course, getting the store ready. Even finding a location was really hard, we didn’t get in our building until three weeks before we wanted to open. Everything has happened in a perfect order to learn from.

How do you and Wyche collaborate for work?

Our strengths and weaknesses complement each other so well. Right after I graduated we planned a fashion show together, and that’s when we saw that when one of us is stressed, the other isn’t. We literally each do a little bit of everything, and we know exactly when the other needs a break or when the other wants to start a new project.

Can you explain the crossover from a boutique to a thrift store?

I originally wanted to bring something totally new to Richmond — independent lines that weren’t available anywhere nearby, other than New York or Los Angeles. We were the first store in the states to carry over a dozen lines, from Iceland to Spain to South Africa.

However, we didn’t mark clothing up enough to even pay our bills and it was still too expensive to be a store located near campus. Marshe and I both had a ton of clothes in all different sizes and styles, so we started bringing them in to sell as well. Then friends who wanted to support us but couldn’t shop with us started donated us clothing.

Finally, December 2008 was a MISERABLE selling month and we knew we couldn’t keep doing it. We decided randomly one day to make the switch, and made the transformation in three days. 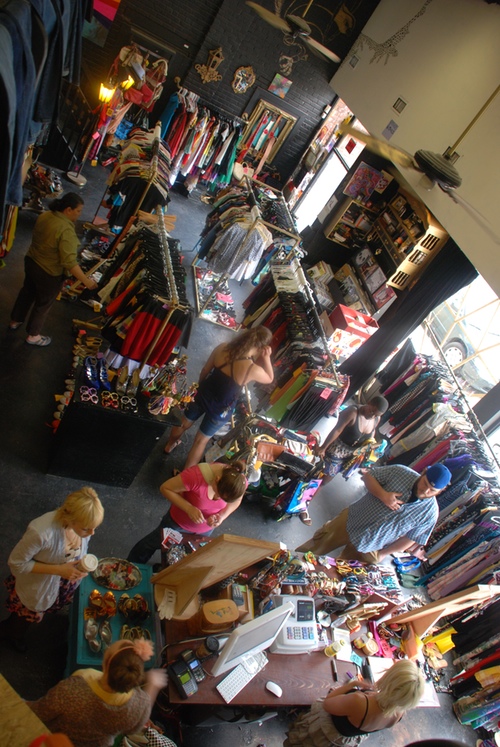 Now, you buy over 4,000 items per month and donate partial sales to nonprofits. What are some of those nonprofits?

We do weekly events called Shop for a Reason that I actually came up with when we were still a ‘new’ boutique about two years ago when the recession was first hitting. We thought it would not only bring awareness to nonprofits that needed help, but also make customers not feel guilty about spending.

We sometimes contact nonprofits in the community that we think might need help, and customers often ask us if they can book a date for groups they work with or for projects they want to complete. We also donate money to two nonprofits a month, giving ten cents for every bag a customer doesn’t take.

Can you explain how you network with other local business?

We try to be as community involved as we possibly have time for. We formed our business out of a love for the community, so it makes sense we would want to promote business at other local stores and book events at local bars and galleries.

I recently coordinated a fashion show as a fundraiser for Gallery5, and Marshe has booked a few shows there. We book dance parties at Empire, where we actually wrote a decent amount of our business plan, and we send people to other shops whenever we hear what they’re looking for or know what their style is.

How about other cities, states and even countries—have you and Wyche reached out to other businesses that have similar goals?

Always, whenever we travel we love meeting other business owners. This spring I went thrifting in Los Angeles and met so many awesome individuals who own used clothing shops, and we just got back from Puerto Rico where we met the owner of a vintage shop there who was so inspiring. We always document it and blog it, we love being able to help promote their businesses.

How do you utilize social networking online?

Facebook and Twitter and blogging have been life savers for so many small and large businesses. We have had basically no money to advertise with and these mediums allowed us to get ourselves out there, show what we have and our personalities.

Do you have any other jobs or volunteer positions?

Every summer I work as a counselor at the VCU Art Intensive Program, which is a college preparatory art program for high school students.

When we first opened, we each held quite a few jobs. I worked the door at some bars downtown so I could be in the store during the day, and Marshe cooked at some breakfast spots so she could be in Rumors in the evening. I did tons of one day gigs on craigslist each week too. That’s how we kept our doors open the first year and a half. Oh, and my car got totaled and rather than getting a new car, the money we got from that paid rent, too.

We both volunteer at the Firehouse Theater and at other art events around the city, but lately we haven’t been able to donate as much time as we’d like. Our Shop for a Reasons let us feel a little more involved.

For those of you interested, take a look at Longyear’s top picks for music, books, night spots and more in Richmond and beyond…

Books/magazines
I just read The Road by Cormac McCarthy and If You Have to Cry, Go Outside by Kelly Cutrone, and totally recommend both.

Food
Brunch at the new 821 Cafe, lunch at KubaKuba, and dinner and wine at Edo’s Squid.

Online
RVAblogs.com — it’s amazing our city has such a great resource!

Night spots
The roof of Havana 59, shows at Strange Matter or Plaza Bowl.

For those working on their fitness
Hadad’s Lake! We just had our third anniversary party at this family-run water park that is 10 minutes outside of the city and my arms and abs hurt from going off the rope swing so many times, and Marshe says she has a dance hang over! Also, ladies night at the Southside roller rink.

Rumors Boutique is located at 404 N. Harrison Street. They buy clothing between the hours of 11am and 5pm Monday through Friday, and from noon to 4pm on Saturday. To learn more about them, stop by their website, follow them on Twitter, or check out their Facebook page.