Covered by a white sheet, or zipped tight in a black body bag, these forms stretched out on cold slabs of metal are artifacts of local murders, suicides, and deadly accidents.

At a time in the day when thousands are either grabbing their morning coffee or yelling at the traffic on I-64 on their way to the office, one man is in charge of another kind of office–the lifeless kind.

“I’m responsible for the morgue operations,” he said with a bubbly Arkansas accent inside his deliberately dim first floor office. With papers scattered across his desk, framed degrees on the wall, his office is a typical one. Aside from a tabletop microscope, there’s nothing about either Dr. Whaley or his office that suggests he cuts open and examines corpses for a living. But he does.

While many are nauseated by the mere thought of being next to a carcass, let alone dissecting one, Dr. Whaley is not only comfortable doing so, he is the epitome of a man who enjoys his job.

“It’s a little bit of everything,” he said about his line of work, smiling while talking about it. From biology, physics, to detective work, a medical examiner,1 said Whaley, is an “advocate for the deceased.” 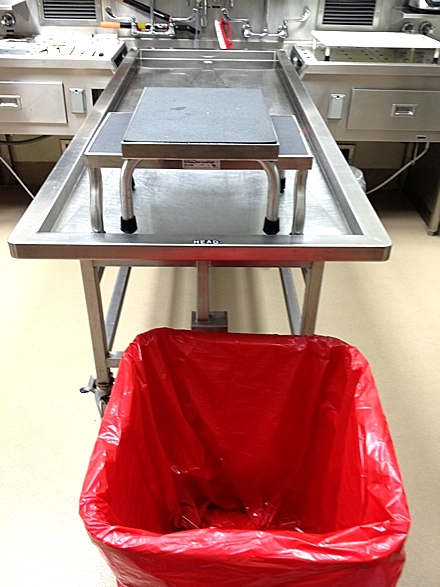 On this particular morning, there are three autopsies that need to be done. He will cut a Y-shaped incision into each body that runs from either shoulder down to the belly button. “Everything comes out,” said Whaley. The examiner investigates “organ by organ” as well as weighs and records bodily details. Typically, each autopsy lasts two hours.2 Sometimes Whaley’s line of work takes him out of the office.

“We’ll go to crime scenes when it’s something out of the ordinary,” he said. For instance, a body found in the woods is something that necessitates a visit to examine surroundings and evidence to better discern cause of death.3 Such a field trip would be macabre to most, but not Whaley. “Reconstructing the scene is the fun part,” he said. That’s when all of his skills and experience merge as he brings criminal secrets to light. But his work isn’t limited to that.

“I have a suicide almost every day,” said Whaley. When the family of a suicide wants details of the self-inflicted death, it’s often Whaley that relays that information. He also tells families about illnesses unrelated to death. For example, if he discovers undiagnosed cancer in a murder victim, Whaley will discloses that information to a family for their medical records.

He studied medicine at the University of Arkansas and, for a time, intended to be a pediatrician. Pediatrics has carried into his forensic pathology work where he, rather tragically, often encounters children. “Fortunately, only about 10 percent of my kid cases are homicides.”

“You can’t be emotionally attached”

In his career, Whaley has seen the remains of a man baled among cardboard and one crushed by an elevator. Being so close to corpses day in, day out would probably sicken most of us, but it’s when you consider the tragic human subplots to these deaths–chronic child abuse, horrific murder, fatal accidents–does Whaley’s job become heartbreaking. “You can’t be emotionally attached,” he says, it would be emotionally crippling. But there’s another reason for Whaley’s dispassion. “You’ll miss something.”

For every crime scene, said Whaley, there are in fact two crime scenes. The first is what police concern themselves with: the actual location that’s rife with evidence and clues. The second scene is the body.

Whether an evident gunshot, or a more surreptitious form of foul play, it’s Whaley’s job to determine how a person died. “I’m an advocate for the deceased,” he said. While no one can stand in for a victim at a murder trial, Whaley is the apt surrogate: he tells the court “what the deceased would say.”

The Central Virginia jurisdiction stretches beyond Richmond to as far as Halifax, 120 miles away. The deceased arrive at 400 E. Jackson street by way of a concealed loading bay at the building’s rear. Provided no atypical number of victims (the most Whaley has contended with at one time was 14), autopsies and subsequent reports are completed within 48 hours.4 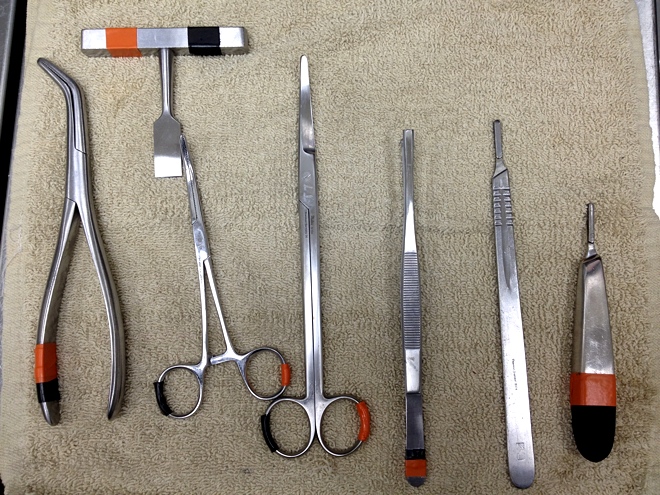 The instruments used by medical examiners are of the standard surgical variety: scalpels, forceps, and scissors. At the edge of each autopsy table are large cutters, used by examiners to sever ribs. Medical supply companies will sell these rib-specific cutters for over $100, said Whaley. The ones in the morgue were purchased from a local hardware store for less than $30. “Most things for an autopsy you need you can get at Staples or Home Depot.”

The morgue is not a creepy place. It’s quite friendly. During our tour, Whaley greets his co-workers with a good morning and a smile. The area is not steeped in spookiness, but instead sterility and organization. The air is chilly, but not noxious. It’s a cross between a large surgery room and a doctor’s office. Aside from the dead people, the morgue is really pretty ordinary. Especially to Whaley’s two sons.

While Whaley does not bring his sons into the morgue, he doesn’t hide from them what he does for a living (although, he will hide the gory details). “They think it’s normal to have a plaster skull in the house,” he said. When cases make the news, the boys will often ask their father if he has seen the involved victim (Whaley’s wife, however, has neither the interest nor the stomach for these work-related conversations). Whaley and his children have even developed code when referring to aspects of Whaley’s job in public. The morgue, for instance, is referred to as “the clinic” when father and sons are out and about.

Despite dealing with death on a daily basis, Whaley and his family live a happy life in Richmond. In addition to his work as a medical examiner, Whaley is also an adjunct professor in VCU’s Forensic Science Department. He said he hopes to stay in Richmond for years to come. “I plan on retiring here.”