Stephanie Ganz and Susan Howson attended Ipanema’s 2015 Vegetarian Beer Dinner, at which there was much beer and even more dinner. Everyone got more and more interesting as the night went on. Ipanema Cafe has been doing their Beer Dinner for several years now, but this year’s was the first that was produced in collaboration with just one brewery. Ardent Craft Ales held the honors, pairing each course with one of their finest brews–some of the courses actually involved some of the ingredients used to make the finest brews!

We had intentions to put an intelligent piece together, but those intentions dissolved into beer, and the notes we took became more and more ridiculous.

Yet here they are, turned into coherent sentences, and presented to you an accurate portrayal of how much fun you can have at Ipanema’s Beer Dinner.

A blend of pickled deliciousness and “potato chips” that feel more like crackers (which was 100% fine with me). Turns out huge pickled carrot slices are the only thing I want to eat for the rest of my life. I eat several and some string beans. Our booth mates, Dylan and Brian (who used to have a street fashion photo column with RVANews, you may remember!) eat like adorable birds, gently sipping on their beer.

We begin by politely bothering Brian and Dylan to tell us everything about what they do all day for work. We don’t know why we’re so interested in this, but maybe it’s because we don’t hang out as much as we want to due to an overabundance of work to do, so when we do hang, we insist on talking about everyone’s jobs. (Dylan is in education and we all have an intelligent chat about SOLs).

We forget to try not to be annoying. This will be a recurring problem.

A tom kha soup with mushrooms and acidulated barley for sourness instead of lime. Chef Will Wienckowski talks about how he got to use a lot of the same materials they use for making beer. Stephanie appears to be listening intently so I attempt to appear that way also, even though mostly I am sucking down soup, because it is possibly the best soup I have ever tasted. 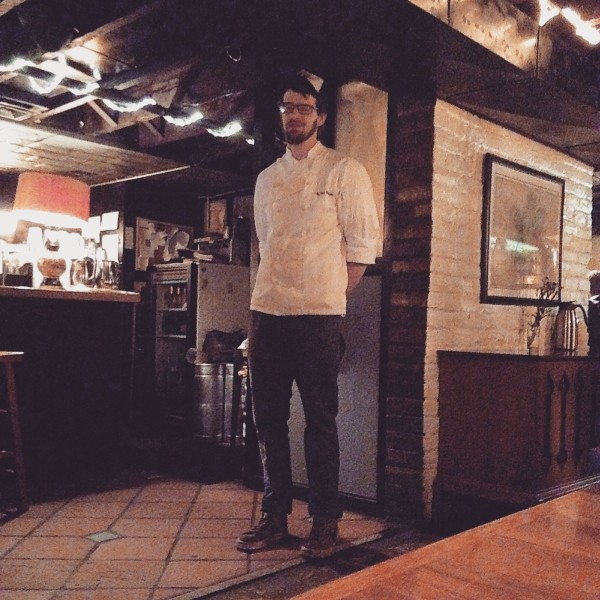 Everyone sweetly ignores how I am guzzling soup like my insides are a house on fire. It is sour and creamy without being CREAMY, you know? The mushrooms are perfect round umami pockets, and the Honey Ginger ale is a sweet and tangy treat that goes perfectly with it.

Stephanie starts to talk about her Twitter handle (@onioncloute) and we have his conversation for awhile:

Me: “Oh, it’s ‘cloot-ay?’ I always pronounced it ‘clout’ in my head.”
Her: “Nope, clooooooooot-ay.”
Me: “Onion cloooot-ay.”
Her: “Yeah, not clout, although I think you can also say clout if you’re an American.

Here is where Stephanie begins to explain what “cloute” means–a story that begins with an onion studded with something or other and ends with “And the irony is that I don’t even LIKE béchamel!” Or something like that. I can’t pay attention because midway through her monologue I swallow one of the soup’s peppers, and it burns a distinct line through my lips, tongue, throat, esophagus, and stomach like Sherman marching through Georgia.

I’m sure it is a charming story, though.

This course seems to last forever, while my insides turn to an actual house afire and the Honey Ginger isn’t helping. Well, it’s helping, if you know what I mean. I’m crying through my pepper haze but my attitude is more and more upbeat. The general din of the room rises, warmly.

While I drink water, Brian and Dylan have their own bouts with the pepper, which seals our best friendship just like I had hoped something would. Stephanie tells us all about how she got to speak at two food-related things, which means she got to wear two dresses in one week.

Halfway full and halfway buzzed, we are all very proud of her. 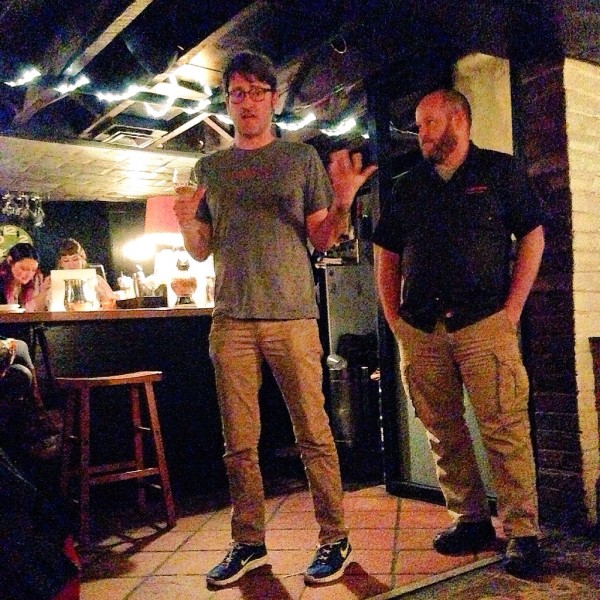 Tom and Kevin from Ardent, who are stoked at how the evening is going.

Of course, I’m on my third drink, so my brain forgets to tell me this. I eat the entire thing, cheerfully.

Between mouthfuls, Stephanie and I continue to regale poor Dylan and Brian, this time with TMI tales of pregnancy. As a method of self-preservation, I erase these details from my memory as soon as they are said, which I will be grateful for later. Here’s hoping Dylan and Brian are able to do the same.

This course involves barley grits, which are sandier than corn grits and not entirely my favorite thing in the world, although the mushrooms and bok choy involved are perfectly done. I pretend I am a chef-judge on the Food Network’s Chopped and throw around some terms like “They need to balance the acidity with some sweetness,” but really I have no idea what I’m talking about and I eat most of it anyway.1 I will go on to remember it fondly. The sweet potato/sage course is a hard act to follow.

The beer is much too heavy for me, so I only have a sip. That’s a good thing, as by this point I’m yelling “YOU MUST COME WORK FOR US” across the table at Brian, who may or may not be texting Dylan under the table with just the bomb and gun emojis. I do not consider how a spur-of-the-moment job offer will fly with the people who actually make financial decisions at the office.

Stephanie’s busy telling us all a story about how she makes mix tapes in the most laborious way possible (i.e. actual tapes), and Brian actually gives her tips on how to make it more laborious. At one point in her life, Stephanie put a track from the Midnight in the Garden of Good and Evil soundtrack (featuring Kevin Spacey on vocals), and her story ends in “Trying to make out? Here’s some Kevin Spacey for you!” which I find so charming that I instantly make a note.

A mango and fennel salad, thank god, although I do some more Chopped judge posturing and talk about how I wish there was less “liquid” involved. The beer is more drinkable for me in this round, so I’ve forgotten that salads are “dressed” and not just “liquided.” 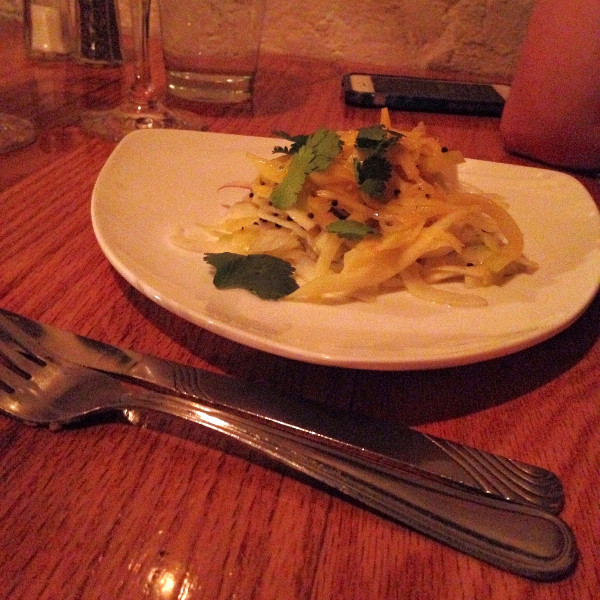 Put fruit in salads, everyone!

Either way, the food has been awfully brown since the pickle round, so I am glad to gorge on fruits and vegetables. I am unable to gorge, though, as my stomach has become as round and cherubic as a smooth, leather-jacket-clad beach ball.

Perhaps Brian and Dylan try to get a word in (rookie mistake), but we pull our age card again and attempt to talk about kids and marriages, until Stephanie announces that “This marriage counseling session is OVER.”

At one point, I lose track of the thread of conversation, such as it is, and tune back in to hear Stephanie proclaim, “No, I mean, I do like other food writers.” I assure her I despise anyone else who even attempts the job, although I think I really mean that I think she is great.

This beer is too drinkable. I’ve eaten too much. We talk about Jay from Deep Groove for awhile, and how he is a lovable man, and then it’s back to mixtapes, which, Stephanie believes, there should be an app for.

Then, obviously, it’s time for an En Vogue breakout session–in that I break out into “Never Gonna Get It” and she approves.

I am determined just to try. But, fellow man, this is one of the most delicious things I have ever tasted. A beer-caramel sauce down the middle, chocolate-rye cookie-like-bread on the sandwich, and rye ice cream. It sounds so not-good! But it’s an incredible sweet-savory mixture for caraway lovers everywhere. 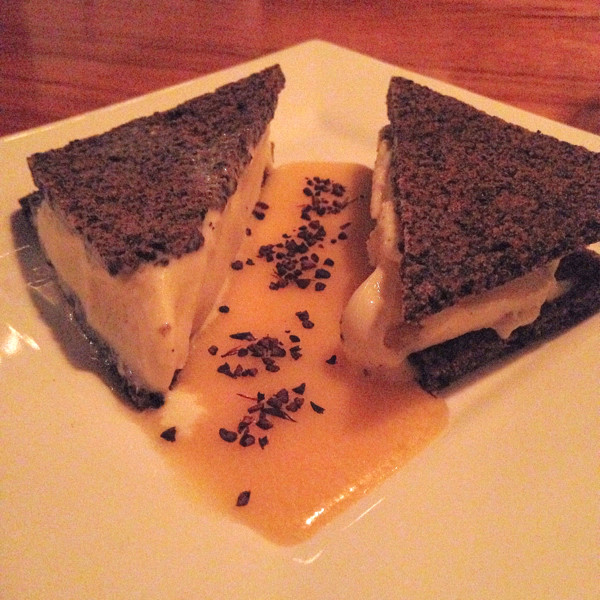 I look down and half of this enormous dessert is gone. It’s truly time to stop, I am uncomfortable. I can’t do more than look at the beer, which is syrupy and sweet, as Stephanie says, “IMPORTANT QUESTION!” At which we all look up. “Should I get bangs?”

And then we spend too much time sitting at the booth after everyone else has left, talking about movies. That’s partly because we were unable to rise from our seats, and partly because our company was so interesting and wonderful.

Thanks to Ipanema and Ardent for a delicious experience. We will be back next year, if you let us.