GWAR, Me, and the Onrushing Grip of Death: Part 29

We’d spent three years coming up with the greatest band in rock-and-roll history and become something of a small town success story in the process. But finally the word was getting out on a national level.

Sorry about missing an episode, but we have been pretty damn busy. After spending most of the summer sacking European venues and then wandering battlefields, we decided it was time to come home and get our shit together. Our new album, “Bloody Pit of Horror” is out November 9th, so there was much evil afoot — mostly getting settled in our new Slave Pit and getting ready for the new “Bloody Tour of Horror”, which will span three and a half months and shall see us blow load in weird places like Australia and New Zealand. In fact I am on it already! But there is plenty other cool stuff coming up as the two-year long GWAR 25th Anniversary begins to lurch towards the final stretch, and the finish line beyond (which is sometime early next year, I think). First off, we are web-casting live from Milwaukee our first pay-per-view GWAR concert event. Check gwar.net for details. And even crazier, the impishly cute Jimmy Fallon is letting us on his show October 28th! And this won’t be an Oderus panel-appearance; this will be the whole fucking band, playing the opening track, “Zombies March” (also soon to be a video from Fangoria) from the latest and devastatingly sick new album that, yes, despite my constant hypocritical accusations of Rob Zombie, the title of is stolen from a classic Italian horror film (of the same name).

And it really does sound sick. We tuned down to the point where it sounds like the guitars are throwing up. But that’s not the only evidence of our changing universe. Things have changed quite a bit since I started this writing thing almost a year and a half ago. At that point I re-dedicated myself to all things GWAR and pledged to make the next two years the greatest and perhaps last attempt yet at getting this band out of the underground and into the mainstream, (at least the part where you make money) which seems to be the best place to give these old road-dogs a shot at a health and retirement plan. And so far I would have to say we were doing pretty well — Red Eye, Fallon, cracking the Billboard Top 100 — these are all indications that the cult of GWAR is growing every day. But can we finally get this beast out of it’s shit-smeared lair and down to the bus stop? Only my hairdresser knows for sure.

It certainly doesn’t seem like it after playing a gig like last night’s. We should have known we were in trouble as soon as we pulled up. I asked a local crew member where we could park our bus and was informed that he “was not my Dad.” This enraged me so much that I followed him into the club and demanded satisfaction, at which point he denied everything. I huffed and puffed, and then fucked off back to the bus, hurling myself into my bunk in a spasm of demonstrative pique. When I later returned to the club I discovered it was more a flashy, trashy disco shithole, than a beer-drenched, rock-and-roll shithole, and that made it even worse. There was so little room on stage that we basically had to cut half the show, and getting ready for it was even worse. The only dressing area available was located at the bottom of a 30-foot spiral staircase which emptied out into a small maze of useless rooms, all too small and cluttered to have any function whatsoever. Everywhere you looked you saw nothing but boxes of ashtrays, file cabinets filled with old contracts, a confusing array of pipes and ventilation vents, and finally an alarming amount of rat traps. Our “dressing room” was a tiny chamber filled with jit-smeared couches and an ancient collection of old show posters, which had been defaced with every dripping penis and gay remark which could be Sharpied onto them. Everything was dirty, shabby, and bad, yet somehow the management had the balls to have put up posters imploring the bands to “keep it nice”.

Fuck it! We rocked anyway! And now, back to the continuing adventure we can safely say is called… 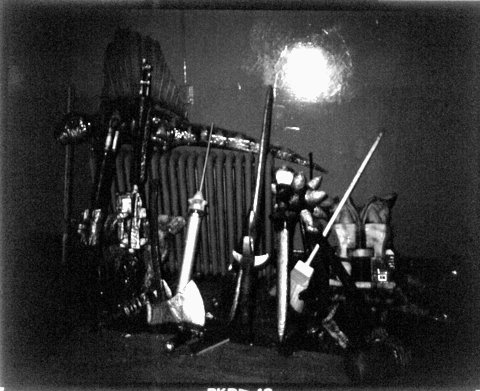 Slave Pit weapons collection (and Dimetridon), circa 1987. If you look
closely you can see someone stuck a broom in there.

It was 1987. We were firmly entrenched in the Bush years and the mood was one of nervous expectancy as waited for whatever he was up to with his C.I.A. cronies to actually happen. We’d spent three years coming up with the greatest band in rock-and-roll history and become something of a small town success story in the process. But finally the word was getting out on a national level. Not only was El Duce spreading tall tales about this band from Antarctica, not only were the folks at SST checking out the GWAR videos the AlterNatives had brought with them, but then out of nowhere Thrasher magazine published a photo of a GWAR concert along with the totally false claim that we had started a riot in our hometown.*

There was Oderus, and GWAR Woman, and The Sexecutioner in a grainy black and white photo showing a scene of confusing carnage…in an international magazine that’s circulation was in the hundreds of thousands. It was the first major press event for GWAR and years later would be revealed as one of the biggest ways that people had come to know of GWAR.

But there were other people talking about GWAR. My friend Rebby Sharpe (yeah, I am not really going to be using the nickname thing anymore unless I really need to) had been talking about us to her friend Kramer in New York about her weird friends and their crazy band. Kramer ran a obscure yet pertinent art-rock label called Shimmy-disc. He was best known for his work with Ann Magnuson and their band Bongwater. Ann was also doing a band called Vulcan Death Grip that had a vague GWAR-ness to it, and she would go on to later appear in that movie Small Soldiers. For a while, she was the most famous person we knew.

Rebby told me to send Kramer a video. I did. More on that later.

We spent the first half of the year settling into our new Slave Pit, the old Joy Massage building located in what is now the Aladdin’s Pizza building …jeez, how much can one building take? To be Richmond’s premiere jit-parlor, then home to GWAR, and finally to deliver such delicious food? Well, that explains why they sometimes tear down what appear to be perfectly good buildings. Makes you wonder just how long it will be before the scythe of time chops down the reign of that most excellent edifice and harborer of all things vile, 801 W. Broad, our first true post-Dairy Slave Pit.

We thought we were pretty cool. We had the “golden battle barge”, which we drove around town on various errands, usually involving weed or pussy. We’d park it on Broad Street or dump it over in Oregon Hill, then walk to our fort, our beloved Slave Pit. Our crimson-walled paradise squatted a floor above the throb of Richmond life, and we observed numerous beatings from it’s windows. One night while we were doing just that, I got the great idea of pushing a huge plaster skull out the window where it plummeted to the earth and exploded on the sidewalk, right next to a group of late-night revelers who were more than a little pissed but couldn’t seem to figure out where it had come from.

There were at least five bars on the block so there was never a lack of action. Bands played pretty much every night at Rockitz. Every year V.C.U. offered us a whole new crop of “hotties”, and we were still young enough to know their names. We were already local legends and were smug and conceited about it. I was rapidly ballooning into a loud-mouthed egomaniac, and why not? We were young and snotty and fresh out of the school of Hardcore, which we were already getting sick of. We had to come up with alternatives. That’s why we created GWAR. Because we were sick of everything else.

And it was really a great idea. That’s why so many amazingly talented people were drawn to it. So much so that while they did all the work I could fuck off and have fun with Richmond as my personal pussy-hunting ground. And hunting was good!

I remember encountering the lovely “Meow-Meow” at the Village (the old Village) in the early afternoon, bringing her over to visit the Slave Pit, and fucking her by nightfall. Two days later I was blowing her off as I banged her friend in the stairwell.

I was shameless and without class. We referred to women as “load barges”, who existed for the sole purpose of sucking, jacking, and fucking us, and then allowing us to shoot “load” all over them, which they, as “barges”, were obliged to accept.

We had our own Slave Pit vernacular and code words and slang for everything. Pot was “wizzy”, or “wisdom”, you were a “Ramses” if you held the bong for too long (because the Egyptian Pharaohs had those beards that looked like bongs stuck to their chins). Beers were “glugs”, food was “glop”. And of course there was the word that eventually found its way into the Urban Dictionary, “bohab”. From the beginning a bohab was a person that was HABitually BOring. It came from the proto-hab, the one called Bob the Slob, also called Bo-Hab the Slow-Hab. He was a friend of ours who used to come over and lick envelopes and tragically drowned when he years later drove his car into a swollen stream during a hurricane. He was a lot older than us but was a really nice guy who always shared his “wizzy”. So the term was an affectionate one and never was meant to be a negative title, indeed some of our greatest friends and supporters are pure bohabs, or “habs” as it was eventually shortened to. Indeed, we all have a bit of the hab about us — “bohabing” (sucking up to your betters) is something we all both indulge in and despise about ourselves.

I was still living on Spine Street with The Weedwolf (keeping the old nicknames in cases where they are funny) and Mantis (Scott Krahl). One night I was dreaming about New York City. I had never been there before and was driving around the city in a taxicab. I remember having to shit. Suddenly the phone rang, shattering my poo-smeared reverie. A series of hoarse shouts from the other room confirmed the call was for me.

More muttering. Shuffling sounds. For a moment I think I can go back to sleep. But then…

“Some dude named Kramer. Wants you to go to New York and record an album.”

IN TWO WEEKS: Noise! New York on two dollars a day! Growing dissension at home, growing list of gigs on the calendar — all this and much, much, more of the same in the next episode of GWAR, Me, and the On-rushing Grip of Death, Part 30…

“Everybody Hates the New Album”

*I believe this was somebody mushing together the Schafer Court GWAR and Death Piggy shows. Death Piggy had caused a near-riot during our notorious “Pie-Fight”show.