GWAR, Me, and the Onrushing Grip of Death: Part 27

So we had assembled what I considered to be the finest bunch of musicians that the Richmond punk scene could muster up, and he band was a actually sounding like a band, at least until the point when I opened up my fat mouth. 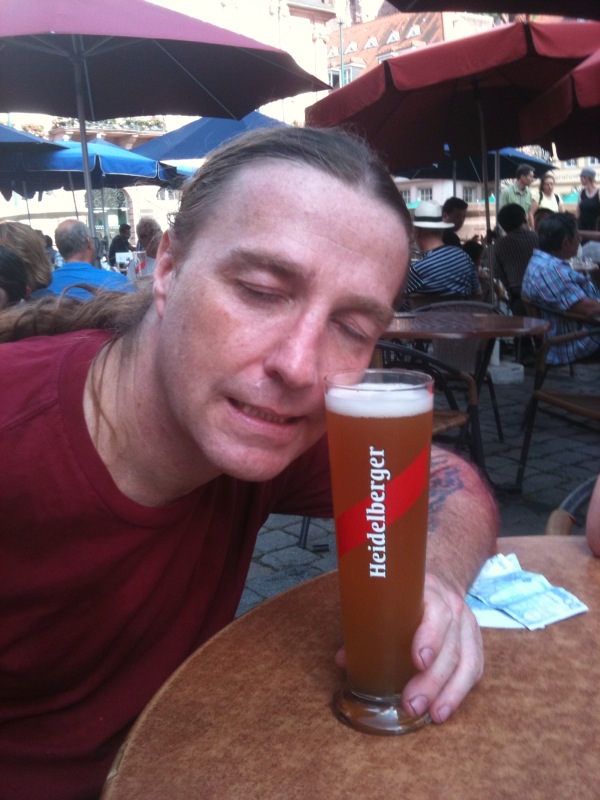 Ahhh…the beer of Europe…in Europe. We have just completed not one but two swings through Europe, playing tons of festivals and guzzling gallons (I mean liters) of beer. The halfway point of our completely self-promoting two-year long 25th anniversary “slay-a-bration” has been reached, and everything is looking great. The new album, “Bloody Pit of Horror” is in the can and ready to be released on November 9th. The longest tour in our history, including our first dates in New Zealand and Australia, is starting in under a month, and somehow I have found enough time to deliver another episode of…

GWAR, Me, and the Onrushing Grip of Death” Part 27
“The Golden Battle Barge”

So we had assembled what I considered to be the finest bunch of musicians that the Richmond punk scene could muster up, and because nobody else wanted the job, I stayed at lead singer. We had all settled into the task at hand and began practicing in Spewy’s basement. Up until that point GWAR only had a few songs: “Üaintshit”, “Rock and Roll Party Town”, “GWAR Theme” and a couple of others. And the way we played and practiced was every bit as haphazard as the way we wrote music. But when we locked ourselves in Spewy’s basement an amazing thing happened… we actually started writing some good music. “I’m in Love With a Dead Dog” was the first fully realized composition, and more were soon to follow. The band was a actually sounding like a band, at least until the point when I opened up my fat mouth.

The art department was busy throwing down as we established new characters to fit our new line-up. Up until that point the look of the characters was pretty much decided by whatever costume pieces you grabbed, first-come, first serve, and our revolving door line-up had created all kinds of obscure GWAR-iors that would be lost to history without my pot-addled memories. Hans and Stephan Orifice, Corneilius Carnage, the Slutman Brothers, the Executioner, all were destined for the trash-heap in the great re-making of GWAR that occurred in the first half of 1987.

The Bishop inherited the bent-I-Beam helmet, a beautiful beaten copper breastplate fashioned by the Mantis, and a Roman-style skirt that remains the look of the character to this day. As much as he wanted to be called “Squidman Shitsucker”, we wouldn’t let him, and he became “Beefcake the Mighty”. Wherever we could, we based the characters on some element of the real person’s personality, and The Bishop’s natural girth lent itself to the name “Beefcake the Mighty”. Spewy was a vegetarian, known for his hideous farts, so in GWAR he became “Flattus Maximus”. Hoseby was a very low-key person with a poker-face from hell, and therefore became the equally enigmatic “Nippleus Erecticus”, a character with no discernible personality whatsoever. Thuglas stepped into the “Jaws of Death” and became Balsac, which was fine with us as the bear-trap jaws completely obscured his face, his bald spot, and the fact that he was considerably older than the rest of us.

The back-up characters had been coming together for the preceding couple of years and finally crystallized as Sexy became “The Sexecutioner”. Our old friend Spike had been playing “the Executioner” before then and was basically Oderus’s helper in the killing and molesting of things. But Spike had moved on and Sexy took it over, adding an “S” to the front of the word – and thus “The Sexecutioner”was born. Hoseby’s girlfriend had been dancing for another band he was in — the infamous MuddHelmut — so it seemed natural for her to take over duties as GWAR Woman, who at this point still didn’t have a name. Once you added the Slaves, and the various villains and victims they also played, we had a the beginnings of our mythos, a “proto-pantheon” if you will, though at that point we had no idea just how big our little fantasy world would become.

Sleazy had pretty much become the leader in the Slave Pit and right off the bat he had a dramatic effect on the evolution of our look. Believe it or not, we didn’t always spew; in fact after the notorious “hobby horse” incident and the banning from D.C. we had received because of it, we hadn’t done shit with blood since then. But Sleazy saw a way to do it that would look great and wouldn’t end up with us paying for ruined monitors. He had access to this stuff called “carrageenan”, which was a seaweed extract which was usually used to thicken dairy products. It was tasteless and colorless and when mixed with food-dye produced an amazingly realistic blood that stuck to stuff but would dry and flake off without fouling the surface. It was a huge improvement over the karo syrup we had been using. But that was just one of the several huge improvements that Sleazy brought to the table.

Sleazy also introduced us to latex rubber and all of its joys. He had created the amazing “Mutant Cockroach” for the first Shafer Court show, and soon had applied the technology to all kinds of GWAR props. Sexy took the ball and ran with it and had soon built the first full latex mask for the Sexecutioner. It wasn’t particularly sophisticated, in fact you could have gotten the same effect by wearing raw meat on your face, but it was a step in the right direction. I still didn’t have the full Oderus mask-thing happening, but it wasn’t far-off. I wanted to wait and see if Sexy could survive an entire show with that thing on his head before I made one for myself. So at that point I would take raw latex and paint it all over my face, and then as it dried texture it up with cigarette butts, corn flakes, and cotton balls, then hand paint it for the show. Time allowing, I would do the same thing on my ass as well. It looked great but would usually fall off halfway through the first song as I began to sweat profusely.

Sleazy was also pioneering other areas that were vital. He created an effect where a tech dude ran up on stage and tried to help Oderus with his microphone. He reached out with both hands for the mike, which Oderus grabbed and pulled away from him, ripping one of the dude’s arms off in the process. Feigning agony, the character would squeeze the hot-water bottle which was kept under his armpit. Dyed water-blood shot a good three feet! Now, in these days of us blasting festival crowds with double Biledrivers, that seems like a pretty humble effort, but back then it was fucking mind-blowing!

But he wasn’t done yet…the next thing he did was get his hands on some old fire extinguishers which he filled with water and dye. Before the shows we would find whatever gas station had an air pump and charge the tanks, then hook them up to the hoses in the costumes, and our famous “projectile spew”, destined to soak millions, was born!

So we had a band, we had an art department, and we had a killer studio. But unless we wanted to be destined as Richmond’s ultimate bar band, we needed a better way to get around than borrowing Spewy’s van. So we went in search of transportation, and found it in Flat Rock, Virginia. There Spewy knew an old man, who went by the moniker of “The Old Man”, with a huge lot full of old school buses for sale. Not having any cash, we instituted a system of “dues” where everybody was expected to kick in 20 bucks a month…that’s right, back in the old days you actually had to pay to be in GWAR!

So we scrimped and saved and stole and pilfered until we had the thousand bucks we needed to buy our dream vehicle. “The Golden Battle Barge” (from Moorcocks “Elric” series) became our tour bus, after a few modifications. We ripped out most of the seats and piled a bunch of moldy mattresses and cushions on the floor. This was “the Pea Pit”, and everybody slept, ate, jacked-off, and fucked in alarming proximity to each other. Right behind that was “The Squirrel Cage””, where we would just throw the stinky costumes in a huge pile after the show. And at the very back was the “Urine Cone”, a funnel attached to a tube that would deliver your watery piss to the surface of the rushing highway below. Some random graffiti, a huge GWAR mojo, and a pair of steer horns glued to the roof completed the picture.

I was pretty stoked. Losing our band and our best artist had been a tremendous setback, but we had stuck it out. We knew that the idea of GWAR was too good to let it die, and we really didn’t have a lot going on besides it. Death Piggy was pretty much over, my painting career wasn’t going anywhere, and working construction was looking more and more like my future. GWAR was maybe our last chance to do something awesome with our lives. And now we had a band, a bus, and a studio, everything we needed. It was time — time to hit the road, time to ram GWAR down the countries throat…it was TIME FOR DEATH…

In two weeks, El Duce and the Mentors! Shady managers shooting up in stairwells! Even shadier managers smoking sheet rock and insisting it got them high! All this, and …this…in the next fudge-packed episode that shall be called…