GWAR, Me, and the Onrushing Grip of Death: Part 26

Dave Brockie is back and better than ever with the latest installment in the exciting and sordid of how GWAR came to be…well…GWAR. This time we hear about how he lured “the perfect musician for the Richmond scene” into the fold. Plus there’s mention of a dragon… oh just read it. 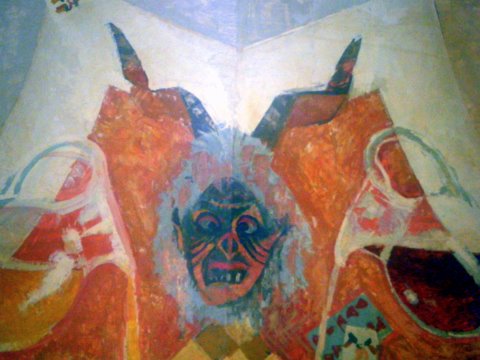 (Here’s a picture I got of a painting on the roof of the BeergaBurgerba– oh fuck it…anyway Hitler used to hang out here, with this guy checking out the show. It looks disturbingly like somebody I know, especially the two spiked shoulder pads and the love for beer!)

About a year ago, when we decided we were going to have a two-year celebration marking GWAR’s 25th Anniversary, we knew we had to deliver the goods, and in doing so take full advantage of this milestone. It was/is our best and maybe last chance to get GWAR to the level it deserves — complete and utter domination. Not until the 50th Anniversary will we have a better chance to remind people how great we are!

But I think even the most optimistic of the GWAR slaves is surprised at how well the party is shaping up. At the end of the U.S. “Lust in Space” tour, we jumped right into working on our new album, establishing gwar.tv (with the Crackathon, remember?), and bringing back the GWAR-B-Que! Then it was off to Europe to crush festival after festival, and then it was the latest news…our new album, “GWAR’s Bloody Pit of Horror”, is set to drop world-wide this fall (TBA but in November), a huge U.S/ Canada tour is in the works in support of GWAR’s second studio epic in as many years…a tour that just had Australia and New Zealand added to it!

But that doesn’t excuse my lameness in neglecting this column, so let’s get back to the riveting, semi-monthly spectacle that has been forgotten as…

GWAR, Me, and the Onrushing Grip of Death Part 26
“The Bishop”

I had populated the new GWAR with the “crumbs of the crop”, true gems of the local punk rock scene, semi-stars, drunks and junkies to the man. My final and greatest score was “The Bishop”, local bass player and notorious malcontent. The Bishop was the almost the perfect musician for the Richmond scene, immensely talented yet sour about it. Throw in scornful of others and generally bellicose, yet still projecting a youthful cheerfulness that enabled him to get away with murder, and you had the tip of the iceberg that was The Bishop.The only thing he had working against him was the fact that he was from Hopewell, scene of the famous Kepone spill and a horrible smelling paper-plant. Despite it’s proximity to Richmond, Hopewell got none of it’s cool points, and fortunately that made him just as much of an outsider as I was.

Plus he was fat. Not like disgustingly obese (not yet, anyway…), but very fat as fuck. Big-boned at least. Big, FAT bones that needed beer poured on them constantly. What, with my over-sized head and delusional outlook we bonded as only fellow mental and physical freaks can, skipping practice to indulge in endless games of Cyberball at Station Break, during which “The Bopst Show” would occasionally show up at and kick both of our asses.

(Yes, I have changed the character’s name from “Asshole” to “A-Hole”, to “The Bopst Show”. Keep up with this shit!)

I’m not quite sure how he got in the band. He was at the time still in high school, playing with a band called The Guilty, an erstwhile but ultimately banal sorta-punk outfit. I didn’t want to go at him directly, because I didn’t want to feel bad later about him not going to college and ruining his life, so I left most of the wooing to Sleazy, done over pitchers of beer at Rockitz.

Around this time we finally moved into our first real Slave-Pit since the eviction from the Dairy. Located at Broad and Laurel, we had a ringside yet birds-eye view of the nightly carnage as the bars spilled into the streets. For $450 a month we got the whole upstairs level (and after some creative expansion/ lock-picking, the cellar as well) above what was back then Labor Pro, was before then a massage parlor, and is Aladdins Pizza today (You Ring, We Bring!). The walls were painted a garish red and there were several inner chambers that those of us requiring housing quickly took over. The Pit (an upstairs Pit, at that…) was right across from Rockitz,  where most of the cool bands played, right next to Ivory’s, the most violent club in town, and right around the corner from the Grace Street strip. To say that it was the perfect set-up for all kinds of debauchery was a considerable understatement. With that on our side, it was was pretty easy to get The Bishop in the band.

Getting The Bishop cemented our line-up in a way that I felt was a mother-fucking Dream Team of punk rock power. Despite my gigantic skull, I anticipated a huge step-up in the level of hot slut-dom (and music) this new GWAR would bring to the table. As far as to what it was going to sound like, it was pretty wide open. I was still flying my punk flag, and really hadn’t listened to metal since Double Live Gonzo. But bands like D.R.I. were bringing it into punk, and the early results were sounding good. As far as the then-current metal gods, I loved Motorhead, but they were pretty much the exception. I wasn’t really into Maiden or Ozzy, and for the most part the double kick had always in my eyes and ears been associated with the self-indulgent excess of 70’s hair bands or Rush-esque prog-rock crap. But now it was starting to sound pretty cool. And some little band from California named Metallica was starting to make a big noise. Metal was back (again) and though I wasn’t quite ready for it in our band but I could see it going that way.

Spewy really had a lock on that early punk/metal style, as his previous band, Unseen Force, was livid testimony to. Thuglas had a great dirty-metal guitar sound that sounded great in contrast to Spewy’s noodle-driven Gibson SG, (which has always been my favorite-sounding guitar in spite of all models being cursed with the amazing snap-off-if-you-look-at-it headstock. Spewy’s had about nine or ten glued patches in his and somehow it still lived). Hoseby was a machine whose relentless toms suited us well (he was responsible for the classic “Horror of Yg” drums). But it was The Bishop that brought us the wild card…young, fervent, and just an insanely good bass player and singer, with a completely warped persona to match. My only worry was that I was going to suck!

And I really needed not to. Because I had been doing a lot of sucking! I had blown it on guitar, after years of publicly deluding myself that not only could I play it, but that I was actually good at it. After that I had got the singing job by accident. I drew some pretty good cartoons, but as a fabricator I certainly had not distinguished myself. It wasn’t that my ideas were bad, it was the execution of them that lacked. For instance there was the time I spent a few days knocking out a spike-covered pair of boots for Oderus, only to have all  of them get knocked off the first time I used them. But despite my flails, I was good at talking my way into things, and soon had a job through the Muscleman at the Science Museum. Even after getting caught urinating behind a display I soon managed to bring home some side work from the Children’s Museum. They wanted to pay me 300 bucks to build a Chinese dragon that could put on by children to run around in for an upcoming festival for inner-city kids. This was my chance to make a cool dragon out of scrounged materials, then blow all the money on beer and weed.

I bought a couple of ten-gallon buckets of construction adhesive (who wanted to spend all that time sewing?) and set to work finding my other supplies. This was one of my last Dairy projects so of course I turned to the labyrinthine tunnels of that place to find the materials I needed to glue together into a lightweight, durable structure that little kids could play with easily. So of course the thing to do was to gather moisture-bloated and half-rotted wooden struts from various forgotten corners and bend them into hoops which I duct-taped together after the glue refused to stick to the moldy surfaces. Then I covered the already alarmingly heavy structure with a huge piece of vinyl which I proceeded to glue thousands of cut-out vinyl scales to. Just moving it across the room took like three people and caused several of the hoops to crack. By the time I had attached the over-sized dragon head, made out of plaster, I knew the project was in serious trouble.

But what to do? I had to have the thing ready for a horde of screaming kids first thing the next day. Somehow I talked Sleazy and Sexy into helping me bring it to the event and show the kids how to use it. The only problem with that was the fact that the “dragon”, and I use the term in the loosest of manners, was a broken and disheveled heap of upholstery scraps lying in a puddle on the Dairy floor. So when the appointed hour came, I was nowhere to be found, save for an apparently hastily-scribbled note (it had actually taken hours to write through the elaborate lie), attached to the completely inadequate puppet’s ineptly-fashioned hide. It told of a family medical emergency that simply demanded my presence, so much so that I was forced to slink away in the middle of the night and take a bus to northern Virginia.

The next day was a complete disaster. For Sleazy and Sexy, that is. (I am going to change these code-names soon, these ones are just too obvious)  By the time they had managed to get the thing out of the building every hoop had snapped and the duct tape was running low, as  I lay snoring and oblivious, many miles away at my Mom’s house. Back in Richmond the day was spent by horrified parents watching the creature flatten the groups of disconcerted inner-city youths that were forced to play with it, until their splintered palms dripped blood, blood that was rudely smeared across their weeping faces faces in vain attempts at staunching the flow of bitter tears. Whitey had betrayed them again. And from the hateful message I got on my Mom’s answering machine (back then they were huge things that recorded sound on clay tablets), it seemed that the six pack of Black Label I had promised the boys (a lie, anyway…) was a completely inadequate measure of comfort in the face of the shame and embarrassment my betrayal had brought upon them.

I endured four months of phone calls imploring my to return to the Children’s Museum to “fix this fucking thing”, which I ignored to the syllable. The creature ended up in the dumpster, along with what was left of my reputation as a fabricator or even a semi-responsible person…

GWAR, Me, and the Onrushing Grip of Death Part 27
“The Golden Battle Barge”