GWAR, Me, and the Onrushing Grip of Death: Part 24

When we last left off, we were getting kicked out of the Dairy, our band was bailing on us and Techno had packed off to Detroit, taking the costumes with him. For whatever reason, GWAR seemed destined to be exactly what we had intended it to be: a joke.

Every time I do something stupid I write about it on my website. Much to my shame (and your amusement), it is one of the most popular pages. In fact, people can’t seem to get enough of my stupidity, and encourage more of it. Here’s a sample… 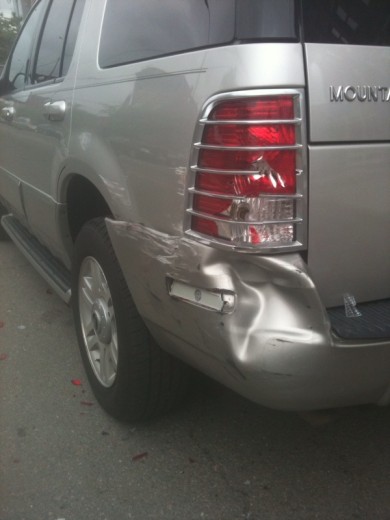 May 19th, 2010 I am running around like a maniac, trying to move the Slave Pit across town while at the same time trying to sort out the details of renewing my passport (extra-complicated Canadian model). The AC is out in my truck and my phone won’t shut up. Somebody drives by with their stereo on “lose your bowels” setting, then, after my ass settles down, my radio explodes with a car commercial where by law they have to shove in a million stupid facts about title, tags, etc…so they speed up the voice so the words are there but you can’t possibly understand them…and I am just standing there in the street, trying to make sense of this whole fucking spectacle, when I realize my truck isn’t where it’s supposed to be–it’s supposed to be right in front of me, but now there is just a empty parking space. Like a pudding trying to congeal, my mind tries to recognize what is happening and put it in a reasonable context. But I can’t. I’m too high!

Then I hear a crash, barely audible over the din which surrounds me. Sweaty and flabbergasted I look up and see the back of my truck, all the way on the other side of the intersection. The pudding solidify s and I finally put it together…I must have not left it in gear, and my truck has rolled off down the street, colliding with a Mountaineer (at the time I was sure it was a Lexus), bouncing off it (more like lurching, it was going all of five miles an hour), and rolling back into the street, where it gains speed and enters the upper portion of the huge hill. And if it goes down that hill, people are going to DIE.

No! Nothing but the word no– over and over again!

I snap into at a full sprint down the street in pursuit of my truck, my new (used) truck…which appears to be gathering momentum quickly, as for one sickening instant I think I might not be able to catch it. Oblivious to the traffic I run down the street, arms pinwheeling, howling at the the top of my lungs. Tears, sweat and saliva fly everywhere as I feel the full chaos crash upon me…my truck is barreling down the street now and all I can do is watch as a guy comes flying out of the bar further down the street, chases down my errant vehicle, leaps into the cab through the passenger door, and quickly corrals the beast before further accident or injury.

Breathless and sweaty, I am freaking out so bad that a small crowd gathers around me, obviously thinking I am on drugs…in fact a man identifies himself as “a mental health professional”, and informs me the police are on their way, then asks me if I am on drugs again. Faced with the prospect of cops getting involved, I calm down quickly, then am informed the reason that this had happened to me was because of the Washington Redskins paraphernalia dangling from my rear-view.

Once again I am one lucky son-a-bitch. Nobody is visibly injured injured, and there is not a hell of a lot of damage. My insurance should cover it. For all my freaking out and hysterical raving the situation is exactly the same way it would have been if I hadn’t worked myself into a tizzy.

After that asinine incident I have pledged to try to not to stress out uncontrollably any time anything happens. But I won’t stop doing stupid things, and I won’t stop writing about them either! You can find them on the “Stupid” at oderus.com, oh wait, here it is!

I’ve been keeping the page going for years so there is quite a collection of stupidity, preserved in hallmark examples of me at my worst. Enjoy, and thank yourself that you’re not me!

SO LET’S GET ON WITH TODAY’S PRESENTATION.

Part 24: THE DEATH OF THE DAIRY

Episode 24? Did I screw the numbers up and skip 23? Man, the wheels are really falling off this thing. First he doesn’t know what number episode it is even though he could look it up in like 20 seconds. Second of all he actually apologized to Surfer Girl, even then not apologizing for the right thing, which was to give her the idiotically un-original “Surfer Girl” for a moniker in this story. In fact Wolfman gave me shit about his name (also incredibly banal and wow, I shifted tenses twice already). So he folds (three) and re-names “Surfer Girl” “The Brown Beast” (it WAS a one-piece, I again stand corrected, there will be no Xbox for a week…). And “Wolfman” now is known as “The Weed-Wolf”. Better names, to be sure. And finally he seems to have left his best friend, the ever-sinister “Dr Skull”, out of the entire story! 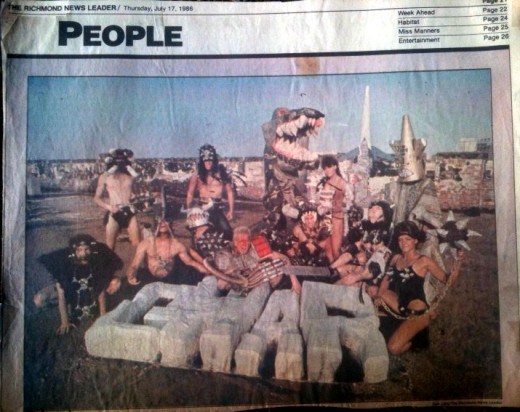 GWAR, on the roof of the Richmond Dairy, circa 1986

How young, how dumb, how fun. Before we bid adieu to the Dairy and the years we spent there, let us remember with profound loin-stirrings the original incarnation of GWAR, which came to hideous life in the murky confines of the Dairy during the what would later be called by GWAR elders “The Years Without Light” or even more famously “The Dim Time”. When we last left off, we were getting kicked out of the Dairy, our band was bailing on us and Techno had packed off to Detroit, taking the costumes with him. For whatever reason, GWAR seemed destined to be exactly what we had intended it to be: a joke. But before all of that chaos descended we managed to immortalize that time, with the help of the now-defunct Richmond News Leader!

From left to right, first their character name and then their nickname for this story. Fascinating stuff!

1) HANS ORIFICE OR SPHINCTER (details are sketchy) A.K.A. “Tommy Gun”, drummer for the Alter-Natives, his Dad made amazing apple juice that was often our sole source of sustenance in the Dairy. Irrepressible, dashingly handsome, and supposedly hung like a mule, Tommy went on to become the consummate Richmond and then international weirdo–i.e. he was in about a million awesome bands that most people have never heard of. Cares not one whit. Good friends with yours truly to this day, Tommy-Gun was recently tapped to stand-in for the unfortunately dead Bam-Bam at the hopefully upcoming Death Piggy re-union.

2) STEPHAN SPHINCTER A.K.A “Jazzbo” In the band from it’s earliest inception, Jazzbo would go on to hate the memory and react like a hackled badger anytime GWAR was brought up. Found love with a mail-order bride.

3) THE SEXECUTIONER A.K.A.”Spike” With his Sargent Rock jawline and Rat-Pack demeanor, Spike, along with Sexy, created the “Swamp”, by far the most accommodating hovel in the Dairy, and was the original “Sexecutioner”. Co-creator of “The Shit Rag”, a threadbare towel which everybody used to wipe their asses, then left in the shower.

4) BALSAC THE JAWS OF DEATH A.K.A. “A-Hole” This local radio personality has bedeviled the author for years with his imperious attitude and rugged good looks. For years pioneered the development of a non-sexual “ball-washing” technique he learned in Kuala Lumpur. Sickened by his customers recurrent erections, A-Hole abandoned the cutting edge practice in favor of something that didn’t involve massaging other men’s scrotum’s with his mouth (in a completely non-gay way, of course…)

5) CORNELIUS CARNAGE A.K.A. “G-man” Beloved Alter-Natives guitarist who was also called “Slug” by his less-enlightened (not high enough) friends, due to his early mastery of the relaxation technique which would later be described as “slack”. Told Greg Ginn he didn’t want him to produce his record.

6) TECHNO-DESTRUCTO A.K.A. “Techno- Destructo”, along with Sexy, was the original founder of the Slave Pit and the undisputed creator of GWAR’s earliest look. Created the first “spew-dick” for Death Piggy’s infamous Wendy O Williams show. Powered through the early days on a diet consisting of nothing but 2-liter bottles of Dr. Pepper and a substance he would create known as “glop”, which could also double as construction adhesive. Later got mad and left, only to later return, then get mad again, but this time not leave, then leave.

7) GOR-GOR Not sure exactly who is in here, thinking it is probably Sexy though it might be The Mantis…

8) JOEY SLUTMAN A.K.A. “The Italian Stallion” replaced brother Johnny Slutman who had quit onstage earlier in the story. Left band after alleged hanky-panky (i.e. fucking) with an un-named band members girlfriend. Possessed the “Voice of Power” and did really well on early versions of “A, E, I, O, U” and “GWAR Theme” but quit when he realized just how horrible of a guitar player I was destined to continue to be. Went to Philly and joined the mob.

9)THE TEMPTRESS A.K.A. “Miss Not-Appearing In-This-Story” is as completely forgettable as someone can be. Out there somewhere, doing something.

10) ODERUS URUNGUS A.K.A. “Me” This is the earliest version of Oderus and looks nothing like what the character would morph into. In fact there wasn’t a fake dick on anybody at this point! Am happy in this picture because I got to have sex with the girl next to me.

11) CARDINAL SYN A.K.A. “The Weed-Wolf” Though he never actually appeared onstage, The Weed-Wolf was smart enough to be around the day the photographer came by, slip on the most basic costume, and act like he was in the band.

12) AMAZINA A.K.A. “The Brown-Beast” Brought a level of beauty and spunk (and a great ass) to the band, but unfortunately sabotaged herself with the insistence that Gor-Gor be made to wear “Hitler’s Underpants”. 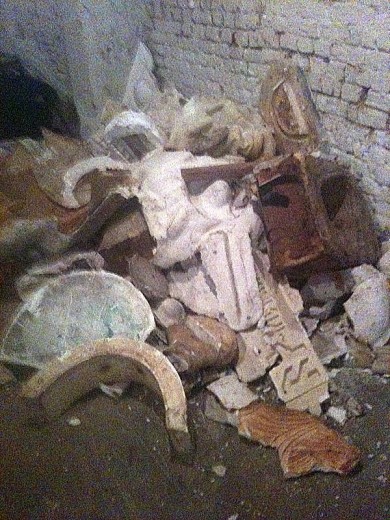 It’s only fitting that we bring the Dairy years to a close just as we vacate our current headquarters on Hull St. and head over to the new Slave Pit on Boulevard. It was almost 25 years ago that the Dairy finally folded, and we stood there, surrounded by piles of rubble strangely similar to the one you see above, wondering what the fuck to do next.

The Dairy was done, the band had bailed, and Techno had taken away our ball. Was this the end of GWAR? All this and less in the next episode of “GWAR, Me, and the On-rushing Grip of Death!!!!!!”