GWAR, Me, and the Onrushing Grip of Death: Part 21

Somehow, even after the carnage of the Death Piggy pie fight, the VCU Concert Committee agreed to allow GWAR to play a free show in Shafer Court, and actually pay us $750 dollars to do so! The story continues! 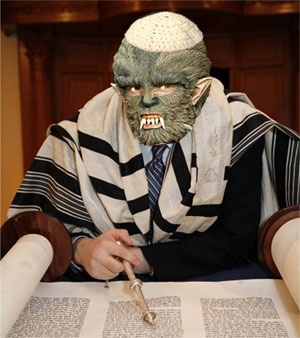 The Crack-a-Thon is almost upon us! And we’ll have guests like the guy pictured above. He’s actually not a Jew anymore, he’s just Jew-ish…remember be sure to tune into crackathon.tv on April 16th at 7:00 pm EST for the greatest entertainment event since the “For the Love of Ray J Season Two Re-union. And I thought he really cared about those hoes. Shocking!

Part 21: A Saw is Coming Through the Wall

Somehow, even after the carnage of the Death Piggy pie fight, the VCU Concert Committee agreed to allow GWAR to play a free show in Shafer Court, and actually pay us $750 to do so! That to us was a ridiculous sum of money. To think that someone would actually pay us to dress up like cavemen and wallop each other with over-sized foam mallets. After doing this for 25 years it seems like business as usual. But back then it was a major life-changing event, not just for ourselves but anyone who witnessed the spectacle of what I believe to this day to be the most spectacular performance in GWAR history.

By this point I had finally settled in as lead singer, a job I had always wanted but was more than a little leery of taking. I knew that whoever had that job was going to be run ragged trying to hold this tiger by the tail or at least be reduced to a drooling idiot by an art department that was already gnarly. I was content to stand around with my horrible guitar sound and occasionally mouth off. I didn’t have a sick rubber mask, just a skateboard helmet with some spikes screwed in it. It was a real proto-Oderus, much more human than the sickening fiend so many know and love (?) today. But I wasn’t destined to stay in the background. Each lead singer that we got was flakier than the last one. Joey Slutman kept trying to fuck Techno’s girlfriend, The Temptress…Johnny Slutman had suffered a nervous breakdown onstage and had run off down the street, shedding costume pieces over his shoulder. And at one point CharlieO was going to be a “Baby Huey” lead singer character in a spiked helmet and an over-sized diaper. For better or worse, I settled into the job.

Wait, did I write about that part already? It’s been a long day. I’ve been trying to get this Crack-a-Thon thing going. WebTV and all that. Check it out at crackathon.tv. Anyway we did our first live webcast tonight. Not much to brag about but at least it worked!

I had met Surfer Girl in Schafer Court (everything happened in Schafer Court)…she was from Va. Beach (or Reston, I can’t remember)…well, she looked like she was from a beach, or at least some exotic world where all the women were incredibly hot. She used to ride through the Court on a beach cruiser wearing nothing but a tiny red bikini.She ended up in my painting class and I ended up in her pants. She was so hot that was actually painful to look at her, but unfortunately she was also at times painful to listen to. The mooshy meta-physical mouth poop that constantly dripped out her pie-hole made me want to plug it up with a penis, which I did with vigor.

The GWAR Schafer Court show became a watershed moment for the Dairy art scene. Anybody who lived, worked, or hung out there came out to contribute something. We’d have these huge rehearsals where people would completely ignore my attempts at scripting the thing and just make up their own lines. The cast of characters were set against a ridiculous story with about 10 different monsters fighting each other at once. The band members of GWAR (all six of them at least, including Cornelius Carnage, Hans and Stephan Sphincter, and several that had no names) fought a long and confusing host of costumed creeps including the earliest versions of Techno-Destructo, Cardinal Syn and the Murder Chair, a gang of terrorists armed with these over-sized cloth and glue weapons Techno had made, Uncle Knobby (a cripple in a wheelchair, he was a holdover from a Death piggy show the year before) and finally the Chernobyl Cockroach, which got hosed by a giant can of bug-spray (we used a real fire-extinguisher and almost killed the guy inside, whom I believe was Sleazy P. before he had assumed that role).

The highlight of the show was when the terrorists detonated a bomb that destroyed a passing airplane. We had created a giant cloth and glue (everything was cloth and glue!) jet engine and stashed it on the fire escape overlooking the crowd. When the time came and supposedly airplane debris was raining down on the crowd we pushed it off the parapet and onto a metal guide line, where it hurtled down towards the stage to crush the unfortunate Uncle Knobby. The wire sagged, then went taut, and the engine, trailing strands of toiler paper, somehow made the journey from the fire escape to the stage without killing anyone. It was fucking beautiful.

It was an utter triumph. We’d never dreamed so many people would show up, and to this day it remains the most people I have ever seen in Schafer Court. But things were going to get shitty quick.

About a half hour after the show I noticed that the check for 750.00 was missing. Either I had lost it or someone had stolen it, and though it was quickly canceled and re-issued, it was “the last straw” for Techno. That was weird because I didn’t know there were any straws before that! In the course of a day of two, he had gathered up all of his costumes, stored them at his house, and left for Detroit to take a job as a security job in some factory. Suddenly, GWAR was naked.

But my sudden downturn of bad luck was not over. My tenuous hold on A-hole had grown as tiresome as his appearances in this story. He was ready to move on. He’d left Death Piggy, but stayed in GWAR, just enough to mock me. After Shafer Court the Alter-Natives pretty much quit GWAR to work on their band exclusively. I had lost my costumes and my band. I still had a hot girlfriend, but she was a fucking pain-in-the-ass.

One day I painted a weird squid-monster on the door of the abandoned deep-freeze that served as the Alter-Natives practice space. It was finally me giving in. I had recognized the Master and sought to pay him homage.

But he didn’t like it! In fact, he told me to not do it again. That was kinda pointless, as it was already done. Soon after that the Natives had landed a record deal with SST. They were going to drive out to California and make a record with Greg Ginn. They piled into the Spectran, an old-hospital van that they smoked lots of pot in, and away they went. Even though I knew A-Hole was going to hate it, I had painted a screaming face on the spare-tire cover. It was the last thing I saw, my own painting mocking me, as the van bounced off down the alley, taking the Natives to a glorious destiny in California and leaving me and GWAR in the dust.

Lost, lonely, and confused, I wandered back into my milk-bottle and pondered my future over a six-pack of Black Label and a pack of swiss cheese I had stolen from Sleazy’s refrigerator. Suddenly an ear-splitting roar filled the air as a shower of dust and debris exploded all over me. The drunk renovation crew had decided it was time to put a saw through my wall. And it was time for me to get the fuck out of there.

NEXT TIME! Escape! Weed! A new band! And this week is done!