GWAR, Me, and the Onrushing Grip of Death: Part 28

The new GWAR made it’s debut in July of 1986 at Rockitz, and I can’t remember much of it so it must not have sucked too bad. What I do remember was taking the couple hundred bucks we had earned the night before and piling into the Battle Barge for our first real road show. We drove to some crummy bar in Nags Head where they pulled the pool tables together and told us it was a stage. 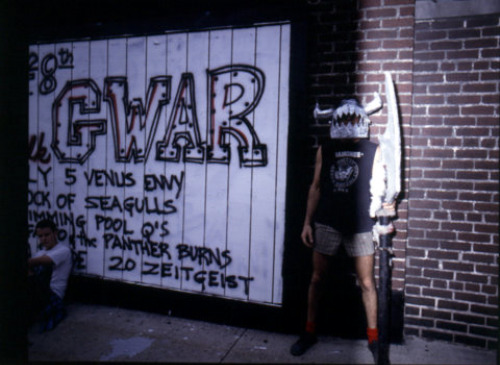 To say that the origins of GWAR were crude is a considerable understatement. Unidentified GWARrior outside Rockitz, circa 1987. Note: Flock of Seagulls on the marquee!

Before I get started with this latest bi-monthly installment to what has become, next to minor-league sports, Richmond’s most cherished semi-recurring event, I would like to take a moment to piss and moan about people who stand WAY TOO FAR AWAY from the counter when they buy stuff. It happened to me last night—I was in Walgreen’s buying a bottle of wine, a 200-pack of Benadryl, and a Cosmopolitan when the situation confronted me—there were two girls standing about ten feet away from the only open register, talking amongst themselves (about me). I was pretty sure they were in line; it was just that they were so far away from the counter that it felt awkward to stand behind them. And then one of the worse variations on this predicament occurred—somebody got in line AHEAD of them because they were so far away from the counter in the first place, and even worse, this person was a bedraggled crazy woman who immediately started screeching like a cockatiel on crack when the girls politely informed her that she was actually supposed to be behind me. Then it got even worse! A concerned employee opened another register, creating another opportunity for potential homicide…why? Because there is no set course of action on who gets to step up to this register first—is it the person who has waited the longest, or the person who is the closest? Or perhaps the craziest homeless person? But at this point it was all too late, I couldn’t hang, and I threw my evening’s entertainment to the floor, exiting the store more quickly than Tia Tequila leaves an ICP show.

GWAR, Me, and the Onrushing Grip of Death, Part 28

Look, I never said this was going to be particularly accurate as far as the time line was concerned. But thanks to Blobby, a loyal GWARrior you have yet to meet, I have managed to gain access to an actual document containing a record of all the major events and shows in GWAR’s history. This should keep the narrative pretty tight and ensure that I don’t miss many juicy nuggets. But I’m happy to have managed to stay on track so far. Because you see, it’s a lot easier to track the diseased efforts of my solo career, but now we are reaching into the group debauch of an elite group of miscreants whose exploits are still running strong after 25 years. And as this is a historical tome, we want our history accurate whenever possible. This isn’t fucking high school!

The new GWAR made it’s debut in July of 1986 at Rockitz, and I can’t remember much of it so it must not have sucked too bad. What I do remember was taking the couple hundred bucks we had earned the night before and piling into the Battle Barge for our first real road show. We drove to some crummy bar in Nags Head where they pulled the pool tables together and told us it was a stage. There was this little hot redneck girl running around in these tiny jean hotpants, and of course I immediately forgot the whole reason I was there and bent my full effort into trying to fuck her. The show was a disaster—about ten people showed up, and we were paid in coupons for free appetizers. I never ate so many hushpuppies in my life! But I didn’t care, as we had wrangled an invite to (lets call her…Rotten-Twat) Rotten-Twat’s house where she lived with her construction worker boyfriend, who was luckily out of town. I was pretty sure I was going to fuck her, even though she kept disappearing to go get fucked by Hoseby or Sleazy, I was never sure which one. By the time I finally nailed her it was basically like fucking one of them. But I was happy, laying there on her blow-up mattress, scratching my-soon-to-be infected cock. Happy until— 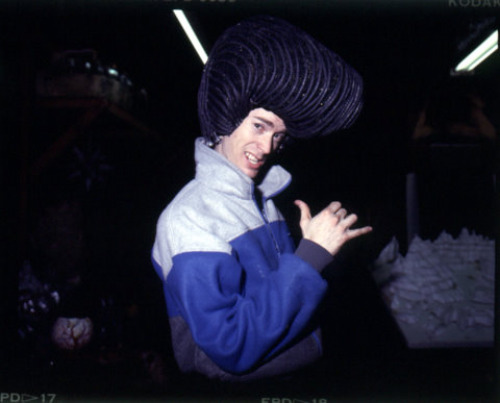 Sleazy after the “big hair injection”. Yes, that is rope glued to couch-cushion foam.

Just a few days later we were playing Rockitz again. Back then it seemed like we played Rockitz at least twice a month, and actually that was essential as it was the only way we could pay off our massive tab of tuna steak sandwiches and pitchers of beer which were our only sustenance for months. But this was not just any show—we were playing with the Mentors, led by their legendary drummer/frontman El Duce. The Mentors had quite the rep in the hardcore scene both as outrageous performers and some of the first punk music that was starting to sound metal. In fact it could be argued that they weren’t punk rock at all, just foul, and as soon as their smoke-belching 40-year old tour bus pulled into the parking lot I was on it, missing load-in and drinking beer with El for hours. We hit it off immediately. I had heard all the stories about him and was not too surprised to discover that little of it was true. El was a kind and funny man who loved upsetting uptight punkers with his “rape-rock” shtick—which was a total joke. In fact, he just loved upsetting everybody, like my half African-American friend who accompanied me that day. He worshiped El, that is until El started calling him a “high yellow.” They had a great show that night, and both Sicky Wifebeater and Dr. Heathen Scum were in fine form. We hung out for hours, listening to El’s stories about what a dick Henry Rollins was. I made a lot of good friends that night, including El’s roadie, Horndogger, who would turn up again and again over the years, always with coke.

But their was a lot more to this destined meeting than high-fives and beer-bongs. Before The Mentors left, we loaded them up with GWAR shirts and video tapes, which they proceeded to wear everyday for the rest of their tour, while showing anyone who would watch (and forcing those that wouldn’t) the videotape of this crazy band from Richmond, Va. We didn’t know it, but the rumors of GWAR were starting to spread across the country.

But we were clueless about this for now, as we were too busy adding any element of drama we possibly could to our lives in order to make it seem like they were really unique and important. Even though we only had a couple of shows under our belt, the band dynamic was becoming clear. First of all, we were “King Shit of Turd Mountain,” and you couldn’t teach us a thing. We were altogether too eager to become jaded, cynical, and bitter, and leapt to ourselves with alacrity. The Bishop hated Thuglass, mostly because Thuglass was a good ten years older than the oldest GWAR member, but also because The Bishop wanted his friend Dirty D to play guitar. Thuglass in turn looked upon The Bishop with a disdain reserved for people younger than him. It led to many nasty remarks and snarky responses in kind. Spewy was turning out to be a big blob. Instead of giving me the solid band-pro attitude I had first brought him on for, Spewy began to turn into a giant amoeba that constantly whined for veggie pizza. He was powerless against the vicious needling we soon all began to indulge in heaping upon him. Meanwhile our drummer, Rox Hoseby, didn’t say much. He was so completely dispassionate about everything that you were never even sure how you felt about him. And then there was the art department, which, despite my promises to the contrary, ended up doing all the work and quickly became hostile and resentful of the band members, with good reason! We were dicks!

In two weeks! I am not going to tell you because I am a big fat liar who always ends up writing about other stuff! So see you in two weeks for Episode 29 —