Grande coffee and growlers: New development brewing on the Boulevard

A new Starbucks and a beer concept called ‘Growlers To Go’ are planned for the Boulevard near Scott’s Addition. Developer Charlie Diradour is brewing up his second Boulevard project to date–a new Starbucks and a beer retailer called ‘Growlers To Go.’ The project is under construction at the site of the former Kangaroo gas station, which was demolished this past summer.

The drive-thru Starbucks will be a welcome addition for busy commuters on the busy thoroughfare, but the really interesting piece of this development is the Growlers To Go concept, which entrepreneur Reed Carter expects to have open sometime in December. Diradour tells me the hope is to have it open “before the holidays.”

The concept will be fairly similar to a chain called The Growler Station, which should give you a good idea of what to expect at Reed’s joint.

Richmond BizSense reports the beer mecca will have 55 brews on draft that–as the name suggests–can be bottled in growlers to take home, plus more than 150 bottled varieties to choose from.

The project sits adjacent to the Cookie Factory Lofts (former Interbake Foods cookie and cracker plant) and other parcels that owner Rebkee Development hopes to redevelop as a semi-cohesive project in the future.

The Midlothian-based commercial real estate giant has snatched up a number of properties on the east side of Boulevard in the past several years, including a former Bill’s Barbecue location. Diradour purchased his half-acre parcel in March. 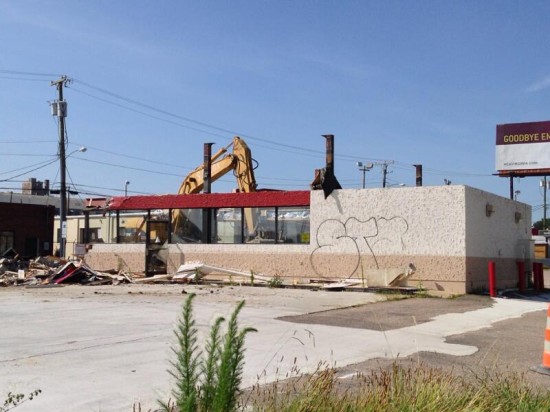 Demolition of the former Kangaroo gas station this past summer.