From history to #opaRVA, Greek Festival celebrates all things Greece

The first known Greek Orthodox community arrived in Richmond in 1896. Over 100 years later, their history–and their heritage–will be celebrated at the Richmond Greek Festival. In the Pantheon of the Richmond restaurateurs stands Stavros and Stella Dikos (Stella’s), along with their daughter, Katrina Giavos and her husband, Johnny (Sidewalk Cafe, 3 Monkeys, The Continental). While they sit atop the Mount Olympus of the local dining scene, they’re just a few of Richmond’s Greek community. The food, music, and dance of their Hellenistic heritage will be on display this weekend during the annual Richmond Greek Festival.

Now in its 38th year, the Greek Festival has become a local tradition. But the sights, sounds, and smells of the enduring festival tell a bigger story: an odyssey of Greek immigrants, a local community, and how all of Richmond can share the upcoming celebration with a little #opaRVA.

“It was one of the first [Greek Orthodox churches] in Virginia,” said Drew Baker, 28, Interim Youth Director for the Saints Constantine and Helen Greek Orthodox Cathedral, the parish that runs the Greek Festival. Some years later, Baker said the community created a local AHEPA 1 to “help immigrants get established” in Richmond and “to become part of America.”

In addition to being an active member of the parish, Baker is also a history teacher. But his knowledge of the history of the Richmond Greek community doesn’t come from only books, but from those that preceded him; local families and the community make a concerted effort to impart the history to their children. “We start young. It’s always been a part of our lives,” Baker said.

He said that one of the reasons why the Greek community has endured in Richmond for over 100 years is the food. “A lot of our immigrants have come in and started restaurants,” Baker said. There are the well-known families, Dikos and Giavos. But there are countless others like Baker’s grandfather, who sold hot dogs at Angelo’s near the old Thalhimer department store. In their own way, each has given a bit of Greece to Richmond.

The food Greek immigrants brought with them connected them to their heritage. But they also ended up dishing out generous portions to Richmonders over the years. “Greek food is very, very simple at its best,” Baker said. “I think that’s why people are so drawn to it.”

Food is definitely one of the biggest draws of the Greek Festival. Some of Baker’s favorites include pastisio, a baked pasta often served with a meat sauce, and the galatiboureko,2 a Greek custard pie. “A lot of recipes come from community members,” Baker said, often passed down through generations and through families. “The food we serve is definitely the traditional Greek fare.” 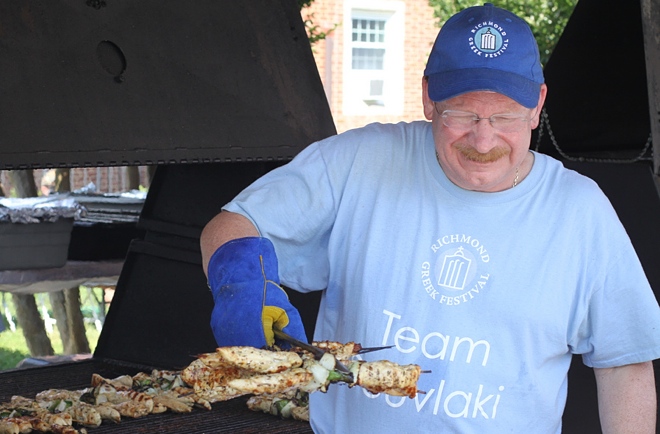 But the Cathedral community doesn’t stop with the taste buds when it comes to preserving Greek heritage. Limbs get a workout too. The Cathedral teaches and preserves traditional Hellenic dances in the form of dance troupes from the Alpha (1st-3rd graders) all the way through to Byanto (adults). Among the dancers at this year’s festival will be roughly 40 teens who will wear outfits that represent the different regions of Greece.

Baker said that the first Greek Festival began with just a few booths. Each year, “it kept growing.” In the late 1990s, the Cathedral created a formal festival committee to, as Baker said, “treat it professionally.”

While Baker said this year’s menu (PDF) won’t change much from last year’s, one difference organizers are focusing on this year is getting attendees to tour the Cathedral. Just as Richmond has shared itself with the Greek community, that community–roughly 800 families strong–wants to share right back.

“Greeks just have this tradition of sharing,” Baker said, and asked that Richmonders share their Greek Festival experience via the #opaRVA hashtag.

The Greek Festival is from Thursday, May 29th – Sunday, June 1st at the Saints Constantine and Helen Greek Orthodox Cathedral at 30 Malvern Ave.