The recently closed Ejay Rin is now a lunchtime spot. It’s owner has firm plans to develop the former noodle bar into a more sophisticated convenience market, the first of its kind in the Manchester district.

Ejay Rin, a ramen bar that opened in the Manchester District in July, officially closed last Saturday. Owner Andy Howell, however, is not giving up the location. He also has big plans for the former restaurant.

Located in the Corrugated Box Building, Ejay Rin had difficulty amassing customers, says Howell, for two reasons. The first: “Richmond is not really ready for the [noodle bar] concept,” said Howell in a phone interview with RVANews this morning. Although popular in New York City, Japanese ramen bars have yet to make it down the East Coast. Howell suspects that Ejay Rin was five years ahead of its due time.

The second reason why Ejay Rin failed, is that Richmonders are not ready to drive across the 14th Street Bridge into Manchester, a sparsely populated and seldom frequented destination to try cutting-edge culinary dishes. The lack of amenities in Manchester, however, gave Howell an idea.

Through the end of the year, the former Ejay Rin location will exclusively be a sandwich and salad lunch spot. The new operating hours will be 11am – 2:30pm, Monday through Friday.

Beginning in 2012, however, the location will expand its concept and become Camden’s Dogtown Market. The reason? “There isn’t a single convenience store,” in this area, said Howell. Residents of the Manchester area have to drive into Forest Hill if, for instance, they want to buy a loaf of bread or any other basic foodstuff. Not only will Camden’s Dogtown Market offer typical convenient store fare, but they will utilize their approximate 25-seat restaurant layout to additionally offer a sit down lunch menu. Later, they plan to add dinner hours. Howell spoke of coming from a family of grocers. His grandfather, for instance, owned a grocery store in Georgia.

When asked about Ejay Rin, Howell said, “We haven’t gotten rid of the idea.” He has deliberately kept signage and equipment specific to the ramen bar concept. This was done in the hope of reopening the restaurant closer to a denser Richmond population, such as in Downtown or the Fan. “We’ve perfected our noodles; we’ve perfected our broths,” said Howell. There’s no intention of having all of those things go to waste.

The new lunchtime restaurant opened today. Below is their menu (click on the image to enlarge to a PDF): 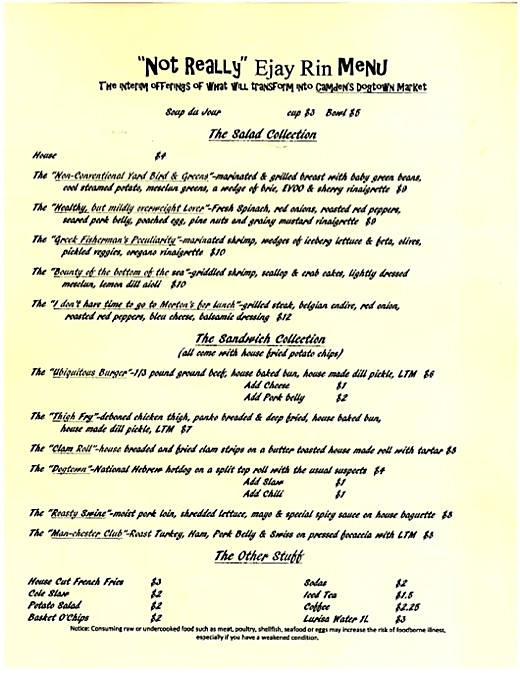