Food for a day in Roanoke, VA

They say you can never go home again, but I took 64 to 81 and got there in, like, three hours. I head straight to Towers Mall. It’s been four years since I last visited Roanoke and 13 since I moved away from my hometown. My car navigates itself to Towers as if programmed to do so. I don’t seem to be making any conscious decisions, and yet I’m on my way, a passenger, transfixed by the scenery, landmarks from my childhood, some of them overtaken by growth and change, others postcards from my past. Everything is familiar and yet bizarre.

I didn’t know what to expect of my meals during the day and a half I would spend in Roanoke, but here’s what I found: many of my memories were gracefully preserved, and Roanoke and Salem are growing up–combining their meat-and-potato traditions with new technique and sophistication.

In high school, I would eat at the Towers Mall Wildflour every Monday night, after debate–always soup and a Parthenon wrap. Back then, the restaurant was still owned by its founders, Doug and Evie Robison, whose family recipes made the location an instant success in the Raleigh Court neighborhood. Sourdough bread, soup, salad dressings, and desserts; all too often afterthoughts; are the stars of the menu.

Since buying the location from the Robisons ten years ago, Jeff and Teal Batson have changed precious little. Doug and Evie’s names are still all over the menu. Doug’s Chicken Salad, a fresh sesame-seed and cucumber variation, sans mayo, served simply over lettuce, and Evie’s Red Beans and Rice, which proudly claims, “you could eat this every day and not tire of it,” are true to the dishes I recall from over a decade ago, down to the sliced green onions on top. The soups–tomato cheddar, potato leek, gazpacho, white bean chicken chili, and my beloved Hungarian mushroom–are exactly as I remember them.

The original owners, the Robisons, still own the second Wildflour location, in a charming former grocery store in the Old Southwest neighborhood, near downtown. From the unassuming building, the Robisons and their team produce gorgeous cakes, fresh bread, and a complete lunch and dinner menu of their vegetarian-friendly food. It’s seasonal, farm-to-table cooking that doesn’t bother calling itself that.

OK, OK, it’s technically Salem. If someone had told me I’d be writing about Salem in an article about Roanoke, I would’ve met them with doubts, maybe even scoffs; a true Roanoke snob, I ventured into Salem exclusively to visit my grandma and maybe for a limeade from Brooks-Byrd Pharmacy. But here we are. Chef/owner Scott Switzer has put Salem on my map with elevated and satisfying food in a place that feels modern yet familiar.

The wood floors and exposed brick of Blue Apron Restaurant make the space feel inviting and airy; and the adjacent 5-seater Red Rooster Bar glows with a tint from the Red Rooster sign. The two sides compliment one another and Switzer’s menu of modern French classics. Each menu item is available in different portion sizes, giving diners the ability to share small plates or focus on favorites. In any size, the frisee and kale salad with pork belly and poached egg is a well-played version of a favorite.

Texas Tavern may, in fact, be the smallest thing to ever represent its namesake state, but what the ten-seater, 24-hour chili dive lacks in real estate it makes up for in consistency. To call the food at Texas Tavern ‘unpretentious’ would be pretentious. The menu is small, the prices low, and there is no sign of the 84-year-old Roanoke institution trying to keep up with the times.1 Texas Tavern is itself and nothing but. It’s a beefy, cheesy, oniony belch after a night of drinking–satisfying and pungent.

No matter where you’re coming from or what you’ve been doing all day, Texas Tavern is the place to go directly before hitting the pillow (unless you’re the acid reflux type, in which case, see a doctor before going to Texas Tavern.) Get the ‘Cheesy With,’ a cheeseburger, topped with a fried egg, relish, onions, AND pickles; plus a bowl of chili and a glass of milk, “the coldest milk in town.”

Do This First: The Historic Roanoke City Market

I hope you weren’t at the Texas Tavern too long, because it’s Saturday morning, and you’ve got the oldest continuously-operating, open-air market in Virginia to visit. 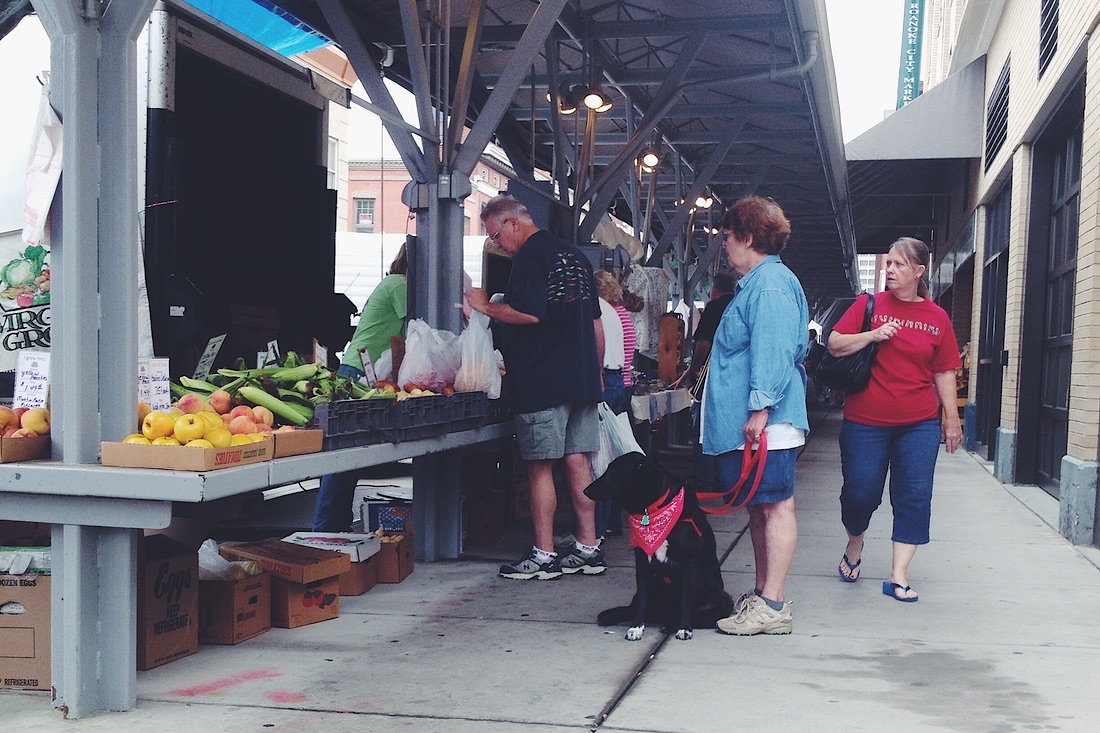 My grandpa sold fruit there in the 40s. Growing up, I spent hours there, sometimes getting my face painted by ‘The Gypsy,’ artist Katherine Devine, and buying tomatoes, to be eaten like apples while I wandered around, headed eventually to Mill Mountain Coffee & Tea for a lemon square and an Italian soda.

Vendor stalls line the sidewalk, filled with fresh produce, goat cheese, soaps, jewelry, and art. Walking along the market tables, chatting with vendors along a street closed to traffic, the square comes alive, and the sense of history is real. One vendor, Martin’s Plant Farm, has been with the City Market for over 100 years. 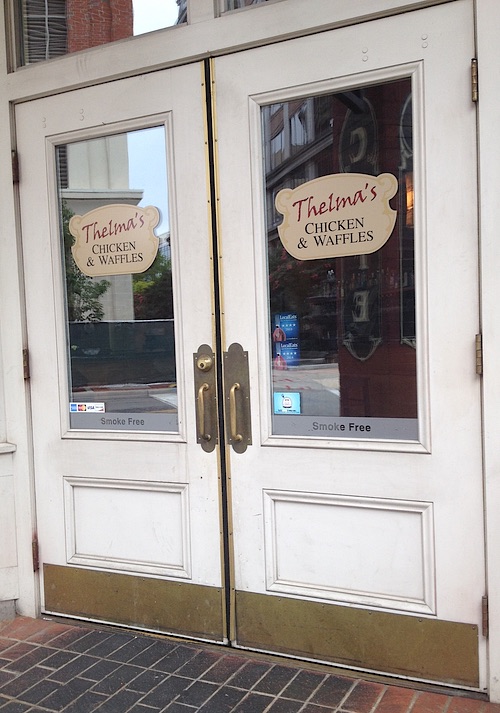 At Thelma’s, they don’t just greet you, they literally welcome you to the family, happily pronouncing “Welcome to the family!” to everyone who walks through the door. With gospel music ringing from the speakers, a trip to Thelma’s is like a tastier version of church. And if that doesn’t sound charming to you, then maybe a restaurant that specializes in chicken and waffles isn’t your thing. I, for one, want to be in the family. I want to pour syrup on fried things and join that family.

After stoking the fires of your hunger at the farmers market, slip into Thelma’s for a plate of their signature goods: a crispy, cinnamon-laced belgian waffle, cozied up to no less crispy chicken (I go tenders, but you do you). And then commence to gilding with butter, syrup, and, I suggest, hot sauce.

Before the days of Chipotle, my high school sweetheart Richie and I would scrounge for change in the seats of his Bonneville and split a $7 burrito from Red Coyote, a little, long-gone tex-mex spot in the Roanoke City Market Building. The burrito was giant by the day’s standards (normal according to today’s inflated burrito scale), and it was incredibly satisfying. Red Coyote is on the list of places I wish I could have again just once, but, lucky for me, Queso Southwestern Grill took up the charge of making $7 burritos in the market building, and they’re pretty darn good at it.

The Roanoke City Market Building, which underwent a $7.9 million restoration in 2010, is like a food court without all the mall issues.2 About a dozen independent vendors line the perimeter of the two-story building. Tostones de platanos from Havana Cafe, fresh pretzels and lamb borek from Euro Bakery, and wood-fired pizza from Fork in the Market are all highlights; and the food court-style encourages visitors (me) to try a little of everything.

But my heart belongs to Marco and Luca, a Charlottesville-based business with five locations total, recently transplanted to the Star City. Here’s my advice: Get two steamed buns, one vegetarian and one pork; hold one in each hand, and keep eating until you can give yourself a round of applause for a lunch well done.