Food desert no more: ‘get fresh’ program brings fruits and vegetables to the East End

‘Get fresh’ initiative debuts at Clay Street Market in the East End. Some East End community members will no longer have to travel far to look for healthy produce options after the debut of the Get Fresh East End! Initiative’s launch this week in two area corner stores.

The program, modeled after the national Healthy Corner Stores Initiative, works to help community food deserts by providing healthy produce and education to areas without major grocery stores. The collaborative work of many city leaders, including members of City Council, Bon Secours, the Richmond City Health District, and TriCycle Gardens, ‘Get Fresh’ is funded by the Virginia Department of Health. TriCycle Gardens along with Shalom Farms helped provide the produce that will be supplied in two East End test stores: The Clay Street Market and Valero Market. 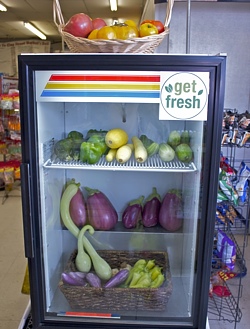 But TriCycle’s produce debuted in the Clay Street Market corner store about three months ago, said the store’s business manager Hamod “Shawn” Algaheim. Beginning with a small, short refrigerator that looks more well suited for Red Bull cans than fruits and vegetables, the ‘get fresh’ program started selling the local produce before the program’s official public launch this week and has already helped the community.

Algaheim said his business has somewhat improved since the introduction of the ‘get fresh’ refrigerator in his family’s store. “A lot of customers are excited to see it,” he said. Algaheim has been managing family-owned business for the last 20 years and says he is even improving his own diet because of the new produce.

“It will benefit the community because these are healthy items, it’s close to home for a lot of people,” he said. “Instead of going to a big market to get [these foods] they go up to the corner store and pick out what they want.”

Parts of the Seventh District, which encompasses the Church Hill neighborhood and much of the East End, are considered food deserts, areas where there is little access to stores with enough options to sustain a healthy diet.

“Many of our residents throughout the city die too early and too often from very treatable, preventable conditions and obesity predisposes a community for a variety of issues,” said Seventh District City Councilwoman Cynthia Newbille. “That’s the challenge. The good news is folks have come together to do something about it.”