Of all the noodles swimming in the global noodle bowl, ramen is top dog.

The slurpy Asian soup dish is shunning associations as the cuisine for dirt poor college students and hopping onto the palettes of American diners.

Writing in the The New York Times earlier this year, Pete Wells said: “The shift from soba connoisseurship to ramen mania is so thorough it can’t be called a trend anymore.”

Chris Staples of Foo Dog in The Fan won’t argue with that.

“Ramen is really popular in the big food cities right now: San Francisco, Chicago, DC,” he said one afternoon, resting his arms on the black-and-white Manga cards making up the restaurant’s bar. Foo Dog opened this year on April Fool’s Day to, in part, evangelize the working man’s noodle. “We were excited about bringing ramen to Richmond.”1

But as ramen-centered restaurants have become popular and have popped up across the country, Foo Dog decided to broaden itself beyond the broth dish. “We didn’t want to focus just on ramen,” Staples said. “Ramen is one of our most popular dishes2…but we sell a lot of the street food plates as well.”

In many Asian countries, hawker centers amass vendors, often in city centers, who dish out good, cheap food. Imagine if every Richmond food cart gathered and sold food together at the 17th Street Farmers Market every day. “That’s how a lot of the town centers in a lot of the Asian cities feed a lot of the people,” Staples said.

Hawker center dishes vary from country to country. “Whether it’s Teriyaki beef strips in a small Japanese town, or Penang curry in a Thai town center, we wanted to bring a little bit of everything,” Staples said.

For years, Staples and his fellow partners of Eat Restaurant Partners have owned the upscale pan-Asian restaurant Wild Ginger in Midlothian. “For a long time, we really wanted to do something similar in the city, but we wanted to make it accessible,” Staples said. “When we were looking at locations, the idea of doing Asian street food, focusing on ramen, is something that we thought would be really popular with the younger families and the college students.”

Foo Dog got its entrance into the VCU area when the 32-year-old Main Street Art Supply at 1537 W. Main Street closed in 2013. Eat Restaurant Partners scooped up the building.

Staples and the other Eat partners tapped Chef Ken Liew to create the menu inspired by both ramen and Asian street food. “Our chef is from Singapore. He grew up cooking this food. I think he started when he was 12-year-old working six days a week,” Staples said. “I like to think he knows his stuff.”

Among the three ramen dishes, Staples said the Malaysian Style Ramen is the most popular to date, with its coconut curry broth, lemongrass, galangal root, and fresh ginger. Each of Foo Dog’s ramen dishes can be tweaked by adding tofu, chasu pork, shrimp, or chicken.

“Consistency is what you’re looking for,” Staples said about establishing the restaurant’s reputation. “You want to come in and say day in and day out and say that ramen is always fucking great.”

But creating consistency can be tricky with a kitchen rooted in the traditional Asian culinary ways. “Everything is done by feel. They don’t use specs. It’s very organic. It’s a very traditional approach to cooking,” Staples said.

Foo Dog’s menu (PDF) isn’t the only aspect of the restaurant inspired by tradition. The restaurant takes its name from the mythical Chinese guardian lions. Two lions were always placed in front of Imperial palaces and tombs, temples, and government offices to ward off negative forces. Over the years, the Chinese lions came to be known as Foo Dogs (also Fu Dogs) here in the West.

But the Foo Dogs at Foo Dog get a modern flair. “We wanted to kind of pay homage to the VCU art school. We also wanted to give it an Asian spin,” Staples said about the restaurant’s decor. 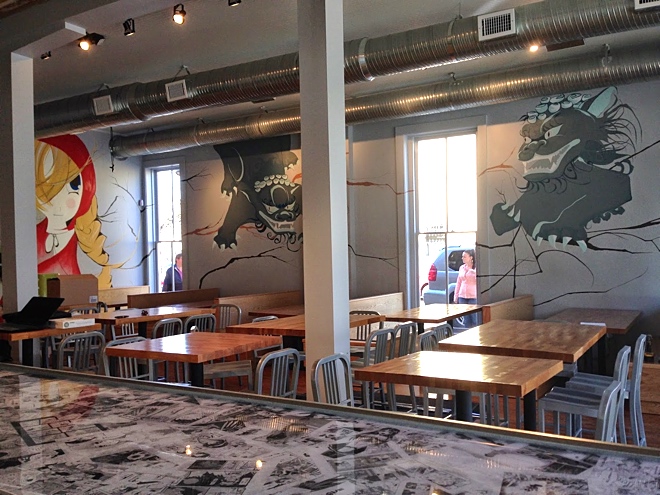 Staples wants Foo Dog to be a place people love. It’s no accident that the restaurant eschews haute cuisine and favors food loved by low-income and middle-class workers across Asia. The neighborhood pulsates with VCU students and also with young parents who aren’t interested in moving to the suburbs and trading in WRIR for episodes of A Prarie Home Companion. Foo Dog’s decor welcomes that. “It’s just supposed to be fun,” Staples said. “We want to be young, we want to be fun. We want people to be happy when they come here.” Whether that’s for lunch, dinner, or late-night drinks.

Across the street from Foo Dog is Baja Bean, a Fan mecca for weekend drinking. Its popularity inevitably throws Foo Dog a bone. “I find the busier they are, the busier we are,” Staples said. That should continue through the winter. “I imagine the colder it gets, that’s going to benefit us even more because [people outside Baja Bean are] not going to want to wait in that line.”

But Staples isn’t worried about Foo Dog’s late-night vibe. “We’re trying to build our business from the ground up one experience at a time,” he said. “We want to have a good nightlife, but we also want the experience itself to be the most important thing: coming in for the food and the service and the atmosphere.”

And while Foo Dog’s bartenders and waitstaff look like VCU students, Staples said don’t underestimate them. “The guys and girls here have taken the time to learn about the cultures and the cuisine and they’re passionate about it, and not just order-takers,” he said. “Our service here really is awesome.”

While confident in what Foo Dog is, Staples said he and his Eat partners will adapt to changes. “I would think maybe our menu grows to provide some more choices and maybe some of the things that are popular aren’t popular and we find something to take its place,” Staples said. “But I would say the feel and the experience will be virtually the same moving forward.”

One of the reasons why he’s confident of Foo Dog’s future is because the residents and students around it are stuck in time. “I think we’re very fortunate here because the neighborhood doesn’t necessarily get older, the neighborhood stays the same. So the young students can keep on moving in and the young families can keep on moving in,” he said. “So the area around us is essentially kind of timeless.”