Lt. Robbie Hagaman of the Richmond Fire Department said that investigators have determined the fire that occurred early this morning in Church Hill was “accidental in nature, with actual cause yet to be determined.”

The investigation is still ongoing.

Members of the Fire Department rescued at least two people by ladders last night in Church Hill after a fire erupted in the building housing Sub Rosa Bakery, according to Lt. Robbie Hagaman.

Sometime after 12:00 AM, Richmond Police officers responded to a fire on the 600 block of N. 25th Street. According to Lt. Hagaman, Police officers saw one man escape the burning building (Sub Rosa is located on the first floor of the building, apartments above).

Members of the Fire Department were dispatched at 12:44 AM. When they arrived on the scene, at least two people were rescued from second floor apartments by ground ladders as their exits were “heavily involved in fire,” according to Hagaman. The rescued suffered no serious injuries. The fire was contained around 1:32 AM.

Residents of the building are displaced.

Lt. Hagaman said the fire is now under routine investigation, but said there’s no evidence of arson. He didn’t know when investigators will complete their work.

While the origin of the fire has yet to be confirmed, Sub Rosa co-owner Evin Dogu said the bakery is in good condition, with most damage sustained in the apartments upstairs. She hopes to reopen the bakery after the building is inspected and brought up to code.

Plans for a food truck event to support Sub Rosa Bakery are in the works.

Paul Karns has confirmed that the nearby Ardent Craft Ales brew garage is unharmed.

@meghan_e Tom checked earlier and said everything looks okay in the garage. 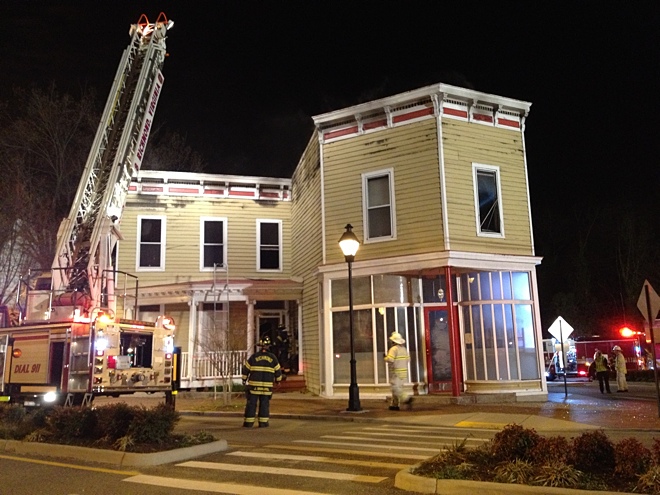 Last night the structure containing Sub Rosa Bakery, at 620 N. 25th Street, caught fire. No word yet on whether the fire started in Sub Rosa Bakery or if the nearby Ardent Craft Ales was damaged as well.

The building is now condemned. More as it develops.