At least on a few blocks of Grace Street. The results of months of work are starting to be seen by residents of the Fan as the lights above on Grace Street were turned on this week. This is the result of a larger Fan District Lighting Project.

Here is the latest project update from the city.

CURRENT WORK:
The installation of 51 of the new ornamental lights was made in late 2013 on the 2500, 2600 and 2700 blocks of West Grace Street. Delayed material deliveries and extreme winter weather has slowed the schedule for energizing these lights. Theses 51 lights are scheduled to be in service by the middle of April.
PENDING WORK:
The next phase of the project will be along Mulberry Street from West Grace Street to Stuart Avenue. In addition, work will begin on the eastern portions of West Grace Street to remove the existing shoebox light fixtures.

And here’s a map showing the whole project and what’s up next. 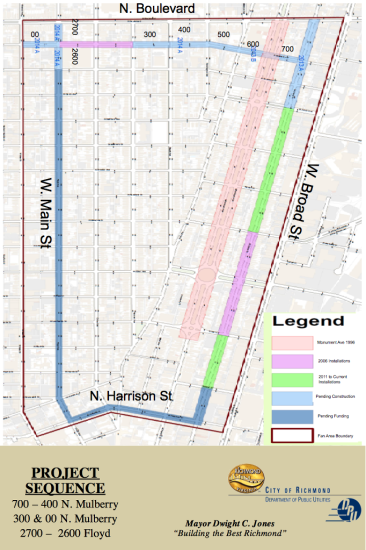 Thanks to local power couple Tim and Mary at 17Apart and who just recently scored a column on eHow for the picture.