Dave Brockie is back! Sort of. GWAR, Me, and the Onrushing Grip of Death will resume in two weeks. Until then, Dave gives us an account of his most recent tour in Europe, with a little insight and opinion thrown in there for good measure.

Dave Brockie is back! Sort of. GWAR, Me, and the Onrushing Grip of Death will resume in two weeks. Until then, Dave gives us an account of his most recent tour in Europe, with a little insight and opinion thrown in there for good measure. Enjoy!

Welcome back…to me! That is correct, I have returned to this place, this perch, this palace of pimply prose, to once again import and impair upon you…me! Dave Brockie, shameless self promoter and your guide to things both nasty and not so. I am currently in Europe on tour with the mighty GWAR, hence the title of this story.

The image above is the view from our parked bus this morning in Holland. Despite their recent World Cup loss, the Dutch were happy to see us, but not half as happy as we were to see them!

And speaking of Europe, it’s different! Here’s an example… did you know that people in Europe call their countries different things than we do, and they even call OUR country different things too? ALL KINDS of things, and some of them are extremely rude. Everything is at least a little different, like this replacement computer keyboard I got in Lindau, Germany, after a dog vomited on my original one. It’s like it was made for a different language or something!

So even though I wasn’t even in Europe for most of the time I’ve been gone, I will still use it as an excuse as to why I missed the last few installments of GWAR, Me, and the Onrushing Grip of Death. Now where were we?

Hmmm…it seems I kinda might have forgotten what I was writing about. Maybe I should go back and read the last few, or maybe I should have them read to me, while I just lie there on the couch playing Nazi Zombies for hours. I love that fucking game. I have it on my iPhone, on the bus, and in my living room. I am so glad I still play video games with the same fanaticism I enjoyed in my snot-nosed youth. In fact that game is the real reason I haven’t been doing shit on this thing.

Every time I come to Europe, I ask myself, didn’t these people lose World War II? Or at least get the shit blown out of them? If they did, then we need a war like that…one we mean to lose, so the rest of the world will give us money so they can have a good future trading partner. Because if you judge the worth of a culture by the standard of living that the people enjoy Europe rules and Holland is one of the crown jewels.

And not just because of the weed…or legal prostitution, or assisted suicide, or strict gun control, or tons of other stuff that makes life better for the Average Joe, and that will take decades to get in the US…and we will be smoking legal weed in the US a lot earlier than the day we give up our guns, as ridiculous as that sounds. And it is.

That’s a huge thing over in Europe. You can’t get your hands on weapons. So the chances of getting shot by a gun is pretty fucking small. You are much more likely to get knifed or get the sharp end of an afro pic in your eye. And that’s considering you are actually more likely to be abducted by aliens than be assaulted in Europe, unless of course you were fighting World War II. And while we are on the subject, didn’t we make our nation a gun culture because it needed to be one at the time, like when we were protecting our families from bears, or massacring Natives? Do we really still need to do that? Because I tell you what, it feels pretty good to walk around late at night in a city, and not worry about the very real possibility of being robbed at gunpoint. And NO, it doesn’t make it better that I have the right to carry my own weapon and maybe get the drop on my assailant and blast a chunk of his brain-case off. This is not the Wild West, the US is supposed to be a civilized fucking country, not a war zone…

I come over here and I look around, and I see the way these people live…they live very well… and I think about all the Americans that have died in European wars…that continue to die…for what? So the losers of the greatest war in history can live like kings while our country looks like a third world shit hole…and we are pouring money into…Afghanistan??? Fighting a bunch of cave men???

This is the bullshit we have waiting for us at home. The Republicans are busy tearing the Prez a new one, for the war, for the economy…same old shit, hell, did they at least cap the oil spill?

Did anyone ever stop to think that maybe the biggest reason, and maybe the ONLY reason, that the world wide economy has tanked is THIS STUPID FUCKING WAR? That maybe if we stopped shoveling billions of dollars into a flaming pit, if we stopped getting a lot of people killed and maimed and fucked for life and instead spent that cash on making this country as cool as Holland, then maybe everything would be ok?

But NOOOOO, all the Republicans can do is bitch. It reminds me of when Jimmy Carter was in office, one of the smartest, wisest, most capable Presidents we ever had. I mean the man was brilliant, and is still brilliant, well, he can still tie his own shoes; he just wasn’t nasty enough to be President, and he was attacked relentlessly, his entire administration, until he was basically run out of office. Sure, brother Billy didn’t help matters much when he pissed all over the runway at Andrews Air Force Base.

But I don’t give shit! Republicans, shut the fuck up…you had eight years to sort it out and you failed us. Yeah, I know you were doing pretty good, but the rest of us have been eating shit too long. Let the man work, for is that not the fairest measure of a man? And unlike some people in our recent electoral history, at least he won the damn election fair and square. Shut the hell up FOR ONCE, and let the man do his job, then maybe, just maybe we might be able to get out of this ever increasingly unendurable black hole, which we struggle to escape the gulf of horror that 9/11 cast over our world. It has enveloped us in its deadly cloud just as surely as the people of Manhattan were engulfed in the pulverized debris of the destroyed Twin Towers. And I am fucking sick of it!

Life doesn’t have to suck, just ask the people of Holland… 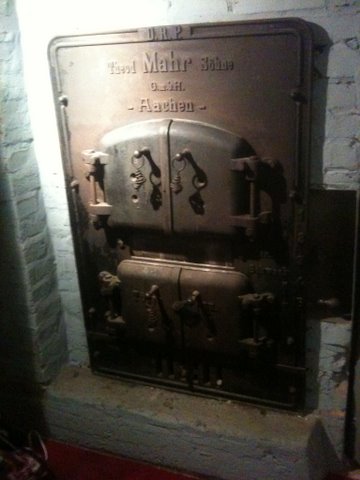 Here is the oven from the bunker. Himmler used it… to make bread.

I don’t know where that came from but it was on my mind. So we will try to lighten it up around here. The other night we played at a huge concrete bunker in Aachen, Germany that has been converted to have a club down in the cellar. The fort was built in 1941 by the Nazis to serve as a an air raid shelter and later as a headquarters of the Siegfried Line. At one point, Heinrich Himmler, head of the S.S., held a big event here, right before the Americans attacked the place, kicking off three weeks of bloody street battles. At one point a 1,000-kilogram bomb hit the place, and the exterior is all chewed by the spattering steel. We played a great gig here.

Sometimes its rough going down memory lane when the past of today’s present is pretty damn interesting.

Wow, I am all over the place today! But fret no more!!! For now it is time, now for, once again, and all that shit, the latest, the greatest, the not written quite yet but about to be, 25th Episode of…

In two weeks here at RVANews.com!