DROP THE NEEDLE! Round 2!

It’s back! For our second ever round of Drop the Needle, we invited pianist Bob Hallahan to judge, and there’s not a more perfect time to have him do the honors.

It’s back! For our second ever round of Drop the Needle, we invited pianist Bob Hallahan to judge. I know what you’re thinking: “Two pianists in a row?” But there’s not a more perfect time to have Bob do the honors.

After 28 years of teaching jazz piano, small jazz ensembles, and other classes in an adjunct capacity at VCU, Richmond is losing him to Harrisonburg where he’ll start teaching full-time at James Madison University in the fall. This means his final semester at VCU just came to an end.

Earlier this year, he put out a duo record with guitarist Adam Larrabee called “the street where you live.”

And finally, more than fitting was Daniel Clarke’s shout out to the man on the last Drop the Needle. Bob has clearly touched many people’s lives, myself included. You’re bound to leave some kind of mark when you teach for almost 30 years, but making such positive impacts comes only from being a great educator and a great musician. Bob is both. You can learn a little about him after the jump, but first, a refresher on the rules:

With this series, we hope to create a forum for Richmond musicians to track the city’s improvisational scene. Part mix tape, part musical journal, part contest. Call it what you will, DROP THE NEEDLE is open to everyone in and around our beloved city. Here are a few ground rules:

I read that one of your first breakthrough moments as a young musician was hearing Jimi Hendrix live. You’re obviously an incredibly accomplished jazz pianist, but what would someone be surprised to find out about you musically?

Probably for starters, that I began my life in jazz as a self-taught guitarist, first getting into the Beatles, then later Hendrix, Clapton, et al (I actually destroyed a very cheap guitar on stage one night at the teen club playing with my rock band). Then I snagged the guitar chair in my high school jazz band and discovered Wes Montgomery and Kenny Burrell. Though my major instrument in college was piano, I continued to gig on guitar until I graduated, then settled on piano. Other things: In the 70’s I wrote two musicals based on some biblical stories for a northern VA church, played regularly with an improvisatory dance/theater group in D.C., and for about 6 months played on a top-40 band 6 nights a week in a D.C. hotel lounge – forgive me, it was the disco era, jazz was dying and I needed the $$! 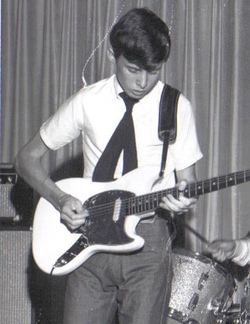 “Playing my Fender Musicmaster II on a gig with the Disciples of Sound, probably sometime in 1967 or ’68.”

What’s your favorite memory of teaching at VCU?

Man, after 28 years, it’s not only hard to pick just one, but it’s hard to remember a lot of it. So I’m going to evade the question by offering multiple answers, and say that among my fondest memories are: working with all the numerous small jazz ensembles over the years to actually MAKE music and not just practice and study it; learning a lot more about the music (and myself) in the process of teaching and sharing it with others, both students and faculty; getting to hang out with, observe and learn from the likes of great players and teachers like Barry Harris, who came to VCU for several residencies in the 90’s; the 1984 Jazz Orch I trip to Eugene, Oregon, which was both a pain in the neck and a great hang!

As an educator, have you noticed any trends of student behavior through time from when you started teaching at VCU in 1981 to today? More of a desire to move on from jazz fundamentals to more funk-based or experimental genres, perhaps?

Things haven’t really changed that much from what I can see, except that now the music is much more accessible than it’s ever been thanks to the digital age, but many students still don’t listen enough. Students (myself included) have always been more inclined to focus on the present musical moment, whether it was funk and fusion, experimental or jam-band music, and that’s cool. The challenge is to also get someone to keep digging back further in the jazz tradition to come to terms with the basis of the musical present. 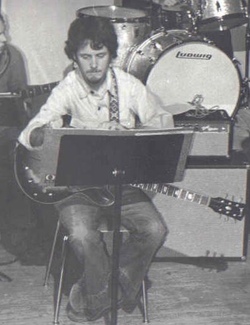 You’re returning to Interplay Jazz Camp in Woodstock, Vermont, this summer to teach, right after this round of Drop the Needle is done, actually. Can you talk a little about the camp and the significance of pairing yoga with learning about music?

It’s significant in that it helps to grow the musician themselves as well as their musical abilities. In pursuing any music, and I think especially jazz, you have to be willing to take a look at who you are and be open to expanding your awareness if you want to expand your musical skill and message. It’s not just what you play and how you play it, but also what you have to say. Yoga (and I’m also including meditation, breathing exercises, etc. when I use that word) serves to integrate the individual more fully within themselves and with their environment, which is what we’re trying to do as musicians — communicate something beyond the ordinary realm of experience from within ourselves in a way that resonates with the listener. At Interplay we have the same offerings you find at most other jazz camps: master classes, combo rehearsals, theory classes, etc. but supplemented with an underlying theme of developing greater self-awareness and skill in minimizing the psycological and emotional obstacles to musical growth that we all tend to create for ourselves. We’ve still got room for more students this year’s summer workshop if that sounds good to you – just google Interplay Jazz. 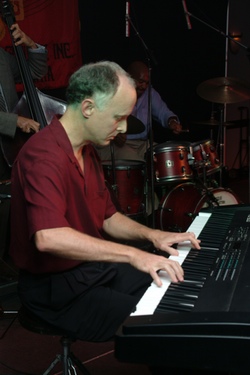 What do you hope to hear in the submissions for Drop the Needle? Is there anything else you want people submitting tracks to know about you?

I just hope to hear some music that’s creative, thoughtful, fun (or serious), engaging and groovin’.  I’m a jazz head, for sure, but I’m open to and enjoy getting exposed to any other styles and genres, as long as there is genuine feeling and musical skill involved.

And the classic question with the necessary modern twist: what’s playing in your CD player / on your iPod / on your computer right now?

I’ve got a concert coming up with Robert Jospé and Inner Rhythm this summer for the Wintergreen Performing Arts series that will be all music of Joe Zawinul, so in addition to all his work with Weather Report, I’m checking out his recordings with Cannonball Adderley and his first solo record, “Zawinul,” which has a pre-Miles version of “In a Silent Way.” A very swinging cat! My favorite Weather Report records are the early one’s, like “I Sing the Body Electric” with Miroslav Vitous, bass and Eric Gravatt, drums — very free music, not as funk-oriented as later Weather Report outings. Speaking of Miroslav, another very openly structured recording I love is his “Mountain in the Clouds” (originally released as “Infinite Search”) with Joe Henderson, Herbie Hancock, John McLaughlin and Jack Dejohnette — that is some intense and compelling music boys and girls! I think I’ll go put that on right now!

The deadline to get your tunes in for this round of Drop the Needle is 12 am on June 11. Get going!