Develop exports as a way to diversify and strengthen Richmond’s economy. Compared to other states like Nevada and Michigan, Virginia was spared the worst of the Great Recession. With the recession in the rearview mirror and the recovery, although anemic, starting to take hold, Virginia finds itself lagging economically. Richmond should focus on promoting and developing exports in order to diversify and strengthen its economy.

The fundamentals of Virginia’s economy are strong, but last year was abysmal for growth. Virginia finished 48th out of 51 with 0.1% GDP growth. Only Alaska, Maryland, and Washington D.C. finished worse. 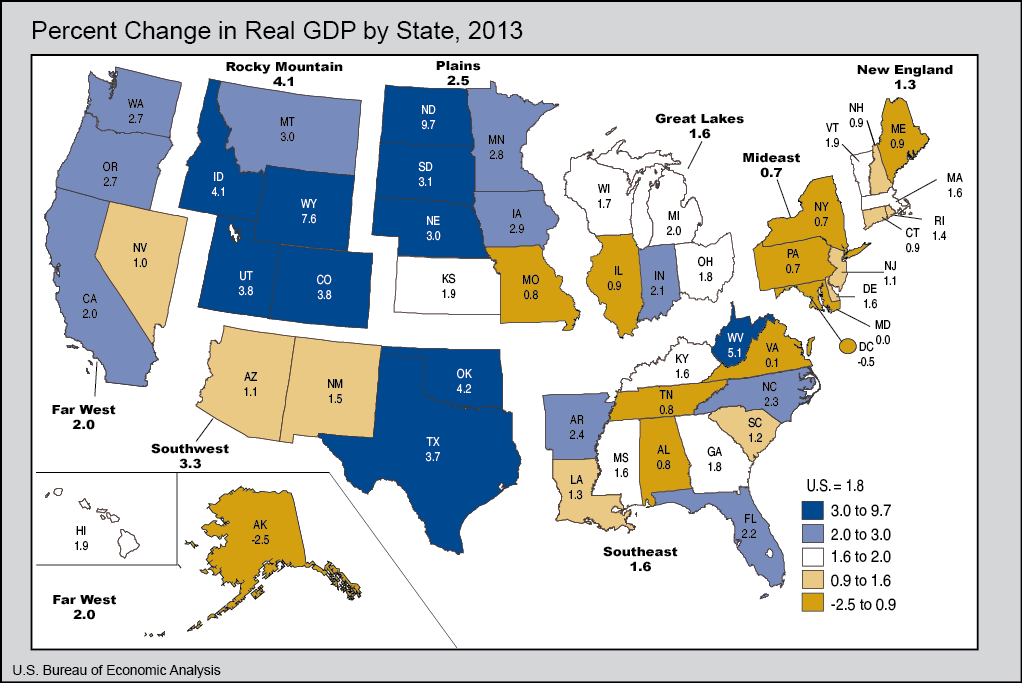 The high concentration of state and federal government jobs, combined with the political situation surrounding the budget, was a serious drag. Considering the political climate and the state budget crisis, 2014 and 2015 don’t promise to be much better. All of this raises questions about the future direction of Virginia’s economy.

In The Metropolitan Revolution, Bruce Katz and Jennifer Bradley tackle this issue by looking toward a global network of trading cities. “The Great Recession unveiled the limitations of an inward-looking domestic economy driven by home building, shopping, and excessive debt.” Richmond can add government to the list of inward-looking industries with limited growth potential, so what’s left?

Exports need to be a focus of the local and regional governments as well as medium, and large businesses. Despite a large freshwater port, being within a day’s drive of 2/3rds of the US population, and a high concentration of Fortune 500/1000 companies, exports have never been a driver in Richmond. They currently account for 6.3% of the Richmond MSA’s $68.5 billion GDP. That’s well below the 14% national average which is well below 31% in Canada, 29% in China, and 25% in India.

Data from the International Trade Administration

The federal and state government may seem like wardens of trade, but trade has always happened on the city level. Katz and Bradley continue, “throughout history, cities have been the heart of global commerce, forming trade routes, crossroads, switching points, and meeting places.”

Thirty years’ obsession with the idea of consumer cities and ‘Starbucks, stadiums, and stealing business’ strategies have created confusion about what drives what in metropolitan economies. Katz and Bradley

Richmond’s leadership is clearly focused on infrastructure like stadiums and bolstering consumer spending through shopping development, but it’s tough finding speeches or programs aimed at increasing exports. This needs to be a part of the conversation as to how to turn Richmond into a next level city.

The main two drivers of exports are going to be the acquisition, retention and development of human capital, and the development of lasting international relationships. In addition to being more accommodative of immigrants (Day #016), Richmond needs to leverage its existing institutions.

VCU has a large international population as well as a campus in Doha, Qatar. How can businesses and the local government provide resources to these individuals and programs in order to create business opportunities abroad?

Richmond is also sister cities with Richmond-upon-Thames, England; Saitama, Japan; Winheok, Namibia; Zhenzhou China; and Segou, Mali.1 Sister Cities is a program developed during the Eisenhower administration to strengthen cultural and educational relationships. Richmond occasionally sends and receives delegations from these cities, but it is underperforming on these goals. Namibian art isn’t easy to find in Richmond. VCU isn’t encouraging students to study in Zhengzhou, China (which has a massive economy in China).

The international economy took a turn for the worse in the third quarter and the appreciating US dollar certainly won’t help exports, but exports tomorrow are the result of work today. Developing relationships today will boost exports in the coming decade when they will be needed the most.

There is no better model for Richmond than Portland, Oregon. The city increased exports by 109.3% between 2003 and 2010 and now 18% of its GDP comes from exports. In 2010, they planned to double it again, although economic conditions will probably leave them short of that target.

Their experience from ’03-’10, goals for the future, and a partnership with the Brookings Institution resulted in the Greater Portland Export Plan (PDF).

Richmond should print it out, cross out Portland, and follow the steps:

Portland started with a market assessment so it could set realistic goals in line with its industries. It targeted its plans toward its role as the “Silicon Forest” and as a green city. Portland’s granola credibility is genuine, but part of the reason we know about it is a campaign called “We Build Green Cities.”

Richmond isn’t a huge manufacturer, but it does have a highly skilled services industry and a fresh-water port like Portland. The Port of Richmond is owned and leased-out by the city of Richmond and is in need of some upgrades in order to expand barge service. The barges are valuable because they allow crates that go through Norfolk International Terminal to avoid highway traffic. The city has to develop its strengths.

Fewer than 1% of American companies export. Portland focused on catalyzing under-exporters in manufacturing and giving tools to small-businesses so they could join the international economy. This included a web portal with information and services and a case-management service.

It’s not just us selling each other microbrews. What you really need is a culture where manufacturers or entrepreneurs begin to include foreign markets as part of their strategy. Tom Hughes (Portland’s Metro Council)

In the 2010 State of the Union, President Obama set a national goal, “We will double our exports over the next five years, an increase that will support two million jobs in America.” This created some chatter around Richmond, but the MSA’s exports have actually fallen since then.

In April, Business First Greater Richmond started talks about the Greater Richmond Export Initiative. Hopefully the results are longer lasting and more meaningful than the local initiatives inspired by the State of the Union.

Governments operate within borders, but their citizens’ lives spill across them daily. Richmond’s businesses are scattered throughout the metropolitan area, so no plan limited to any one part of area will be as effective as a regional plan.

Alone, Richmond is an insignificant southern town of 214,000 people. But the unified MSA is 1.26 million, a number with some economic weight and global potential. A unified plan between Richmond, Hanover, Henrico, Chesterfield, Hopewell, and Petersburg has the potential to be greater than the sum of its parts.

In short, a new global map is being drawn in the world, not of nation-to-nation trade, but of metro-to-metro exchange based on distinctive clusters, specialized expertise, and cultural affinity .Katz and Bradley

There is a saying that goes, “never let a crisis go to waste.” Virginia’s economy was relatively strong during the Great Recession and drastic changes never really happened. Now, Virginia’s crisis appears to be slow developing. Failing to seize this opportunity to join the new global map would be a terrible waste.