Progressive and library usually don’t go together, but libraries create unique opportunities for everyone to come together that are too important to ignore. Public libraries are amazing. For the price of the occasional late fee, anyone can check out an incredible range of materials, have a place to work, and be a part of a community. Richmond public libraries do a great job with resources while sometimes unfairly being burdened with the task of fixing broader social issues than should ever be mandated of a library.

Nine branches offer a wide range of events for free while maintaining a law library and keeping the city’s archives. This is not an accomplishment that should be overlooked, but it also isn’t a reason to stop exploring. RPL should experiment with environments, digital co-working options, and new services while strengthening their community and furthering their mission.

With so many locations, it would be interesting to experiment with different environments at the library. Richmond’s Coffitivity has racked up awards for its creativity inspiring ambient noise app. Maybe some zones at the library should forgo the shushing librarian.

That’s what the denieuwebibliotheek (video) on the Stadhuisplein in Almere, a planned town on the outskirts of Amsterdam, has done for the past five years. Upper stories are still reserved for quiet study, but lower floors and the atrium are awash in soothing sounds that cancel each other out. A piano that is open to the public sits immediately inside the front door of its main branch.

Director of communications for the library, Marga Kleinenberg doesn’t mince words when she talks about the library’s mission. “We feel that shushing librarians are killing our image. Make patrons feel at ease and regularly treat them to something new/else–in our view that is the way to persuade them to keep coming.”

The creativity doesn’t stop at ambiance. denieuwebibliotheek also belongs to Seats2Meet. The website brings “knowmads” together in sort of popup co-working spaces.

If the prices at a space like Gather RVA are any indication, there is significant demand for workspace. Creating a limited environment for affordable spots that capitalizes on any of the libraries surplus capacity could help aspiring businesses take their first steps.

In a city deeply concerned with fighting poverty and creating jobs, a well executed streamlined program could be the launchpad for creating a business. This environment could also bring entrepreneurs and social capital together. The opportunities and network effects are obvious, and they could be a public good offered by the library.

I’m sensitive to not over-expanding the mission of the library and protecting regular users, but this could be an interesting opportunity to bring people together in unprecedented ways.

Finally, Friends of the Library is doing a great job augmenting the library’s funding with a book sale and donations, but it may be interesting to create a fee system with expanded services.

Richmond has 107,000 active library cards. That’s over 50% of residents. 32% of residents in Almere are dues paying members of the library.

No one should ever be turned away from library. Ever. But any profitable function the library can offer to cross-subsidize the expansion of other services is at least worth entertaining. I know individuals who would subscribe for practice room access in a basement. After-hours meetings spaces are another option. Libraries have huge fixed capital costs and unbelievable assets that can be monetized while expanding services.

Public libraries are a unique opportunity to bring everyone together in pure pursuits. Recently built on reclaimed land, Almere decided to center their culture around the library, and it is clearly paying dividends. Richmond Public Libraries don’t need a revolution, but denieuwebibliotheek is fodder for ideas as to how to take the next step.

At the very least, their librarians talk unlike any other librarians in the world: “The reason for these diverse service is to prolong the visits of our patrons. One doesn’t have to leave the building because a lot can be done here. You don’t want to leave this building because it’s fun here. So, the longer patrons stay here, the more they see and the more they borrow.” 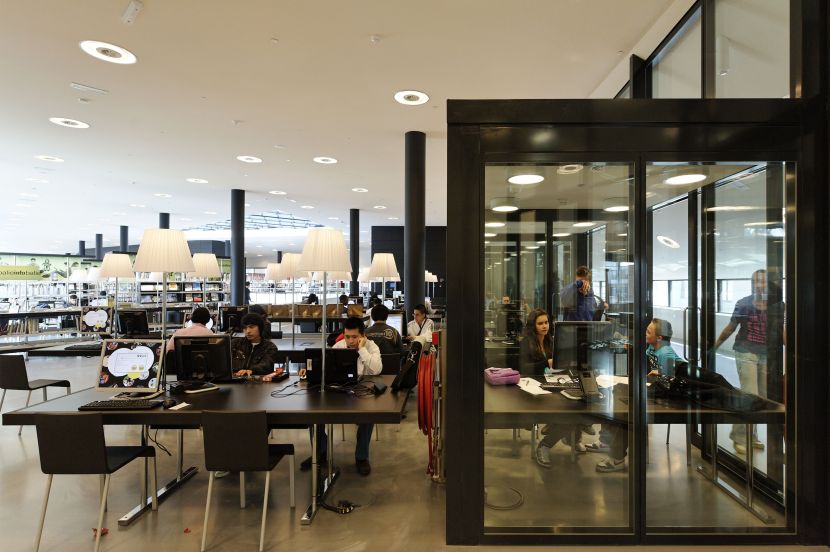