Cities are full of problems where idealism clashes with pragmatism. On Day #013, I called for better access to drinking water. Well, what goes in, must come out. More public restrooms could limit public urination while adding a valuable city service.

In a perfect world, restrooms in stores, parks, and public buildings would be open during the night–there would be no lines in bars, the homeless would have a private place to go to the bathroom, and everyone else would wait until in the comfort of their homes. Unfortunately, the ideal world is far from reality. Fortunately, there is a spectrum of options available for increasing public access to restrooms.

I’ve rated each of the follow options based on four factors. Cost: the cost to cities and users. Cleanliness: does it require cleaning or maintenance? Effectiveness: how well it eliminates public urination and increases convenience. Safety: is it so private that crime can happen on the inside? 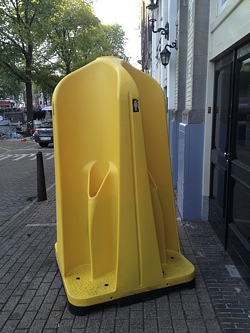 At the low end of the low end is 4-person urinal. A common sight in Europe, America probably isn’t ready for this efficient invention. Personally, I love it. Putting three of these on Brown’s Island during Friday Cheers would free up all of the classic porta-johns for females while shrinking lines. They would also be effective in Shockoe Bottom and around other festivals. In the Netherlands, they even have a version that retracts into the ground. 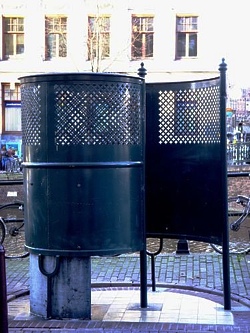 The next step up is the “Amsterdam Urinal.” These green metal mainstays in the streets of Amsterdam are the epitome of pragmatism. They would be slightly more acceptable in America than the previous example, but they are still a reach. 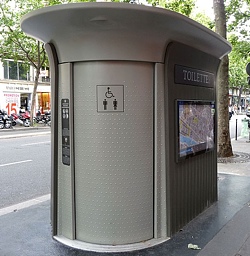 Some cities are going as far as installing self-cleaning public restrooms. In San Francisco they are free but have been plagued by maintenance issues. In Germany, they usually cost a small fee but are extremely effective. In places where many restrooms are needed like Browns Island, a few with fees could be installed to compliment the classic porta-john and to offset costs. 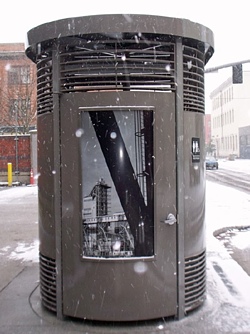 The newest and most innovative option is the “Portland Loo.” The public toilet is so popular it has its own Twitter and Facebook. The design is Portland’s first patent.

Learning important lessons from problems around the world, the loo is free, has no running water inside, no mirror, bars at the bottom and top so police have some ability to monitor, graffiti-proof exteriors, and it is made from stainless steel.

The city recently sold one to Victoria in British Columbia for close to $100,000 with maintenance costs around $12,000. The Portland Loo has a bizarre cult following, which is far from the worst thing to happen to a public restroom.

Idealism clashes with pragmatism when adding street-level services that enhance the lives of the homeless. Increasing access to drinking water, installing a homeless survival station (Day #021), and bathrooms would make Richmond even more attractive to the ~7,600 homeless people in the state of Virginia. I try to not think on that level, but administrators do. I’ll leave those big decisions to the representatives of the people.

Richmond doesn’t have the budget to build a comprehensive system of world class public restrooms, but a few strategic upgrades and well placed facilities could significantly enhance the daytime and nighttime experiences of everyone.