An ode to those who said, “I want to be an electrician when I grow up” and didn’t let our culture talk them out of it. The culture of college in this country borders on cult. From the selection of preschools until move-in day, there’s an unquestioned assumption that college is the only and ultimate tool for the future. Not only does this mindset allow students who could be successful in other environments to fall into the cracks, it may not be true anymore.

America is facing a glut of college degrees . The returns from going to college are realized over a lifetime–which spells trouble for individuals making longterm earnings decisions. What’s being paid for by debt today may be worth very little 30 years from now during the prime earning decade of graduates. Richmond needs to change its culture around skilled-trade training while opening up more opportunities in skilled-trades to build a diverse labor force.

Even scarier than the potential decline in the returns of a college diploma are the problems facing the thousands of Richmonders who go to college but never don the cap and gown. Student loan debt now exceeds a trillion dollars. VCU’s four year graduation rate is 30%, and the Rams’ six-year graduation rate is 57%. With a first-year retention rate of 87%, there are thousands of students piling up debt without the benefit of the paper to back it up.1

Meanwhile, the nation is facing a shortage of people in skilled trades that’s only going to get worse due to demographic changes. Richmond needs welders, electricians, and HVAC mechanics–and other cities along the East Coast are in even greater need. Trade schools and apprenticeships enable students to learn these skills at a fraction of the cost of college and in half of the time. While yearly earnings may be marginally lower, lifetime earnings can be comparable.

Wage polarization is happening due to the automation of routine tasks combined with the amplification effects of computers on workers with non-routine tasks. High-skilled trade workers could help strengthen the middle class while strengthening the fundamentals of our consumption based economy.

In addition to wage changes, employment isn’t even close. 6.1% unemployment doesn’t fully capture the condition of labor markets. Millions of additional Americans are part-time for economic reasons or have left the labor force, and much of that burden has fallen upon those without college degrees. A stronger emphasis on trade schools could help close this gap. 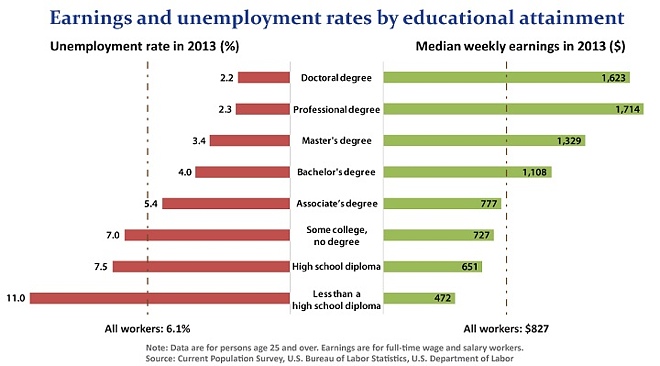 A few weeks ago, I spoke with school board member Kristen Larsen. She was quick to point out that skilled-trade education is “super important.” Richmond Public Schools have hired a director of career and technical education, but the stigma is still a bigger battle. Larsen added that CTE training doesn’t guarantee that students won’t go to college. Instead, it can give them the financial tools and soft skills to get even more out of college without piling on the debt.

In addition to dropping the stigma, Richmond needs more institutions for trade skills and a stronger apprenticeship system. ECPI is one of the only accredited institutions offering skilled trade training in the area. Federal student loans and easy money for college are a huge driver of rising enrollment and tuition. It would be great to see more of the same opportunities extended to trade schools without the inflationary pressures.

It’s tough to predict what Richmond’s labor market will look like in ten years–much less three decades. People are making the best with what they have with limited information about the future. Regardless of the changes that do occur, Richmond will be best served by encouraging and developing a skilled and diverse labor force ready for the rewards and challenges of the 21st century economy.