Have you ever tried crossing Monument Avenue at Lombardy? Roads, bike lanes, and sidewalks are the arteries of Richmond. Tens of thousands of people work their ways through the city by car, bus, bike, and foot every day. All of these people and all of these modes of transportation interact in countless ways.

Efforts to increase “bikeability” are in full force in Richmond. I applaud the efforts of those working to build protected bike lanes and the Floyd Avenue “RVA Bike-Walk Street.” This is quite simply the future.1 Richmond’s walkability, however, needs work.

Pedestrian deaths and accidents aren’t a daily affliction plaguing the streets of Richmond,2 but there are thousands of negative pedestrian experiences that involve dodging 2,000-pound pieces of metal of flying down the road.

What makes a good intersection? There are only two metrics that matter when it comes to intersection design: safety and efficiency. Roads haven’t always met these two goals, but really smart people are starting to improve safety for everyone and efficiency for pedestrians and cyclists.

In 2012, the Federal Highway Administration released nine “Proven Safety Countermeasures.” Four are directly related to intersections: medians and pedestrian crossings, pedestrian hybrid beacons, road diets, and roundabouts. Also Suburban Nation: The Rise of Sprawl and the Decline of the American Dream, makes the case for squaring out the corner of intersections and limiting pedestrian exposure.

The intersection at Monument Avenue and Lombardy may be the worst intersection I have seen in the entire world.3 Crossing the street is an exercise in bravery, luck, and speed. Several changes would bring this intersection and others into the future of road design. 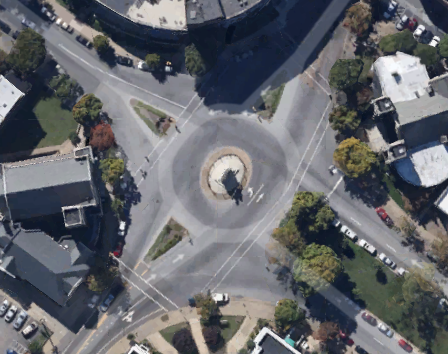 Road safety starts with design that forces drivers to do things instead of asking them to do so. Narrower lanes and sharper turns are significantly more effective than any signage. Rounded corners like the ones in the image above allow cars to fly around corners at high speeds, they encourage people to turn right on red without coming to a complete stop, and they hide pedestrians behind parked cars. The flowing circles of Monument Avenue are nice to look at, but they limit access to pedestrians.

The best view of one of Richmond’s most historic streets should not be from an automobile. Instead of pseudo-roundabouts and jumbled intersections, Richmond could square off all of the intersections and create viewing areas/parks for each monument.

The above intersection has medians, but the exposed sections of roads limit their effectiveness. Every lane for turning should be further separated by medians for pedestrian crossing. These can be used as islands of refuge in addition to forcing cars to turn and face pedestrians.

Adding lanes does not significantly reduce traffic in the long run. This study (which changed my life), empirically proves that “every 1% increase in new lane-miles generated a 0.9% increase in traffic in less than five years.”

This is because of “traffic inducement” or “induced demand” and it’s why most cities in America have wasted millions of dollars in development since the end of WWII.

Lane diets take four lane roads and reduce them to two lanes of traffic and a shared turn lane in the middle. This opens up space for bike lanes, pedestrian crossing islands, wider sidewalks, and more parking.

Roundabouts are currently very popular. They “limit serious accidents” and provide an island of refuge for pedestrians. Two problems: all accidents are serious for cyclists/pedestrians and islands of refuge can be created without roundabouts.

I’ll concede that roundabouts limit idling cars which is better for the environment, but all statistics for roundabouts are in relationship to what I consider poorly designed intersections. The FHA even admits that “the safety performance of all-way stop control is comparable to roundabouts (per the HSM).”

Roundabouts are dangerous for cyclists, provide no advantage to pedestrians, and are highly inconvenient for the blind and people who use wheelchairs.

Even more could be done to increase the safety of this specific intersection: add pedestrian-friendly signals, improve the drainage around wheelchair ramps, increase the lighting so crossing at night is less of a nightmare. These are complaints about just one intersection in Richmond.

If Richmond focuses on making these improvements to its intersections for the next decade, RVA will undoubtedly be a better and safer place for automobiles, cyclists, and pedestrians.