Members of the SFJAZZ Collective are culled from the top artists in modern jazz. Together in the San Francisco-based organization, they are dedicated to jazz education and presentation of the music of jazz icons, and on Wednesday at the Modlin Center, bassist Matt Penman and the SFJAZZ Collective will perform arrangements of compositions by Horace Silver.

Matt Penman is a first-call bassist who is building an international reputation as a modern jazz artist. From his home base in New York City, he keeps busy touring with a variety of projects fronted by John Scofield, Joe Lovano, and many others. Since 2005, he also has been a main fixture in the SFJAZZ Collective, an eight-piece ensemble consisting of some of the top artists in modern jazz. The Collective is brought together through the non-profit organization SFJAZZ, a presenter of jazz performances and educational initiatives in the Bay Area. The SFJAZZ Collective keeps busy with two annual tours in support of their large body of recordings, which feature original repertoire by band members, along with tributes to major icons like Ornette Coleman, Thelonious Monk, Wayne Shorter, Herbie Hancock, McCoy Tyner, and John Coltrane. Its latest release is a collection of interpretations of the music of hard-bop pioneer Horace Silver. In talking with Penman, he explained the process that helps this tight-knit collective create imaginative arrangements of the music, and what is in store for SFJAZZ in the coming years.

RVANews: So you all are focusing on presenting music by the most heralded jazz composers of all time. The group started with Ornette Coleman, has gone through Thelonious Monk and others, and now you are up to Horace Silver, correct?

Matt Penman: That’s right, that’s one of the sides of the band. We pay tribute to a great composer/improviser in the world of jazz. These are people that have left behind a very important body of work. Each of us does arrangements of tunes by these musicians, and we try and respect the original intent of the music but at the same time breathe new life into it, like by arranging it in a current way that we think is relevant to now.

From listening to the recordings, it sounds like the arrangements are pretty wide in scope. There’s an arrangement of Silver’s “Señor Blues” with a backbeat, for example.

Eric Harland’s arrangement, yes. We’re not necessarily trying to make them modern or “2010,” but all of us compose and arrange in a way that is naturally relevant to the time that we’re living in. The great thing about a composer like Horace is that his tunes are so versatile and universally timeless that you can do such a wide variety of things with them.

So when the Collective is planning the music, how do you all pick what composer to take on, and which tunes to arrange?

It’s also very wide open. Everyone has a say in which composer we’re going to do in a given year, but then it’s basically open season on that composer’s oeuvre. You basically choose the tune that you want to arrange before someone else grabs it, you know [laughs]. And it’s just as well, because the people we choose always have a lot of tunes.

In addition to paying tribute to these different composers, there are also features for the members that are currently within the band, is that right?

Yes, that’s the other side to the band. Everyone writes an original every year. So we constantly have this mix of arrangements and originals. Of course the original can be anything you want to write for eight members. That’s always exciting to see what people write every year, because there’s a huge diversity in styles and I always look forward to see what people come up with. The same people can come up with radically different stuff year after year. It’s awesome.

How did the SFJAZZ Collective start? Was it always eight members?

It’s always been eight, actually. It started as an idea of Joshua Redman, who was artistic director of SFJAZZ at the time and Randall Klein, who is the executive director. It was their brainchild to put together exactly this kind of composer’s collective that was in many ways a functional musical democracy where every member was an arranger, a leader, and a composer, as well as being a sideman within the group. So this was their concept back in 2004. I was brought in during the second year in 2005, so I’ve been there nearly from the beginning. So I’ve seen it develop and grow over time.

It’s really a great thing and very unique in the world of jazz and in the world of contemporary music, I have to say, because the thing with jazz is that everyone contributes creatively because you’re improvising. In this band, you’re even more invested because you have your own writing in there as well. We also contribute in the way that we make suggestions during the rehearsal process. We rehearse for about nine or ten days before we start the tour in the spring. So that is a big workshop where we really nut out the tunes and edit, and try different ideas and see what’s going to work. It’s experimental, but at the same time it’s about getting the parts together, because there’s some ambitious writing that goes on.

You’ve worked for a number of years with members like Joshua Redman, Miguel Zenón, and others that have been important creative voices in jazz. Before you became an SFJAZZ member, what sort of projects did you do leading up to that?

Well I was playing in all kinds of projects, and still am [laughs]. The Collective works for a maximum of about two months of the year, and that enables everyone to continue with their own solo careers and bands, and all the other projects that they might be involved with, which is very important because you have to grow with different influences that you take in. Of course, it’s difficult to keep one band working throughout the year. That just doesn’t happen anymore. The Collective is something that meets for a specific period once or twice a year. We have a spring tour and then one later on in the year. So that way people can commit for that period of time. You don’t get any double bookings or too many substitute musician scenarios where some member can’t be available, and then that newer person has to rehearse the music.

Yeah, and these tunes are not easy, from what I’ve heard so far. Of course with an all star line-up, the substitutes are equally adept at handling the music.

Oh, absolutely. The unique situation with this band is that we have this rehearsal period of quite a few days, which doesn’t generally happen in the world of jazz. But people write ambitious music with that period in mind. So we can actually explore with more possibilities than the normal formula of one rehearsal, trying it again at sound-check, and then it’s time for the gig.

It sounds like you get a lot out of those rehearsals, and that you all can dig in more. 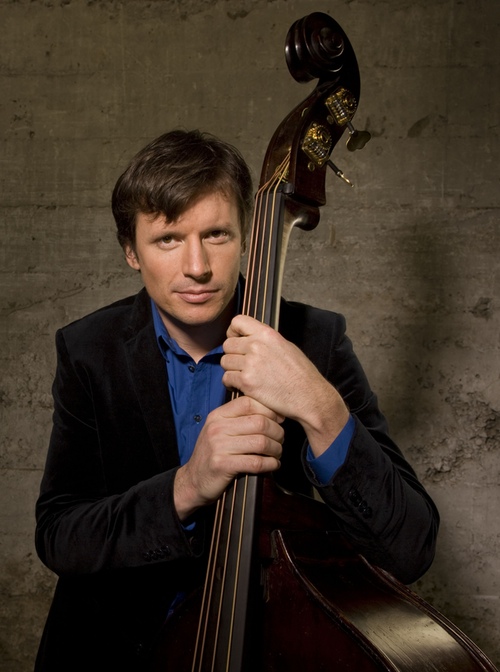 In addition to touring, you’re an educator as well. Do members of the SFJAZZ Collective work for the educational programs under the SFJAZZ bubble?

Yeah, everyone contributes to that. I think the educational component of the band is going to increase in the coming years, actually. We work every year with the SFJAZZ All-Stars, which is a group of young musicians from the Bay Area and slightly beyond. They meet once a week and have a big band and a small group, with very talented high school musicians from all over California. We always try and meet with them and do a master class. In October when we’re on the road, we’ll do outreach activities depending on where we are. We’ll do master classes, compositional master classes, and playing. I think that’s important to everyone in the band, even when they’re not with the Collective, actually.

Great! Is there something that shapes the way you teach?

I always try and encourage people to work out what it is that they love about the music, rather than think about the things that they have to do. It’s easy to lose yourself in all the things that you have to know in order to play jazz, and sometimes you can lose the love of playing music. There are a lot of things to get together, just like with classical music. There’s a discipline involved, but you should never lose sight of the fact that it’s an art form, and what you’re aiming for is to have freedom to express yourself in that art form. So everything that you learn, the discipline, should be aiming towards being free in the language of the music.

And is that a part of how you define yourself as a musician now?

That’s a nice way to look at it. You mentioned being an improviser, and I think that relates to the conversational nature of it.

Definitely, and the analogies with language are good, I think. They’re accurate.

Listen to “Song for My Father” (Horace Silver, arr. by Edward Simon):

So now that you’re getting ready for the second tour, what comes next for the Collective? Will there be another composer that gets chosen next spring?

This tour we’re going to be revisiting the music that we’ve worked on in the spring, the originals and the Horace Silver arrangements. It’s always fun on that second tour, because all the hard work has been done in terms of getting the music together, and everyone has that music inside themselves. We really know those tunes now, and what ends up coming out is even freer than before, because now we’re using these great tunes as vehicles to improvise over. I’m really looking forward to it, because there’s going to be a joy and a freedom involved. In terms of next year, we’re actually going to be working with Stevie Wonder.

Well, people think of him as a pop artist, but his tunes are very sophisticated.

I think I was expecting someone more within the jazz world like an Ellington or something along those lines.

It’ll be fun, and it is a little different, definitely. The other big news is that SFJAZZ is planning its own building in San Francisco. The Collective is looking forward to getting in there and trying out the new space, and using it as a base.

Yes, it sounds like it’ll have quite an impact over there as a new jazz spot.

Yeah, absolutely. There’s actually no stand-alone building for jazz in the States. So it’s in the works, and they’re planning on breaking ground next year. SFJAZZ is in full fundraising mode at the moment. And that will be where we do our residency and our educational activities. It’ll be a very useful spot for the Collective and for everything else involved in SFJAZZ like the Festival and spring season.

Well we’re looking forward to you all coming down to Richmond for your performance at the Modlin Center.

Thanks, looking forward to meeting the people there, and the jazz lovers.

Yeah, there’s a very creative scene with lots of new music here for such a small city.

Yeah, that’s what I’ve heard. Looking forward to coming down, for sure!